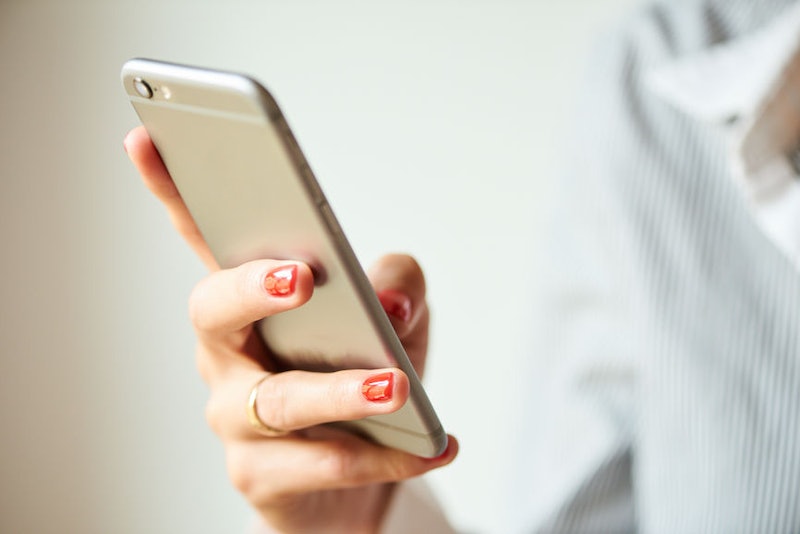 As someone who's read every single advice column on the internet, I say the following with some confidence: a solid 20 percent of contributors write in after finding something they didn't like on their partner's phone. And a solid 99.999 percent of advice column writers agree that in most cases, going through someone's phone without permission isn't a great thing to do, whether you find something incriminating or not. But could snooping on your partner's phone end your relationship? A new study says yes — and in more cases than you might expect.

Researchers from the University of British Columbia, Canada, and the University of Lisbon, Portugal, conducted a study into why people snooped and how it affected their relationships. "Smartphones are highly personal devices. Those who access our smartphones can nd the digitised minutiae of our existence — information which may not be interesting to anyone, except to ourselves, and to those closest to us," the study authors wrote. "The possibility of unauthorised access by 'insiders' is, for smartphone users, a common concern."

Study author Ivan Beschastnikh, a computer science professor at the University of British Columbia, said in a press release, "In cases where the relationship ended, it was either because the phone owner felt their trust was betrayed or the relationship was also experiencing difficulties. Another main reason was the relationship was not that strong or important to begin with, as was the case with two work friends where one stole valuable contact information from the other's cellphone."

In cases where the relationship survived, some of the targets brushed the snooping aside — or even blamed themselves. "In such cases, the victim explained away the snooping by considering it as a sign that they should reassure their romantic partner about their commitment to the relationship," Beschastnikh said. "They ended up excusing the behaviour and, in some cases, continued to give the other person access to their phone."

The study also revealed four common motivations for using someone else's phone without permission: to control their target's relationships with other people, to prank them, for convenience's sake, or for personal gain (to steal money or contacts, for instance). Alarmingly, about two thirds of the incidents the researchers analysed concerned control, and in some cases the snooper's actions reflected abuse.

The main takeaway? Combing through someone's phone is not something to be taken lightly — as the study authors concluded, "The experiences we attempt to understand are 'mundane,' but they are significant and sometimes life-changing to those involved." Phones, with all the conversations and memories and contacts they contain, "can be understood as extensions of self," the authors wrote. Tempted to snoop on someone else's phone, or unsure how to process someone else's snooping? Don't dismiss the major violation that represents.

More like this
Are Sagittarius & Sagittarius A Good Match? Astrologers Weigh In
By Kristine Fellizar
How Does The Hinge Algorithm Work? An Insider Explains
By Lexi Inks
Chris Moyles’ Partner Supports Him In The Sweetest Way
By Darshita Goyal
Hinge's New Feature Makes It Easier To Explore Non-Monogamy
By Lexi Inks
Get The Very Best Of Bustle/UK