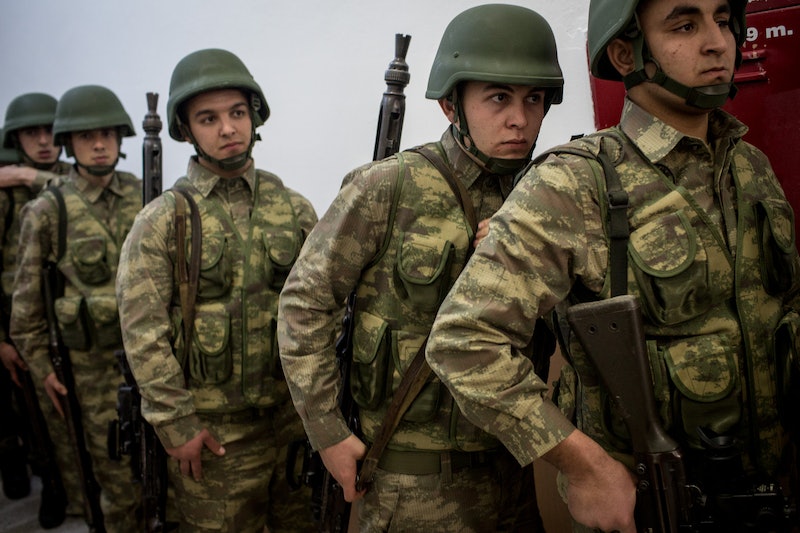 WWI and WWII still haunt the countries that fought them, and understandably so — both wars have in common an unfathomable level of human destruction. But the motivating factors for each war were different, and there's a reason many are revisiting WWI today, after President Trump ordered airstrikes on a Syrian airbase. The catalyst for WWI was the June 1914 assassination of Archduke Franz Ferdinand, an event that in other circumstances might have been a historical footnote of politically motivated aggression. Instead, Europe found itself at war one month later, a surprising turn of events few anticipated. Could something similar happen now?

To answer this, it's imperative to understand the players involved in Syria. The civil war between President Bashar al-Assad and various rebel forces has been going on since 2010. Russia and Iran have sided with Assad, with Russia providing financial backing and military intelligence, equipment, and personnel to prop up Assad and help him remain in power. Iranian forces are also fighting alongside the Syrian military, and have been since the beginning of the war. Russia and Iran are thus invested in very real terms in Assad retaining control of the country.

In a wholly separate endeavor, the United States has been working with a cohort of partners to beat back ISIS in Iraq and parts of Syria. The coalition includes 62 countries currently contributing in some capacity with the U.S. military in this mission to decimate the terrorist group. Because Assad is also opposed to ISIS — they threaten his control of Syria as much as any other group — the United States has been free to carry out their anti-ISIS strategy.

The decision by Trump to strike Syria's airbase takes the United States out of a strictly ISIS fight and into the civil war itself. This poses the risk of a proxy war, though it's very hard to predict the likelihood of that outcome.

For starters, the U.S. military gave Russia warning ahead of the airstrikes. That seems like an intentional move to minimize the possibility of escalation. At the same time, Vladimir Putin depends on projecting a tough guy persona in order to legitimate his leadership. If America attacks Russia's ally, it would seem to require some kind of response. And in fact, Russia has pulled out of an agreement with the United States to coordinate aircraft operations over Syrian air space.

It's also worth considering how little Assad has to lose at this point. He has ripped apart his own country, and even if he does somehow hold onto power, there's no chance that Syria looks the same when the fighting finally ends. Millions of his people have fled to Turkey, Lebanon, Jordan, Iraq, Egypt, and all throughout Europe.

Putin is another story, but recognize that the Russian leader has been more or less an enigma to three administrations now. He's not easy to predict, and he's also shown a startling willingness to sacrifice the economic reality of Russian people in the name of political gain. It's also important to keep in mind that the Russian government and governing structure are not similar to ours. As delineated in The Economist, Putin and "the Russian state acquired religious attributes," making their mission to reassert power and prominence on the global stage a "calling." A big part of that is reducing U.S. influence. As Putin himself conceives of it, America "wants to freeze the order established after the Soviet collapse and remain an absolute leader, thinking it can do whatever it likes, while others can do only what is in that leader's interests."

Still, while there may be animosity between Russia and the United States, it remains unlikely, in this writer's opinion, that a broader conflict will ensue. Unless Russia has been plotting to engage in a large-scale war and has simply been waiting for an excuse, the bombing of an ally's airfield — an ally that just unleashed a chemical weapon on civilians — is hardly a reason for all-out war.

It's also important to remember what both President Obama and Trump have argued about chemical warfare: if there is no retaliation, the use of such heinous weapons will become normalized. That's the inherent risk of inaction, and arguably just as frightening a possibility.