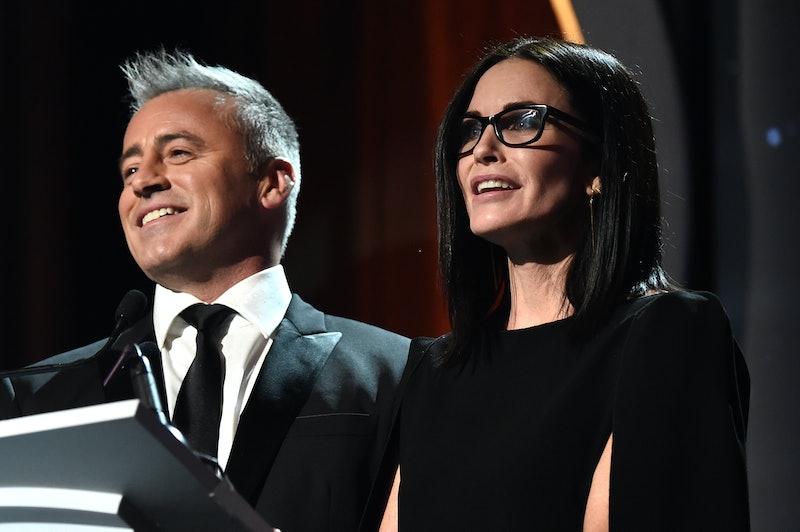 It's been over 25 years since the show first aired, but on Saturday, Oct. 5, Matt LeBlanc joined Jennifer Aniston and Courteney Cox for a rare Friends reunion. Cox posted a selfie with her former costars on Instagram, and though the women of Friends remain close, their male cast mates, including LeBlanc, Matthew Perry, and David Schwimmer, don't seem to get together as much. Cox noted how special the gathering was on Instagram, captioning her post: "A rare night and I love it."

The actor, who starred as Monica Geller on the popular series, often posts nostalgic memories from the show on social media. On Sept. 19, Cox shared a throwback Friends cast photo on Instagram in honor of the show's anniversary, writing, "Celebrating a Thursday night 25 years ago. Thank you to all of our loyal fans across the world. You’ve certainly been there for us! I love these guys!"

The Friends series finale aired in 2004, as per IMDB, and in the years since the series wrapped, Aniston, who starred as Rachel Green, and Lisa Kudrow, who played Phoebe Buffay, stayed friends. In June, Cox posted a birthday selfie with Aniston and Kudrow, writing, "How lucky am I to celebrate my birthday with these two??? I love you girls. So much."

LeBlanc, who played Joey, doesn't seem to spend as much time with his former cast mates. The Man with a Plan actor previously revealed he's opposed a Friends reboot. In March of 2018, LeBlanc said he wouldn't ever revisit Friends, according to Cosmopolitan. He said: "To go back and revisit all these years later, well I don’t know what the story would be now. They would all have moved on from that period so it just wouldn’t be the same. Put bluntly, I don’t think anybody wants to see an old Joey having a colonoscopy."

In 2017, Perry also said he wouldn't join a Friends reunion in an interview with Variety. "When I’m asleep, I have this nightmare that we do “Friends” again and nobody cares," he said. "We do a whole series, we come back, and nobody cares about it. So if anybody asks me, I’m gonna say no. The thing is: We ended on such a high. We can’t beat it."

During an appearance on The Late Late Show with James Corden in December of 2018, Aniston supported a Friends revival, but confirmed Schwimmer, LeBlanc, and Perry were not on board. "The girls always said we would love to do it again," Aniston said. "The boys are a little bit less excited about it for some reason."

The Friends' 25th anniversary seemed to have the whole cast missing the show, so it's possible a formal reunion might not be completely out of the question. On Sept. 19, LeBlanc posted a throwback Friends cast photo on Instagram, writing, "Celebrating a Thursday night 25 years ago. Seems like yesterday. Thanks to all the fans for watching." Schwimmer also posted the photo on Instagram, writing, "THANK YOU to all the fans out there!! We couldn't have done it without you."

It's not yet clear if LeBlanc's reunion with Cox and Aniston was a chance for old friends to reconnect, or a hint that the Friends cast are gearing up for a more formal reunion.