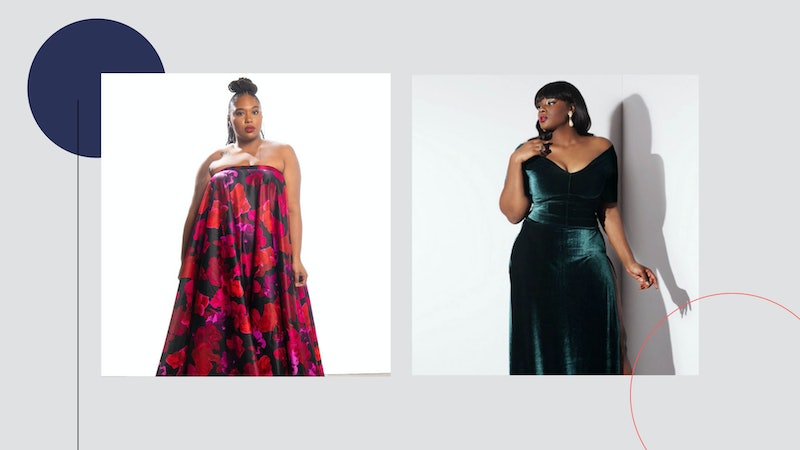 For most people, landing a Good Morning America appearance would be a career highlight. For fashion designer Courtney Smith, it was only the beginning.

“The fanfare around that was great,” Smith tells Bustle. “It really went crazy. At that point, there was no way I could do the orders myself.”

Until her segment on national television, Smith had been designing and sewing custom plus-size garments mostly for friends and people who found her via social media.

“I made some clothes for a friend who was doing a photoshoot,” she explains. “I put them on my Instagram page for shits and giggles. Girls were in my DMs and comments like, ‘Where can I get one, what size?’ And I thought, ‘Oh snap, they really like this. Let’s see if we can make something happen.’”

That 'something' ultimately became her full-fledged brand, Courtney Noelle, which has taken her from GMA to red carpets (Lizzo and Gabourey Sidibe are fans) to magazine editorials, including a credit in the February 2016 issue of Essence.

“That was definitely a significant moment for me professionally,” Smith shares. “Essence, Ebony — and then my grandmother used to have Jet magazine — those were where I saw beauty and fashion [growing up]. I was like, ‘Oh my God, there’s my name.'"

But her climb to success didn't happen instantaneously. After graduating college in 2011, the Bronx-born entrepreneur thought she might enter the fashion industry by working at a magazine. That all changed after she interned for an independent designer.

“I was like, ‘No, this is what I want to do,’” she says. “Let me not be afraid of what I really want to do. I stayed with them for three years, then I quit and started Courtney Noelle.”

Every young business owner knows the early years are usually the toughest. For Smith, there was no shortage of challenges in getting her brand off the ground. For starters, she was a one-woman show who handled each and every task, no matter how small.

While she remains her company’s sole full-time employee, her professional successes so far have enabled her to bring on part-time help. Her brand continues to flourish among the red carpet set who come to her for her bold, glamorous aesthetic.

“I like to say that I make all obnoxious clothing,” she says. “It’s very loud, it’s very in your face, but also it’s cute. It’s not loud for the sake of being loud.”

That approach is intentional. As a plus-size designer, Smith is all too aware of the boxes the industry tries to put plus-size people into.

More like this
Instagram & Facebook May Finally Lift Their Notorious Nudity Ban
By Allie Fasanella
All Of Doja Cat’s Wildest Paris Couture Week Looks
By Dominique Norman
Looking Back At Kylie Jenner's Best Fashion Week Looks
By Allie Fasanella
30 Of Kendall Jenner’s Best Runway Looks To Date
By Dominique Norman
Get Even More From Bustle — Sign Up For The Newsletter
From hair trends to relationship advice, our daily newsletter has everything you need to sound like a person who’s on TikTok, even if you aren’t.