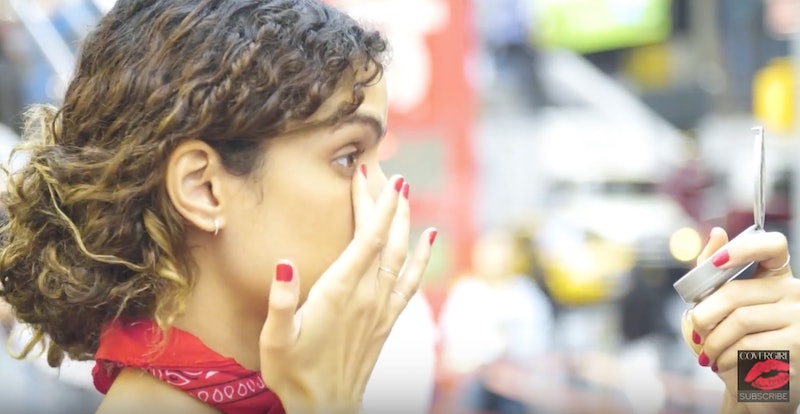 A subway ad discouraging people from applying makeup in public lead drugstore behemoth COVERGIRL to launch its new #ProjectPDA campaign, where the brand encourages makeupistas to primp in public and to engage in public displays of application. Because why the heck not?

In a less-than-two-minute video (which was first revealed at the 2017 WWD Beauty Summit in NYC) this question is posed: What's wrong with applying makeup in public?

The brand surveyed 1500 woman around the country and more than half admitted they were not comfortable doing their makeup in public. Additionally, 52 percent felt judged at work for their makeup. Also, 74 percent said they believe they need to wear makeup in social settings, while 75 percent proclaimed they wear makeup for themselves and not for others.

The reasons those surveyed felt uneasy about applying makeup in public settings are thus: Because people react as though the applier is vain, they give you side eye, and are basically telling you what not to do.

I personally don't get why whipping out a gloss or an eyeshadow palette and doing a quick touch up or total face on the subway is an issue. People do far worse on the public transit, like eat or clip their toenails, the latter of which is unacceptable, IMO. As long as you're not elbowing someone else seated beside you or spilling product on them, it's all good.

Essentially, the campaign reminds us that no one should make you feel bad for doing your makeup.

As part of the study and to encourage people to be proud of wearing makeup, COVERGIRL placed mirrors and vanity stations outdoors in NYC so people could apply without shame. Makeup is akin to artistic self-expression and extension of who the wearer is.

Overall, this campaign is designed to challenge the notion that people have to apologize or hide their makeup choices. It seeks to destigmatize makeup application in public.

The empowerment video features loud and proud makeup obsessives like Patrick Starrr, Laura Lee, It's My Raye Raye, and Thania's Beauty, all of which share their makeup-in-public experiences.

COVERGIRL's #ProjectPDA reminds makeup lovers that it's OK to do you and to be proud of this expressive technique.

The video of the study is super revealing and will remind you that there should be no shame in your makeup game.