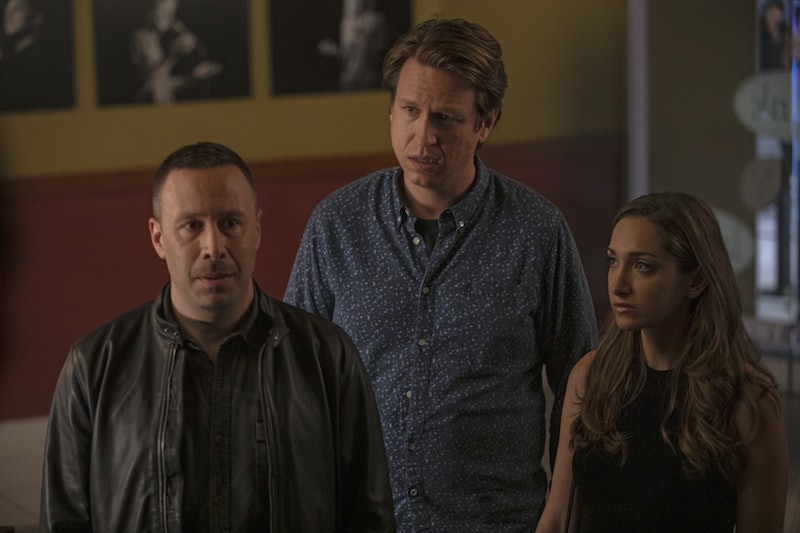 Over the last year, there's been much made of the male toxicity of stand-up comedy, but perhaps no show has captured it as candidly as HBO's Crashing. In a Season 3 scene, a disgruntled male comic harasses a waitress before his performance, offering her shots until she desperately begs him to leave her alone. That same night, he gets onstage and jokes about how unreasonable asking for consent is during sex, bombs, and then proceeds to complain about political correctness. He repeats a tired sentiment: that the industry is worse off now that he's not able to behave this way without consequence. It may seem obvious that he's over the line, but clearly, these sort of incidents are still an issue — and that's why Crashing writer and star Jamie Lee says it's so important to include them on the show.

"I think we always feel a bit of a responsibility to expose the sort of 'behind closed doors' conversations being had, and also showcase what insecurity can do to people who are sort of in a creative profession that can't help but be slightly ego-driven," she tells Bustle ahead of the Feb. 24 episode, which she co-wrote. "I kind of like those cracks in the molding moments that we've shown this season, because ... it really showcases like, 'Hey guys, this actually is what you're saying, and look at how ridiculous he sounds. Take responsibility here.'"

Lee's character, Ali, also a stand-up comic, masterfully tears down the aforementioned comedian's bitter point of view — an aspect of her job she says can feel "healing and cathartic" after enduring similarly uncomfortable situations herself.

And though the show serves as a semi-autobiographical project for star Pete Holmes, it's not the only time Lee has been able to channel her own experiences into the script. "I'm always fighting for like, 'let's also get the female perspective on this situation as much as possible,'" she says. Case in point: when writing Sunday night's episode, which features Ali's daunting first performance on Late Night with Seth Meyers, Lee says she had her own late night debut in mind. "The first time I did Conan, I was so nervous that when it was over, I started crying because I was so happy it was over," she says. "So then when I watched it on TV that night, ... I was like, 'I don’t even want to revisit the way I felt today when I recorded that.' And I think that’s Ali’s situation in this episode."

As Ali's friends gather to support her when the set airs on TV, the arrival of her ex-boyfriend Pete and his new girlfriend, Kat (Madeline Wise), adds more complications to her night. Kat's insecurities surrounding Pete and Ali's history hit a boiling point as the evening progresses, and the subsequent fight she picks with Pete showcases another strong point of Crashing: its characters are flawed and charmingly human, and even in their worst moments, you can't help but sympathize with them.

"For Kat, she's already kinda feeling insecure in [she and Pete's] relationship, and then she's also supposed to like, be Ali's cheerleader. It's like, that's Pete's ex-girlfriend! That's an uncomfortable spot for her to be in, and I feel like no one is really acknowledging that for her," Lee says. "And then it's also an uncomfortable situation for Ali, because it's really supposed to be her night. She's worked really hard to get to this place. She's secure in her relationship, so it's not really her job to make Pete's current girlfriend feel comfortable. It's like, nobody's really right or wrong."

Even when Kat starts to throw nastier punches than we've ever seen from her, Lee says the most important thing was that her reactions felt authentic. "Getting into that fight specifically… we just wanted it to feel real, and I think people are really ugly when they fight," Lee explains. "I think people say things they don't mean in fights, and Kat definitely goes really far in that fight and it's really uncomfortable for Pete. [But] there's a scene after that where Ali's like, 'I don't know, people say crazy sh*t when they get upset.'"

Whether holding up a mirror up to the dark corners of comedy or showing both sides of a messy argument, Crashing's willingness to broach hard subjects make it one of the most honest shows on TV. And Lee is no small part of that success.

More like this
Beyoncé & Madonna’s “Break My Soul” Remix Honors A Group Of Black Icons
By Stephanie Topacio Long
22 Movies On Netflix That Are Perfect For The Whole Family
By Bustle Editors
What’s New On Netflix: 'Never Have I Ever' & 'Indian Matchmaking' Return
By Arya Roshanian
'A League Of Their Own' Star Abbi Jacobson Is Engaged To Jodi Balfour
By Jake Viswanath
Get Even More From Bustle — Sign Up For The Newsletter