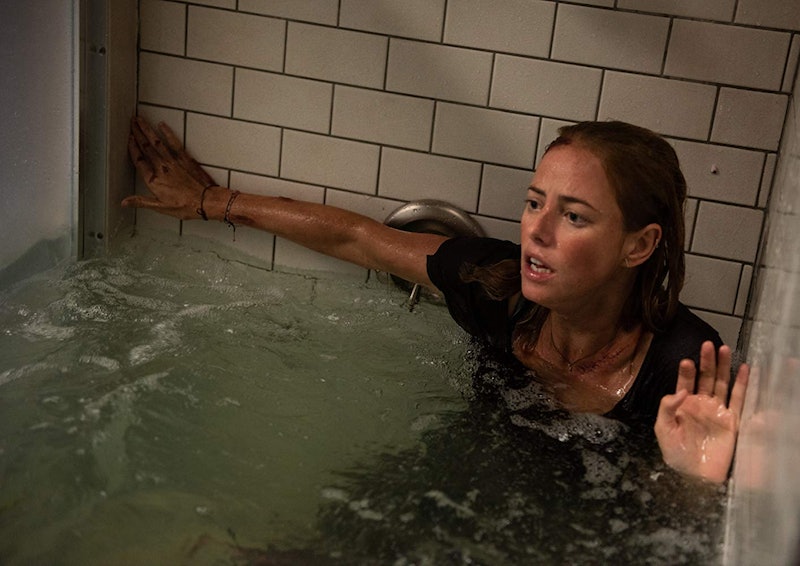 Starring in any action film has to be physically demanding of an actor. But Crawl star Kaya Scodelario may have the rest of her colleagues beat. In the July 12 release, she's on the run from aggressive, man-eating alligators in a middle of a Category 5 hurricane. So not only did she have to perform some intense stunts, but most of those stunts happened when she was fully submerged. Speaking over the phone the week of the film's release, Scodelario shares what what it's really like to shoot almost an entire film underwater — from some intense swim training to extremely gross set conditions.

"We built all the sets in tanks so that we could slowly flood them in real time for the movie," explains the actor. "So day one, there was water on the floor and everyone was splashing about. But then by the end of the shoot, we were physically having to swim to set every day — the entire crew."

That's because the film revolves around her character, headstrong varsity swimmer Haley, ignoring evacuation orders in order to search for her father (Barry Pepper) in the middle of a violent storm that's hit their small, swampy hometown in Florida. She finds him injured in the crawl space of their family home and then ends up trapped there as well, with some hungry alligators lurking nearby.

"We couldn't touch the ground," the actor says of filming in the tanks, adding that the cast and crew had to wear wetsuits as they worked. "Everyone was pruny from head-to-toe. God knows how many people were peeing in there. It was pretty gross by the end."

Just moving from one part of the set to another was challenge enough, but that's not all that was asked of the actor. In one particular scene, Haley, her dad, and their dog Sugar are able to find refuge on a small boat. But this doesn't last long as a huge wave wipes them out, flips the boat, and brings them back into the house.

"Even though we were in safe hands, and we had amazing marine guys [overseeing the stunts] and people there to look after us, that was kind of the most frightening thing. But it's one of my favorite sequences in the movie," Scodelario recalls.

But in order to even shoot the film in the first place, it wasn't enough that Scodelario had the acting chops. She also had to physically prepare herself for the role. "I went with a personal trainer for about a week, and we started from building muscle and getting strong and stamina," the actor says. "Then I trained in the pool for an hour a day for about six weeks leading up to the shoot." She also says that though her character in the story is a competitive swimmer, she previously wasn't very comfortable in water herself. "I started from the very basics of swimming with the little floaty devices for children, and then working up to being able to do laps on my own," the actor explains.

And while she didn't actually work with any real alligators, Scodelario did her best to study the creatures to make sure she depicted her character with authenticity. "I'm a Londoner, so I haven't really come across any gators in my time," she laughs. "I did a lot of research into their movements, and I wanted to know everything Haley would know being from there, and being in such close proximity to them. I also wanted to really research the bites, and how they affect people because there are quite a few attacks in the film, and I never wanted it to feel as though she should have broken then or been dead already."

Still, despite all the training and this newfound knowledge about alligators, Scodelario — who is also a self-described "coward" when it comes to horror films — doesn't think she'd survive in Haley's circumstances.

"I think the first thing I would have done is just sit in the corner and cried and wait to die," she jokes. "I wouldn't have been very useful at all." "But," she continues, "I'd like to think if it was someone I really loved and cared about, I'd do everything in my power to get us out of there."

Though the actor didn't come out of the movie as a survival expert, nor did she get over her fears about horror, Crawl was a great filmmaking first for her. "I've always loved the movies and cinematic experience, and the intensity," she says. "Being with a group of people, be it a comedy, or something really sad, or something scary, there's something amazing about sharing that experience with everyone. And now that I've done [Crawl], I really get why people love the adrenaline rush of it."