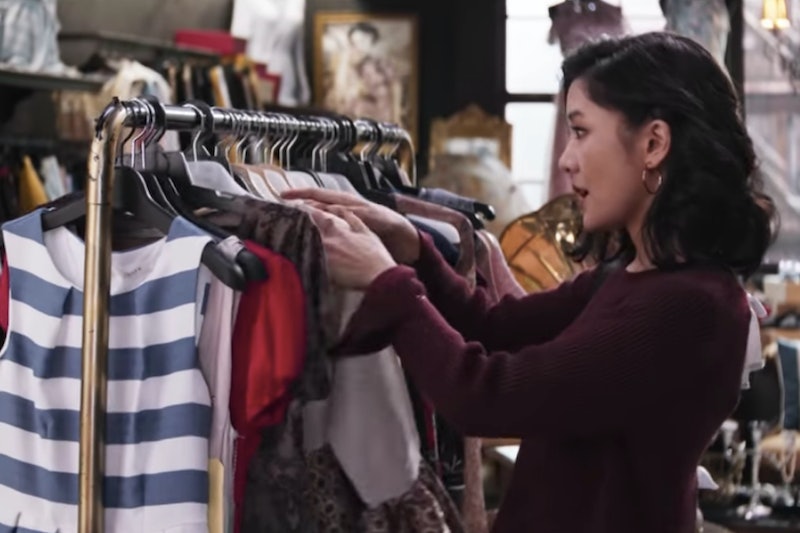 It’s getting to be that time of year when you need to start thinking about your Halloween costume. Coming up with something new year after year is pretty tough, and many of us turn to pop culture to find our Halloween costumes. This past year was a big one for pop culture; there are tons of options from the new Marvel or DC releases, not to mention the many Netflix Originals that filled your queue (GLOW group costume, anyone?). But please rethink that Crazy Rich Asians Halloween costume if it was on your list of ideas. Some of the more recognizable looks from the movie are absolutely stunning, offering Asian people — yes, Asian people — an amazing opportunity to celebrate authentic Asian characters for the first time in a super long time. That's because the history of yellowface in Hollywood has been so pervasive and so damaging, that Asian people have not seen this kind of representation in a film in, like, forever. So if you're not Asian, a Halloween costume from this film can run the risk of looking culturally appropriative, or even racist.

If you haven’t seen it yet, Crazy Rich Asians, based on the best-selling 2013 novel of the same name, tells the story of Rachel Chu (Constance Wu) and her boyfriend Nick Young (Henry Golding) and their trip to Singapore for Nick’s best friend’s wedding. Only, Nick failed to tell Rachel that he comes from one of Singapore’s richest families — like, “woah, this family is rich!” rich. Upon arriving in Singapore, Rachel is basically shunned by Nick’s mom (Michelle Yeoh) who doesn’t approve of Nick’s choice for a partner, and bullied by Nick’s jealous female socialite friends. Much rom-com action ensues, and I won’t spoil the rest for anyone who hasn’t seen it. Let’s just say I cried for, like, the last quarter of the movie.

It's understandable if you're tempted to dress as someone from the Crazy Rich Asians crew. There are so many memorable characters who snag your heart throughout the film, and easy ways to recreate their looks. The dog-print pajama set Rachel's college bestie, Peik Lin Goh (Awkwafina), wears when they're reunited in Singapore? Iconic. Most of the characters dress in Western clothing throughout the entire movie, so, for example, a Rachel and Nick couple’s costume could be as simple as a tuxedo and a blue tulle ballgown. But add anything to these costumes to "look Asian," such as black wigs, makeup that darkens the skin, or eyeliner to shape the eyes, turns the costume from a fun homage to a popular film, to an example of yellowface.

When you look at the history of how Asian people have been depicted in the media, it's easier to see why this is such an issue. Hollywood has a history of using yellowface to portray Asian people instead of casting actual Asian actors, according to the Consortium of Asian American Theater and Artists. And oftentimes, Hollywood depicted Asian people as caricatures, dehumanizing them to Western audiences, says the Media Action Network for Asian Americans (MANAA). According to The Telegraph, one of the most infamous instances is Mickey Rooney's portrayal of Mr. Yunioshi in Breakfast at Tiffany's. Rooney's character was dressed to look like the cartoon caricatures of Japanese people during World War II, says MANAA, complete with buck teeth, taped eyes, and a fake accent.

You don't typically see Rooney's version of yellowface these days, but yellowface is still very much alive and well in film and television — just in a much more subtle form. According to Teen Vogue, today you see it through whitewashing, when a white actor takes on a role intended for a non-white character. Think of the public criticism when Emma Stone was cast as part-Hawaiian woman Allison Ng in Aloha, or when Scarlett Johansson was brought on to play a Japanese woman, Major, aka Motoko Kusanagi, in Ghost In The Shell. Even if these roles aren't intended to dehumanize or stereotype the characters they play, as Forbes argued in the case of Netflix's Altered Carbon, these roles can be most appropriately portrayed by people who share the same background as the character.

Furthermore, a movie like Crazy Rich Asians was such an incredible moment precisely because it stood in marked defiance to Hollywood's history of yellowface and whitewashing. To see a movie like Crazy Rich Asians in which Asian actors are in leading roles that aren't caricatures or stereotypes — that's just so utterly amazing. (So amazing that the film was the most successful rom-com in the country in nine years, according to CBS, showing studios, as Black Panther did in February, that you don't need a white actor to lead the film in order for it to be a commercial success.)

To engage in any kind of yellowface is disrespectful at any time of year, but to do so in connection with a film that's so meaningful to so many, and during Halloween to boot, is just a continuation of the history of racism Asians have faced for a very, very long time. Your safest bet? Think long and hard about whether you really need to do a Crazy Rich Asians costume this year.