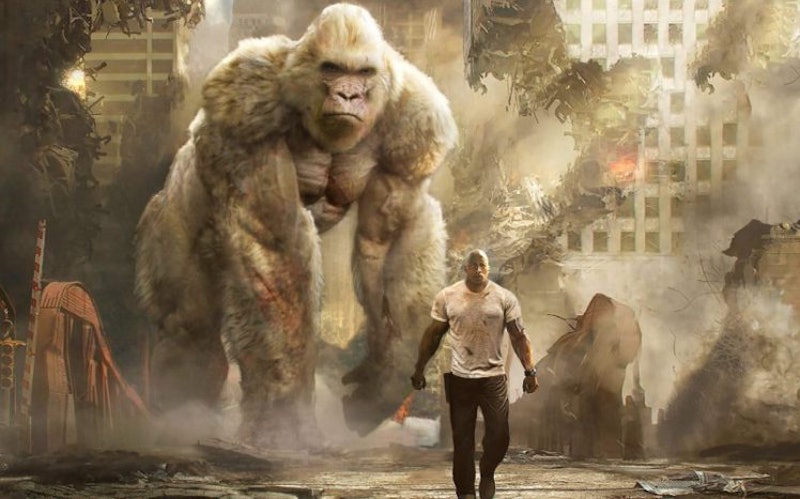 Though based on an '80s arcade game, the new action movie Rampage features some high-tech science that's anything but retro. A title card at the start announces that powerful gene-editing tool CRISPR was banned by the U.S. government in 2016, and the opening scene immediately shows why. Orbiting in space away from pesky rules, evil company Energyne's research lab has succeeded all too well at their experiment; it's now running amok and destroying the station. Samples of the new drug fall back to Earth and similar to the OG game, mutate three animals into rampaging beasts. But is CRISPR from Rampage real, and if so, could it actually create monsters somehow?

The scientific breakthrough is indeed very real, and is at the cutting edge of research — but don't worry, monsters aren't coming. Short for "clusters of regularly interspaced short palindromic repeats," CRISPR proper is a stretch of DNA sequences used by bacteria as part of their defense mechanism. It's the basis for the technology, officially known as CRISPR/Cas9 (and often shortened to just CRISPR, causing a little bit of confusion) that allows the changing and reseqencing of DNA with a precision previously unheard of. Science magazine hailed it as their "Breakthrough Of The Year" in 2015.

In Rampage, Naomie Harris plays Dr. Kate Caldwell, a scientist who worked for Energyne trying to find a cure for cancer. The company turned her research into a super-weapon, utilizing snippets of DNA from various creatures not to help heal humans or improve their abilities, but to build the ultimate supercreature. Real CRISPR researchers are far from cobbling together bits from different species, and they even reject the idea of tweaking human DNA. Their focus at the moment is solely to "correct" deficiencies, like snipping out the gene known to cause a heart deficiency that can lead to sudden cardiac arrest, according to Business Insider.

And despite Rampage's claims, CRISPR hasn't been banned by the U.S. government. In fact, in 2015, U.S. company Ovascience announced they would continue ongoing research to apply CRISPR to specifically human embryos. National Academics reports that at a 2015 International Summit on Human Gene Editing, it was agreed by all participating countries to allow and continue research under legal and ethical guidelines, and created an international forum to determine what those guidelines will be.

There are plenty of ethical concerns surrounding DNA altering, and a number of articles have voiced concern about creating super-humans or "designer babies." However, the potential benefits of CRISPR research, including engineering foods that would support the world's increasing population using less energy and resources, would make a total ban as bad as complete deregulation in many people's eyes.

That doesn't mean the government isn't keeping an eye out, though. Unlike Rampage's inefficient FBI and Army, completely unaware of Energyne's research until it's tearing through cities, the actual FBI and Pentagon are keping tabs on CRISPR. in 2015, a special agent from the FBI’s Weapons of Mass Destruction Directorates spoke to a panel in Washington to brief the group about the potential dangers of CRISPR. They came to the same conclusion, that the potential dangers had to be carefully balanced with the immense amount of good that could come from research, NAP reports.

Right now the technology is nowhere near the level the movie portrays. The closest thing to a Rampage-style situation in real life would be if CRISPR technology were used to alter DNA in such a way that any changes would pass on to offspring, what in DNA research is called a "gene drive" technique that rapidly spreads the change throughout a population. That's still miles from Rampage's instant-transformation gas, where the chemical goes immediately to work adapting and changing the genetic material of the creatures who breathe it in. While CRISPR would indeed affect the individual creature whose DNA is being tweaked, the current technology would take generations to see a larger effect.

In fact, that's happening as we speak; a research lab in California has created a zoo of mutant mosquitos, hoping to tweak the insect's ability to spread devastating diseases like Zika into oblivion. As molecular biologist Omar Akbari told Stat News, "“I really think it’s solvable. It’s not cancer. It’s not Alzheimer’s. It’s literally a mosquito biting you. We can stop that.”

They're careful to research the long-term effect on the ecosystem and world should they release the mosquitos into the wild. There's still possible unforeseen pitfalls, but it's nowhere near the towering monsters Rampage suggests is possible.

More like this
The 'Spiderhead' Movie Ending Is Nothing Like The Short Story It’s Based On
By Morgan Leigh Davies
How To Stream 'Jurassic World: Dominion'
By Morgan Leigh Davies
Everything To Know About Netflix's Marilyn Monroe Movie 'Blonde' Starring Ana De Armas
By Grace Wehniainen
Everything To Know About 'The Hunger Games' Prequel Movie
By Grace Wehniainen and Radhika Menon
Get Even More From Bustle — Sign Up For The Newsletter