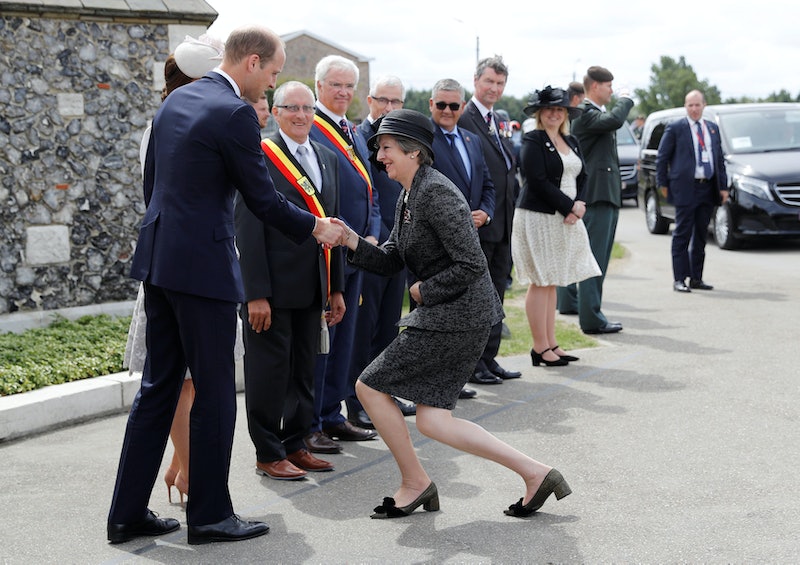 For once the Prime Minister is in the news about something other than Brexit. Yes, everyone is talking about Theresa May's awkward curtsy to Prince William. Yay, right? Something a bit lighthearted to take your mind off the fact that everything sucks and we still don't know what's going on with our exit from the EU. Well sorry everyone. I'm not a Theresa May fan but when I saw people mocking her uncomfortable-looking curtsy, I didn't smile, I just felt a bit sad.

I have a rib rack's worth of bones to pick with TM, but her awkwardness isn't one of them. Why? Well because May's ungainlyness and bad posture kind of reminds me of me. I couldn't be further away from her on the political spectrum but she's 5"8 and I'm 5"11 and trust me, if I had to curtsy, I'm almost certain it would look a whole lot more than Theresa May's offerings than Meghan Markle's.

The criticism around her inability to seem completely at ease in social settings sends out a message to me which seems unhelpful, that social awkwardness has no place in politics. Obviously it's common sense that a leader whose job involves meeting lots of people would benefit from being a bit more comfortable around them, and we know how being confident and charismatic helps — Barack Obama and Justin Trudeau are great examples of this. But I still don't think awkwardness or ungainliness should hold anyone back from anything. I want politics to reflect society at large and that means everyone from the super-charismatic to the socially awkward.

The problem is, we know British politics is a very unwelcoming place for the socially unskilled. What about Ed Miliband, whose inability to eat a bacon sandwich was one of the many nails in the coffin of his bid to become PM back in 2014? Sometimes this sort of awkwardness is is cited as evidence that politicians are totally removed from normal people's lives. And in many ways they are. But to my mind social awkwardness and the inability to eat a bacon sandwich actually makes these people seem a bit more human. Maybe it's just me, but I'm forever getting food on my face, spilling it down my jumper, knocking drinks over, or stumbling over my own feet.

But here's the thing. I do my best not to let my awkwardness hold me back. I often trip over my words when just chatting to people, but I've never had a problem with public speaking. I've been known to lose balance and fall over apropos of nothing, but I wouldn't let that stop me say meeting the Queen.

Do we really want to send out the message that not being able to pull off the perfect curtsy somehow makes Theresa May unfit to be leader of the country? Because newsflash, that's hardly the worst thing she's done recently. I honestly saw more criticism for the curtsy than I did of her feeble criticism of Trump's disgusting policy of separating children from their families at the Mexican border or her decision to still allow his visit to the UK.

And yes you can criticise both Theresa May's awkwardness and her politics if you really want, but make sure you actually are doing both. Because mocking someone's social awkwardness instead of their policies isn't subversion it's distraction. And as recent events over in the US prove, while you're busy laughing at the way someone looks, they may well be enacting policies you find abhorrent. And if that isn't a reason to focus on someone's actions rather than awkwardness, I don't know what is.