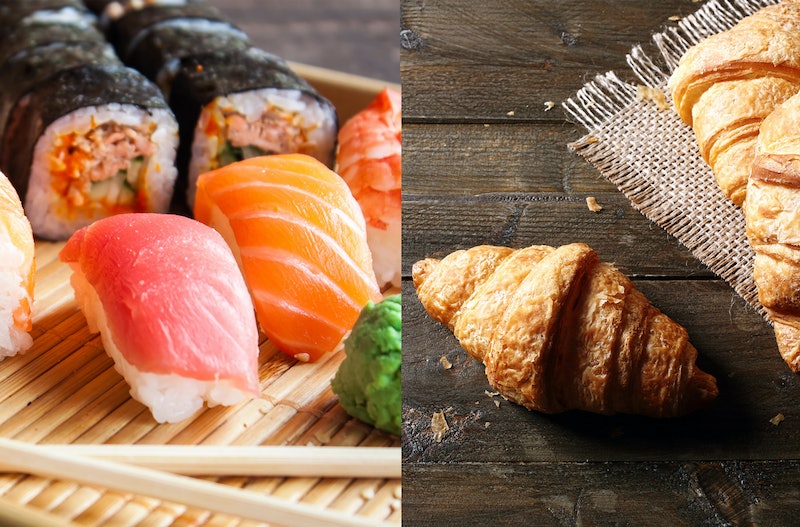 Sometimes, triumphant love stories are sparked in the pantry. Think: The classic romance of peanut butter and jelly; the timeless love between milk and cereal. Beautiful, beautiful stuff. There's nothing foodies love more than when a modern love story prevails, like the one between croissants and muffins ("cruffins") or sushi and burritos ("sushi burritos"). But one modern food love story I never expected to be reporting on is crossushi, a cross between croissants and sushi — especially not with the angle that it may be the first big food trend of 2018. Is it just me, or does the idea of "crossushi" seem more Frankenstein than Casablanca?

Some of our favorite foods deserve to remain independent. This isn't The Bachelor. Croissants do not need to date 29 other "eligible" edible items to find their perfect match. A croissant is a pastry that stands strong alone, or as a chocolate, ham, or almond variety. It also isn't terrible when converged with a donut — as hoards of people lined outside Dominique Ansel Bakery in NYC awaiting a "cronut" every day have proven. But to morph it with sushi, another strong, independent menu item that doesn't need French pastry influence to win over our tastebuds is ... puzzling.

Understandably, it has Twitter a little skeptical. While some users seem to think that this food love story should remain fantasy, others suppose there's no harm in giving something strange a shot every now and then.

No, no, April Fool's Day has not been rescheduled for January. Whether it's love at first glance or not, the "crossushi" is real, and it may be 2018's next big food thang. Its existence is all thanks to Mr. Holmes Bakehouse, which is located in Los Angeles, San Francisco and Seoul, South Korea. The bakehouse isn't new to the pastry fusion trend: Their puffy "cruffin," the results of a croissant and muffin affair, is featured in at least 32,560 public Instagram posts. Flavors rotate per season for this photogenic pastry. But the cruffin can expect to make room in the pastry case for the "California Croissant".

Savory croissants have been around for a while. There's nothing more delectable or indulgent than a buttery croissant stuffed with ham and cheese. But some people are purists, if you couldn't tell by Twitter's reaction. The "California Croissant" or "crossushi," is "a croissant topped with sesame seeds and filled with smoked salmon, wasabi, pickled ginger, and nori seaweed. Kikkoman soy sauce is served on the side," as reported by INSIDER.

Some Instagram users are 'shipping this new union. One Instagram user comments on a picture of the croissant, "All my favorite foods in one at last!" Other's refer to it as "unique."

Full disclosure, in case you couldn't already tell, I am one of those croissant purists. I prefer to stick to a non-stuffed pastry — unless chocolate is involved — that showers flakes, not salmon, onto my lap. But, the "crossushi" was not created for me. It was created for adventurous eaters who care more for creativity and possibilities of what can be.

And, regardless of its recent exposure to the Twittesphere and the consequential spike in haters, it exists. And has existed for some time. I might not be ordering one anytime soon (but that's because I don't live near a location), but, it's always worth a shot. You never know, it could be love at first bite. The "crossushi" is an experiment in how far our food match making can go. It seems that this little spark of culinary fusion has already made a loving home and plans on going the distance. You can choose to take your croissant with soy sauce or not in 2018. Either way, we'll all be living happily ever after.