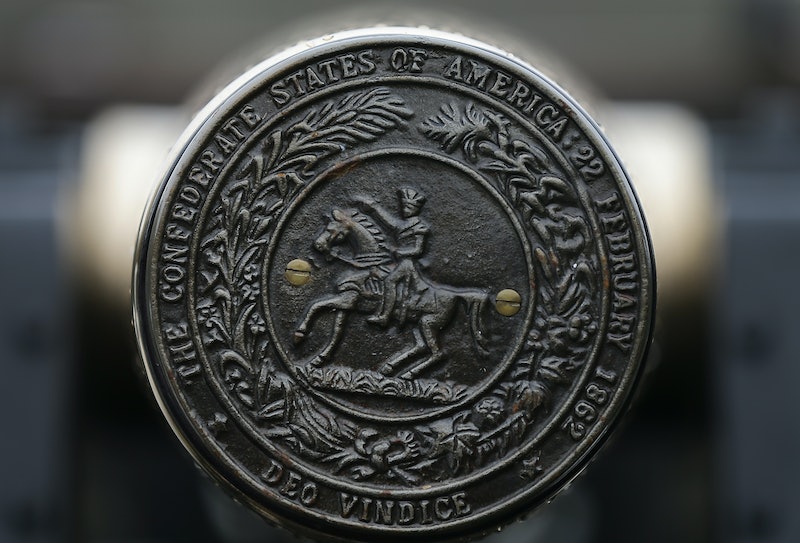 Robert E. Lee probably isn't the historical figure most often associated with the college town of Charlottesville, Virginia, but on Saturday night, a statue of the Confederate general became the epicenter of protest. Protestors gathered in Charlottesville's Lee Park with torches, surrounding the statue, seemingly in an effort to prevent the statue's removal. In addition to torches, the protestors seemed to carry with them a tone of white supremacy.

According to The Daily Progress, the local newspaper, a crowd of "several dozen torch-wielding protestors" gathered in park around 9 p.m. on Saturday. The gathering only lasted about 10 minutes, as Charlottesville police officers arrived quickly in response to an altercation, reportedly between the protestors. With officers on the scene, the crowd quickly dispersed.

In that short time, though, the crowd seemed to make their message clear. Surrounding the Confederate statue, they reportedly chanted, "You will not replace us," "Blood and soil," and, "Russia is our friend." Videos and tweets from the park show the torches and broadcast the chanting. Richard Spencer, a leader of the alt-right movement (and a graduate of the nearby University of Virginia), tweeted from the event, sharing a photo of himself holding a tiki torch with a live flame.

It was not clear if Spencer addressed Saturday's crowd, but at a previous rally in Charlottesville, he reportedly proclaimed, "What brings us together is that we are white, we are a people, we will not be replaced," according to The Washington Post.

Charlottesville Mayor Mike Signer said in a statement that the demonstration was "either profoundly ignorant or was designed to instill fear in our minority populations in a way that hearkens back to the days of the KKK. Either way, as mayor of this city, I want everyone to know this: we reject this intimidation. We are a welcoming city, but such intolerance is not welcome here."

According to The Daily Progress, The chairman of the Charlottesville Republican Party, Erich Reimer, agreed, saying, "Whoever these people were, the intolerance and hatred they seek to promote is utterly disgusting and disturbing beyond words."

The Lee statue in Charlottesville has been controversial for months. In February, the city council voted to relocate the statue to a different park. Then, earlier in May, a judge issued an injunction to temporarily halt the statue's removal. The next court hearing will reportedly take place in June.

Lee Park is located just over a mile from the University of Virginia (UVA) campus. The university is typically associated with Thomas Jefferson, who founded UVA after retiring from public service. Jefferson's own background, particularly his infamous slave ownership, has previously caused debate in the Charlottesville community. For instance, after last year's presidential election, several members of the UVA community criticized UVA President Teresa Sullivan for her use of a Jefferson quote in an email.

Surely, controversies rooted in the country's history are not unique to Charlottesville or UVA. Statues and depictions of Confederate leaders in many parts of the country have seen debate in recent years. In Charlottesville, however, the alt-right seems to have found a footing at the base of Lee's statue.