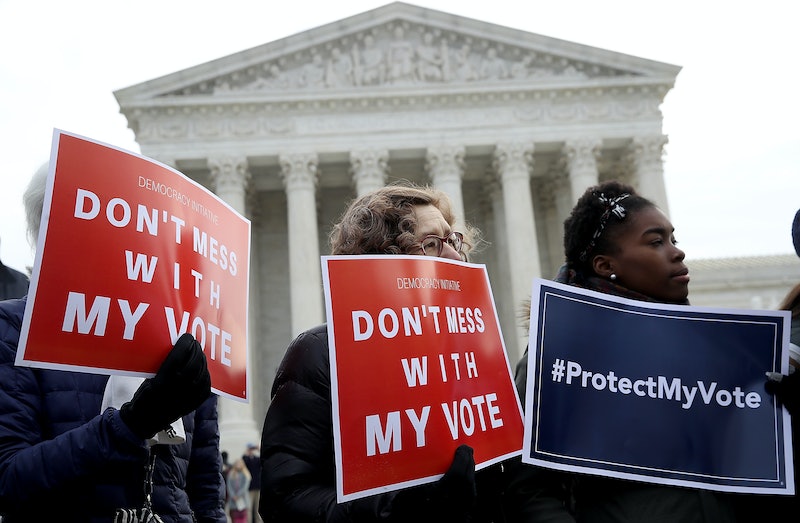 A case involving a Texas woman's 2016 vote during the presidential election witnessed a new — and perhaps promising — development on Friday, The HuffPost reported. Two major voting rights groups want to help Crystal Mason get a new trial after a verdict was initially handed down in 2018. The 44-year-old woman received nationwide attention after she was sentenced to five years in prison for voting illegally while on probation. Mason said she didn't know she wasn't allowed to cast a ballot at the time.

On Friday, the American Civil Liberties Union (ACLU) and the Texas Civil Rights Project said that they would appeal Mason's verdict, The HuffPost reported. The upcoming appeal will be framed as a voting rights and felony disenfranchisement issue. Mason will receive legal representation help from Dale Ho, who is the director of the ACLU's Voting Rights Project. Oral arguments for seeking a reversal of Mason's sentence are scheduled to start on June 4, according to The Root.

Three years ago, during a supervised release from prison for felony tax fraud, Mason voted in the 2016 presidential election. Mason said she unknowingly broke a state law prohibiting residents from casting a ballot unless they have fully served their sentence. In the Lone Star State's case, this covers parole, probation, and supervised releases like the one Mason was on.

As The Root reported, Mason continued to maintain that she did not receive enough counsel from the federal court, her supervisor, or even the election worker at the polling site to know that she was breaking Texas law. After the judge first announced the verdict for the case, Mason's attorney J. Warren St. John told NPR, "She was never told she couldn't vote. Not by a district judge. Not by anyone at the half-way house where she lived after she got out. Not by the probation officer." Both Mason and her attorney said it was an honest mistake on her part. The ACLU and the Texas Civil Rights Project also plan to highlight those points while appealing Mason's verdict, according to The Root.

Attorneys affiliated with the ACLU have denounced Mason's verdict as unnecessarily lengthy and reflective of racial inequality in America's criminal justice system. "The prosecution of Crystal Mason for the innocent mistake of casting a provision ballot that wasn’t even counted is a severe injustice," Andre Segura, who is an attorney with ACLU's Texas chapter, stated on Friday.

"Ms. Mason simply attempted to follow the law and participate in what she believed to be her civic duty, and in return has been sentenced to an outrageous length of time in prison," Segura added.

From the looks of it, Mason sounds optimistic about her future. "I am very excited to have the ACLU of Texas and the Texas Civil Rights Project joining me in my fight," she said in a statement on Friday, per HuffPost. "I am very grateful and I hope that justice will prevail here."