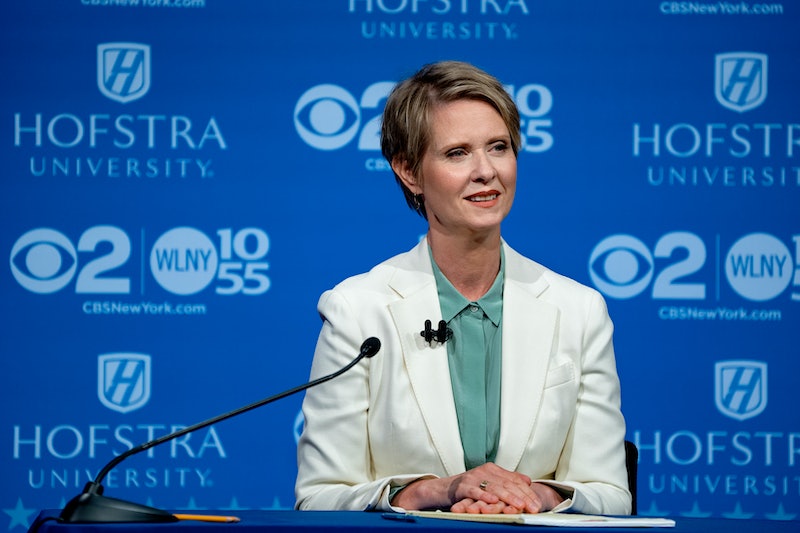 Former New York gubernatorial candidate and actor Cynthia Nixon criticized Vice President Mike Pence in a Saturday op-ed for The Washington Post. Nixon's op-ed was published a few days after former Vice President Joe Biden referred to Pence as a "decent guy," to which Nixon responded by listing Pence's record of anti-LGBTQ policies, both as governor of Indiana and as the vice president. Nixon wrote that she wanted to clearly outline why calling Pence a "decent" guy "is an affront to the real meaning of the word."

During a speech in Omaha, Nebraska, Biden described the awkward moment Pence endured while speaking at the Munich Security Conference in February when he brought up President Trump and was met with silence when he clearly expected applause from the room. "The fact of the matter is it was followed on by a guy who's a decent guy, our vice president, who stood before this group of allies and leaders and said, 'I'm here on behalf of President Trump,' and there was dead silence. Dead silence," Biden said in Omaha, according to CNN.

Shortly after Biden's speech, Nixon tweeted, ".@JoeBiden you’ve just called America’s most anti-LGBT elected leader 'a decent guy.' Please consider how this falls on the ears of our community. @DrBiden."

You’re right, Cynthia. I was making a point in a foreign policy context, that under normal circumstances a Vice President wouldn’t be given a silent reaction on the world stage. But there is nothing decent about being anti-LGBTQ rights, and that includes the Vice President.

Nixon responded once more, writing, "Thanks @JoeBiden. Appreciate the response. But please understand from where we sit, his dehumanizing of our community disqualifies @MikePence for the honorific of ‘decent’, regardless of the context."

Nixon went further in her Washington Post op-ed, saying Biden is "putting politeness over policy." She wrote that Pence's record speaks for itself in terms of decency: he notoriously signed Indiana's "religious freedom" bill, which the LGBTQ community said would've allowed business owners to refuse service to them if it violated their religious beliefs; and, according to Nixon, "he refused to lift a ban on needle exchange programs until a preventable HIV outbreak reached epidemic levels."

As vice president, Nixon wrote that Pence "played a leading role in the Trump administration’s efforts to ban transgender people from military service, and he serves in an administration that seeks to define transgender Americans out of existence by stripping federal recognition of their gender identity."

Nixon wrote that Pence's ability to remain "well-coiffed and calm" while making anti-LGBTQ statements doesn't make him decent, "it makes him insidious and dangerous." She wrote that Biden, for his part, may not understand the effects of normalizing Pence and his actions, according to the Post:

It’s easy to say nice things about Pence when you’re not personally threatened by his agenda. If Biden were being directly attacked in the same way that our community is, I think he would see Pence from a very different vantage point.

Nixon ended with a call to action, noting that for people whose rights are under attack, now is not a time for civility. She wrote, "If Democrats are too wedded to the collegiality of the Senate dining room to call out the Republicans who espouse homophobia, how are we ever going to stop them?"