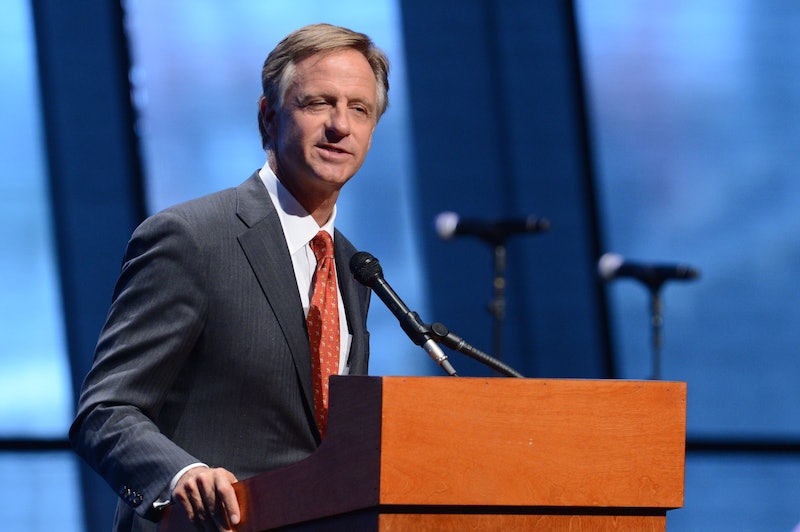 A woman's life sentence for killing a man who solicited her for sex when she was a minor is under review in Tennessee. Gov. Bill Haslam is considering Cyntoia Brown's clemency request, the state leader told the audience at a speaking event on Monday, according to Rolling Stone.

Just last week, Tennessee's Supreme Court ruled that Brown had to spend at least 51 years in prison before she could be eligible for early release. At this point, the ability to grant her clemency lies with the governor.

“We’re reviewing a lot of cases, and while Cyntoia’s case has gotten a lot of publicity, I don’t think you want us to treat hers any different than a whole lot of cases that I think people want us to review," Gov. Haslam told the crowd, per Rolling Stone. He told the crowd that his office would make a decision by the time he leaves office, which is in six weeks.

Haslam's revelation came after one person in the audience, Justin Laing, a higher-education professional, used the event as an opportunity to directly confront the governor about the status of Brown's clemency request. He reportedly posited that the question was relevant because the event concerned the important of education in Tennessee, and Brown had received her associate's degree from Lipscomb University while incarcerated.

“The Supreme Court’s decision that Cyntoia must serve 51 years before she can be considered for parole is a human rights issue,” Laing said, per Rolling Stone. “And so I ask you, what really, functionally, is the difference between life without parole — which is no longer constitutional as the United States Supreme Court declared for minors, for any crime — and ‘you might get parole after 51 years,’ for a victim of sex trafficking?”

The crowd was reportedly unhappy with Haslam's answer, however, and responded with chants of, “What do we want? Clemency! When do we want it? Now!” and “No justice, no peace."

Brown was convicted in 2004 for killing 43-year-old real estate agent Johnny Allen. She was 16 years old. Brown testified that she had been staying with an abusive boyfriend who she said raped her and forced her into prostitution, according to court documents.

Allen solicited Brown for sex, according to her testimony, ultimately bringing her back to his home where, she said, he bragged about his gun collection. Later, when in bed, she said she thought that he was reaching for a gun, and she was scared about what he was going to do to her. In response, she pulled a handgun from her bag and shot him.

Brown was tried as an adult and convicted of first-degree murder, felony murder, and aggravated robbery. Prosecutors argued that she killed Allen because she planned to rob him, according to multiple reports.

It's not at all clear whether or not Gov. Haslam will grant Brown's clemency request. In the meantime, activists — as well as several celebrities — have been campaigning on her behalf, rallying under the hashtag #FreeCyntoiaBrown.