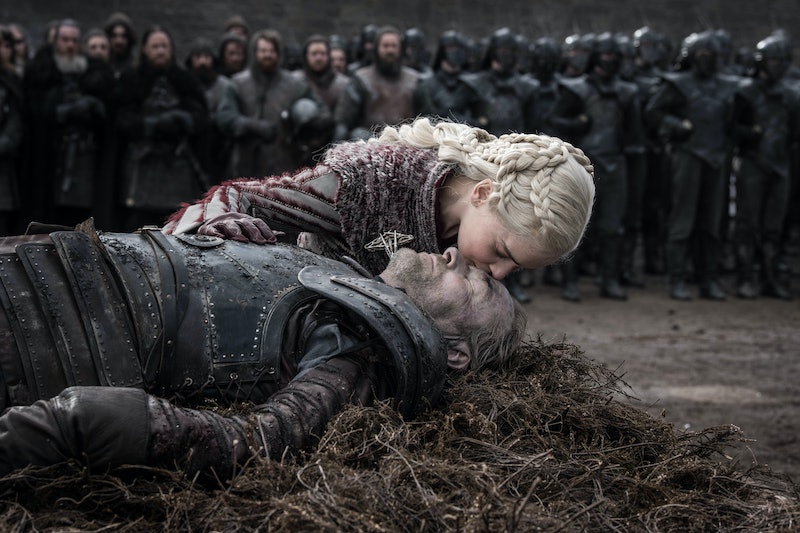 Jorah died a hero's death during the Battle of Winterfell, but Daenerys' loyal advisor and friend made one final appearance during Sunday night's episode as the survivors paid their respects to those who had fallen. But along with all the tears that were shed, Dany whispered last words to Jorah on Game of Thrones during his final few moments of screen time. However, viewers were unable to hear what exactly it was that she said to him, surrounding that heartfelt goodbye with tinge of mystery. Luckily, actor Iain Glen, who played Ser Jorah on the series, opened up about that scene during a recent interview with Entertainment Weekly and hinted a bit about what it was that his costar Emilia Clarke actually said to him in that moment.

It turns out that whatever it was that Clarke said, was something that she herself was able to decide upon on her own. In the script, no actual words were given for her to say. According to EW, there was a line in the stage directions that read something to the effect of: “Daenerys whispers something to him that he’ll never hear and we’ll never know…” So it was entirely up to Clarke how she wanted to approach that final farewell. Did she say something sentimental to Glen? Did she crack a joke to help cut the tension or lighten the mood? They are friends in real life after all, so it's not completely out of the question.

Here's the thing, though: the whole point of that intimate interaction was so that these characters could have something exist just between the two of them, without anyone else being a part of it — including fans. So naturally, Glen didn't want to just come out and say what it was that Clarke whispered to him, but he did tease the sentiment behind the words.

"It’s something entirely sincere and true to the moment and something that I’ll never forget," Glen told EW. And while he knows that this is a question that fans will continue to ask him for many years to come, the actor is ready and willing to keep this little piece of information entirely to himself, adding: "I’ll always cherish it because it’s something no one will ever know but the two of us. And that’s a memory to hold onto."

With that in mind, it's safe to say Clarke wasn't attempting to make Glen laugh with any silly anecdote or anything while this scene was being filmed. Perhaps Clarke told Glen what a pleasure it had been working with him for all of these years. Or maybe she remained in character during this off-mic moment and had Dany promise Jorah that his death wouldn't be in vain, or that her victory of the Iron Throne would be done in his honor.

As of now, Clarke and Glen are staying mum on the details, but maybe over time the truth of what she said will finally be revealed. (Or maybe if we're lucky, Dany told Jon Snow about it — lord knows that guy can't keep a secret to save his life.) Fans may learn what those last words were at some point, but for the time being it's just one more Game of Thrones mystery that needs to be solved.