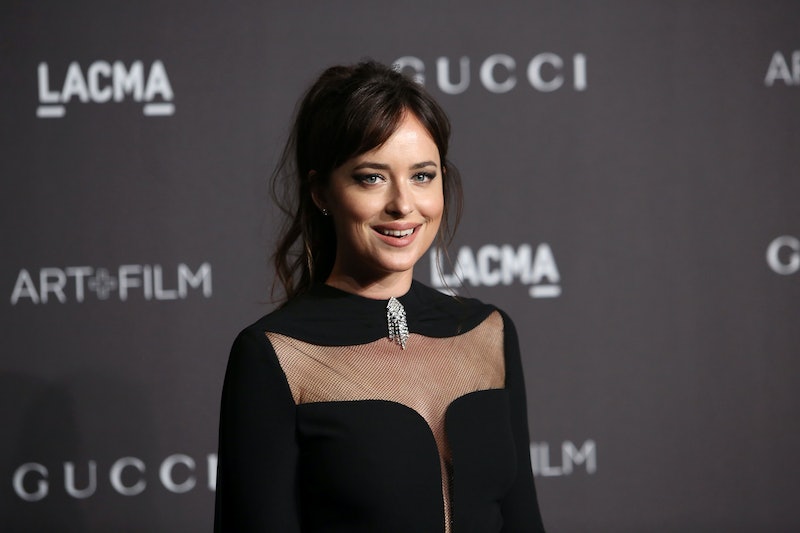 For those of us who have monthly periods, the whole process can sometimes feel a little bit straining. Maybe you suffer with terrible cramps, PMS, or the other challenging side effects during menstruation. Indeed, reports show that around 90 percent of us suffer some kind of PMS side effects, according to Huffington Post. So why is it that talking openly about periods still has some sort of stigma attached to it? Discussing menstruation in public seems especially taboo for celebrities and those in the public eye, which is why Dakota Johnson's recent comments about PMS are so damn vital.

The Fifty Shades star fearlessly shared her experiences in a recent interview with InStyle, commenting on the difficult issues she has had every month around the time of her period. She even explained how it can feel as though having her period is "ruining her life." Been. There. "If I’m honest, my hormonal changes during my menstrual cycle are ruining my life. Every month. It’s unbelievable," she told the publication. "It’s really f***ing amazing. I can’t get a grip on it. I’m like, 'what?' Every time, I’m totally scandalized about what happens to my body and my brain."

The star also commented on how being on her period has an effect on the way her body looks:

"My boobs are like eight times the size they normally are. It’s really a traumatic thing, and it happens every month. I just can’t get used to it."

And like many of us, Johnson revealed she is always having a constant struggle in knowing how to help her symptoms with birth control.

"It's also very tricky to figure out what type of birth control you’re meant to be on, and if it’s even healthy."

The actress went on to explain that this is one of the reasons she has become an advocate for Global Citizen: Reproductive education, and wants to fully "understand" and "honor" her body. Claps to you, Dakota. Can we just pause to take a moment to appreciate how valuable it can be when someones talks about how their period is making them feel. So often people suffer in silence, and conversations like this go a long way to normalising the conversation around menstruation.

Although rare, there have been other occasions when celebrities have shared their experiences with menstruation and not been embarrassed to mention it on social media. Janelle Monae notably tweeted the following in 2017:

And when this was met with backlash, she unashamedly wrote:

Other stars including Mindy Kaling, Katy Perry and Demi Lovato have also previously discussed their periods. This comes as culturally, we are finally managing to work towards ending period shame. Companies such as OHNE are proudly distributing period products, aiming to help in period poverty, and getting us talking about menstruation without shame. People like musician Kiran Gandhi are partaking in moments of activism like running the London Marathon while free bleeding, while activist Cass Clemmer has worked hard to raise awareness that "Periods Are Not Just For Women" under the hashtag #BleedingWhileTrans.

Here's hoping all these actions help move the conversation forward.