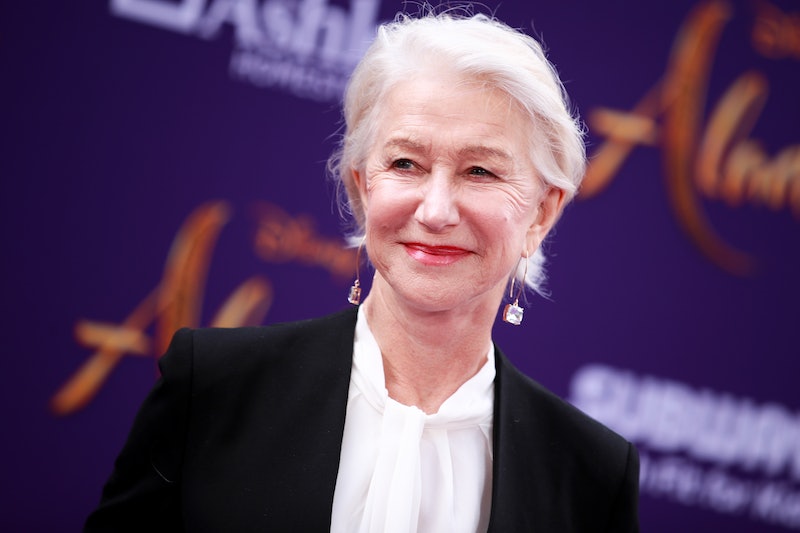 Helen Mirren doesn't find it entirely necessary to go to an upscale Hollywood salon to get her her hair trimmed. Instead, the actress has a more DIY approach. Helen Mirren cuts her own hair with kitchen scissors, and it will make you wonder why you bother dropping $70 for a trim.

Mirren revealed this beauty routine on July 12, when she appeared on the British daytime talk show This Morning. Mirren shared with the hosts that she doesn't always make an appointment at a salon when she needs a cut. Instead she takes matters into her own hands, and then has her stylist "Stefan" clean it up once she has time for a visit.

“I said to my brilliant hair guy here, Stefan, ‘The cut I have right now, Stefan, is something that I did with the kitchen scissors about a week ago in my kitchen. So you know, maybe you could clean it up a bit for me?’ So yes, I do cut my own hair,” Mirren said.

This isn't the first time that the actress admitted to cutting her own hair. She has been doing it for at least half a decade. In 2014, Mirren shared in an interview with Redbook that she gives herself her own trims because of how hectic her schedule is.

“I can’t handle going to the hairdresser every six weeks, so I only go about once a year. In between, I get out the scissors and do something, usually rather disastrously. Sometimes I’ll even chop my hair the morning of a big red-carpet event," Mirren said.

When This Morning asked what were some beauty tips that the Dame could impart to those watching, Mirren said that she didn't like using the phrase "beauty tips." Instead she preferred "being tips."

"My being tip is really to be curious and interested in other people and not think too much about yourself. Give your attention to other people and that has a way of making you, if you like, more beautiful in many ways," Mirren said.

Despite Mirren being a L'Oréal ambassador, she is pretty straightforward when it comes to her beauty routine. Mainly, she doesn't believe any of it works, but she likes putting on lotions and creams regardless.

“I’m not setting standards for others. All I can do is be who I am. I’ve always loved makeup,” Mirren said while sitting on a L’Oreal panel in 2017. "I'm an eternal optimist — I know that when I put my moisturiser on it probably does fuck all, but it just makes me feel better."

Mirren also believes that beauty on the inside comes first. But she's not about to deny that sitting in a stylist's chair makes her feel pretty damn glamorous. "I really do believe that beauty comes from within. It’s those moments when you’re well rested and you feel that the world is a wonderful place to live in that you’re at your best, isn’t it? It’s not an outer beauty, it’s an inner feeling of peace," Mirren told Woman & Home in 2019. "Having said that, I also feel pretty beautiful when I’ve just spent two hours in hair and makeup!"

From not believing in lotions to cutting her own hair in the kitchen, Mirren is an inspiration when it comes to her laid back beauty routine.