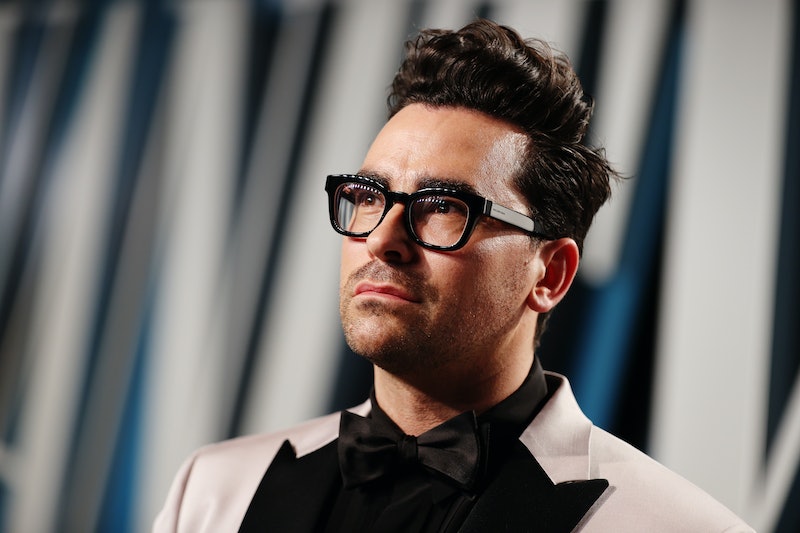 It was with a heavy heart that fans collectively watched the Schitt's Creek finale on Tuesday, April 7, bidding farewell to the Rose family and a truly groundbreaking sitcom. But if you thought it was difficult to see the show end, that's nothing compared to what the cast was feeling. In fact, that very evening Dan Levy penned a heartfelt message to Schitt's Creek fans, acknowledging just how much this show has meant to him throughout the last six seasons and how grateful he is to have worked with such a wonderful cast and crew.

"This show has been the love of my life for the past seven years," Levy wrote in a note on Twitter. "Getting to tell these stories, build these characters, and watch them grow has been a privilege for which I will always be grateful." Levy, who played the titular character of David Rose, had known this show would always be a family affair right from the beginning. His real-life father, Eugene Levy, not only played his on-screen dad, Johnny Rose, but also served as co-creator of the series with his son.

"Working with this brilliant cast and crew and basking in the glow of their extraordinary talent for six amazing seasons are what I'm going to miss the most," he continued.

Levy proceeded to turn his attention to the fans themselves, thanking them for their overwhelming love and support, and making them sob all over again. "As for our viewers, getting to share this show with you, getting to watch you champion it, tell your friends about it, herald its messages of love and acceptance with such empathy and passion… that is something I will never forget," he added. "The stories you have shared with me over the years have made me laugh and cry and feel empowered to keep making things that mean something."

In fact, hearing so many heartwarming stories from fans made Levy realize that "television has the power to not only bring people together in profound ways, but also the power to change conversations and consequently change lives."

But just in case that alone isn't enough to bring a flood of tears to your eyes, Levy's mom, Deborah Divine, also shared a sweet message of her own on Twitter, commending her son for the brilliant project he helped to create. "Today I regret every single second of worry back in the uninformed 80’s-wondering how the world was going to treat my brilliant little boy who loved to twirl," Divine wrote, seemingly referencing the show's groundbreaking LGBTQ characters and romances. "Little did I know that he was going to kick that old world’s ass to the curb and create a brand new one."

It'd be easy to lament losing such a groundbreaking show and lash out like a disgruntled pelican. But truthfully, the series gave so much more than it received and deserved to go out on its own terms with our best wishes and warmest regards.