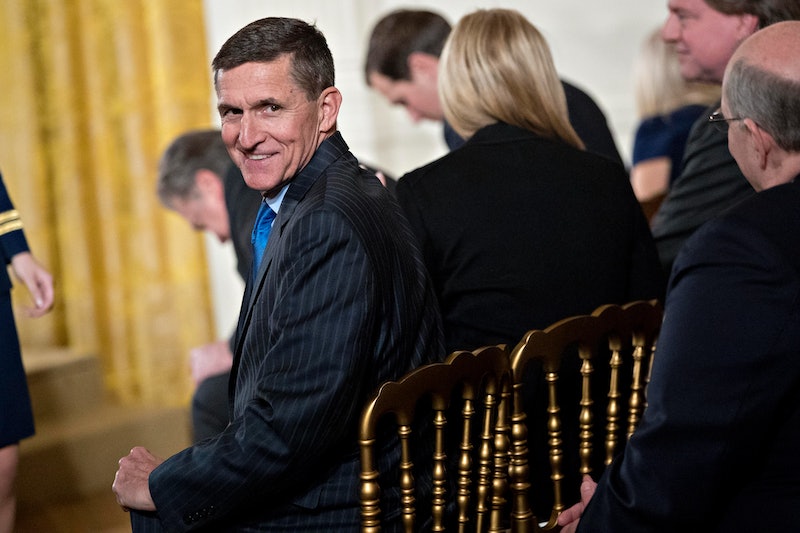 Fasten your seat belts, ladies and gentlemen — if this morning is any indication, you're in for a bumpy ride. And it's not just me saying this — take it from someone who really knows his stuff. The granddaddy of news himself, Dan Rather, compared Michael Flynn's Russia talks with Watergate, suggesting that this could be the beginning of a "a debilitating Constitutional crisis." Rather saw quite a lot in his 43 years at CNN — so when he says something like this, it's definitely worth listening.

The Flynn controversy has so many layers that it makes perfect sense for Rather to latch onto it. First of all, you have the very basis of the scandal: General Flynn had a conversation with the Russian ambassador in December of 2016, and couldn't confirm whether or not he had discussed the Obama administration's sanctions leveled on Russia. Flynn then misled Vice President Mike Pence, who had defended the national security advisor, about the call's contents — although Trump had apparently heard about Flynn's alleged conversation previously. Russia denies that the ambassador and Flynn discussed sanctions at that time.

In his resignation letter, Flynn said he had apologized to Pence for "inadvertently" misleading him as to the discussion's content. In the letter, he never explicitly revealed what he discussed with the Russian ambassador prior to Trump's inauguration.

Former Attorney General Sally Yates, before she was fired, even warned the administration that Flynn was susceptible to blackmail because of the alleged contents of the call, but Trump still did not think it was worth firing Flynn from his position as national security advisor. The exact subject matter of the phone conversations, as The New York Times notes, has still not been disclosed.

Let's turn to Kellyanne Conway now, who often acts as the voice of the administration. In an interview with Matt Lauer, Conway said that Flynn misleading Pence had become "unsustainable" — while also claiming that Flynn had the full confidence and trust of the president until he handed in his resignation. She went on to say that "as time wore on, obviously the situation had become unsustainable," referring to Flynn's involvement in the most sensitive of the country's affairs despite his having misled the vice president. As Greg Sargent noted in the Washington Post, however, that was "an implicit concession that Flynn had been kept in this highly sensitive role despite the fact that his situation had become 'unsustainable.'" And that's not a good sign.

Let's get back to Rather and Watergate. The Watergate Scandal, once the high water mark of political scandals in American history, is now starting to look like small potatoes. The basic story is that a couple of men got caught trying to wiretap the Watergate complex, where the DNC had their headquarters, on behalf of Nixon's reelection campaign. And then it became clear that much of this business had actually been recorded by the White House taping system. Nixon refused to turn over the tapes to the Senate Watergate Committee, and so the House Judicial Committee moved to impeach him based on his obstruction of justice. The president, not wanting to face impeachment, became the first president to resign.

That's an extremely simplified version of the story, but you get the point: Nixon essentially tried to cheat in order to get reelected and then wouldn't admit to it. On the subject of Flynn, Rather said that "we may look back and see, in the end, that it is at least as big as Watergate. It may become the measure by which all future scandals are judged." Given how it's gone so far, can you really disagree?