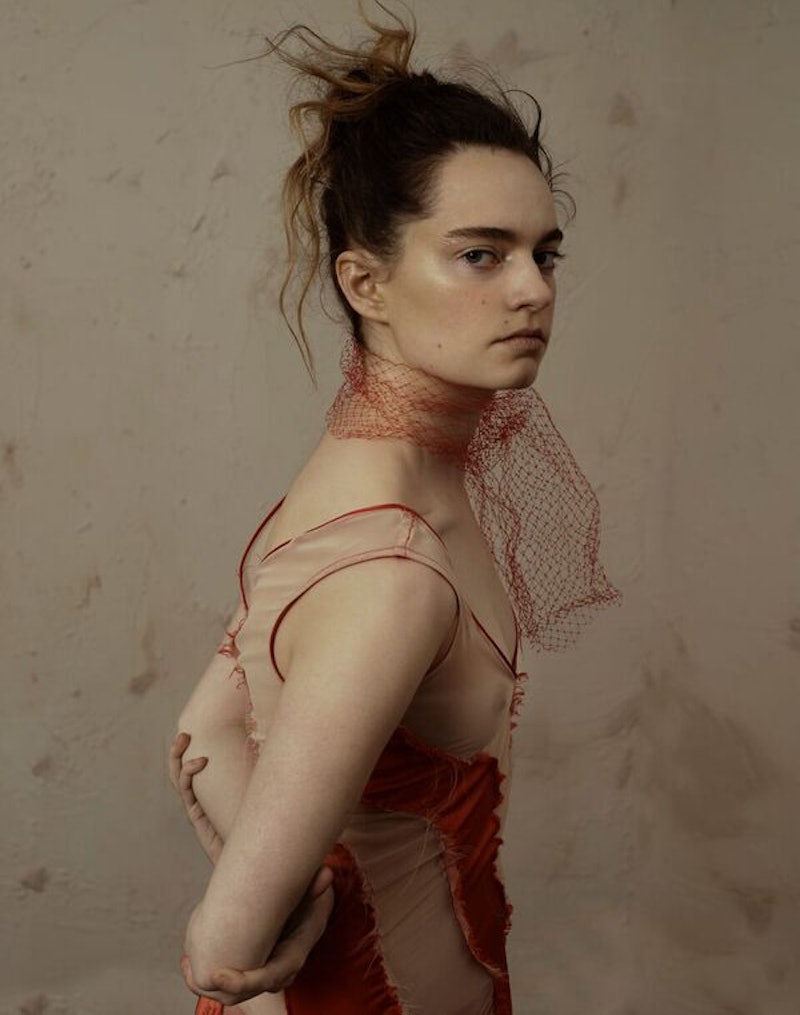 At age 22, after a lonely year in a dark auditorium, Emma Portner officially became the youngest woman ever to choreograph a musical —Bat Out Of Hell — on London's West End. In late June, she returned home to Los Angeles to find entrance music welcoming her arrival. Stilted notes of Britney Spears' "Lucky" floated from the living room. Portner followed the sound to see her partner and collaborator, the Emmy-nominated actress, Ellen Page, playing an acoustic guitar and singing the words, on the cusp of a laugh. The two women took the moment to Portner's studio space, where the dancer improvised steps as careful as the song's assessment of fame as an iPhone camera recorded the whole thing.

That generosity of spirit on video is a hallmark of Portner's output, whether she's making a Justin Bieber video or sharing confessional movement sketches on Instagram. There's no divide between Portner's work and her self.

“Contemporary dance is very, very, very emotional. It pulls a lot out of you, and you have to pull from the deepest parts of you almost every day in order to make a living doing it,” she says, taking a break in the open ballroom in Orlando where she’s been teaching at a national dance convention.

For Portner, even rest is an opportunity to practice honesty. On a recent weekday morning, needing to center herself, she pulled on Adidas shorts, socks, and a roomy black T-shirt (the kind she always wears to dance), and walked into an open ballet class, alongside prima ballerinas like Julia Cinquemani and Chelsea Paige Johnston of the Los Angeles Ballet Company, who donned their pointe shoes and bodysuits.

She steadied her hand on the barre.

“No one said anything," says Portner, audibly grateful. “It was probably one of the best classes of my life, truly.”

Leotards and tights are the long-surviving ballet dress code because they create lines, articulate movement, shape finer brushstrokes of a work. They can also enforce gender binaries and perpetuate norms that dancers like Portner don’t find themselves comfortable in, physically or emotionally.

The seriousness and rigor of the Renaissance-born movement Portner was first trained, at Leering Danceworks and the National Ballet School of Canada during the summers, still form the basis of her art. She lent tender, fluid sculptures to Justin Bieber’s “Life Is Worth Living,” a video she choreographed for and performed in; to visuals for Blood Orange’s hazy (a)R(t)&B; a series of expressive projects set to folk-structured songs, one of which — "Dancing In The Dark" — had viral impact, and now, more subtly, the universe of musical theatre as the only woman on the creative team for Bat Out Of Hell.

“It’s your job as the choreographer to do the job. You’re not hired to upset people or make people uncomfortable,” Portner says. “It was a constant battle between — how do I make myself feel good about the work — and the other 55 people feel good about it, too?” she says. “And the musical theatre world is a microcosm for the macro world in terms of it being filtered all through the male and white experience.”

As an eight-year-old, she recognized herself as an outsider in the starkly gender-conventional dance world. She asked her mom why she couldn't wear what the boys wore to class.

Portner's own experience has become transparent in her work. As an 8-year-old, she recognized herself as an outsider in the starkly gender-conventional dance world. She asked her mom why she couldn't wear what the boys wore to class. The expectation to "dance smaller," to be less comfortable in every sense possible, was one she couldn't meet.

"There’s this weird norm happening [at convention classes] where they’ll call out, 'OK — only the boys come out.' And it's unfair, because in dance there's an extreme imbalance of woman to men, especially in the commercial contemporary world. So if there’s a boys' group, they get so much more seen than the women. They get more space. They get more for their money. They just get more," she says.

Now, as a queer woman, she communicates expansion, persistence and yearning for connection in her widely viewed Instagram videos. Her presence there — she has more than 36,000 followers — is what gets her work as a choreographer and performer, she says. Portner doesn’t have an agent. Director Jay Scheib first reached out about a potential collaboration for Bat Out Of Hell via Vimeo direct message.

Torch-bearers for contemporary dance as an agent of social awareness have historically been limited by the obscurity of the genre. Pearl Primus, for example, changed the music of her performance to only the words of Lewis Allan's poem "Strange Fruit," aiming to speak directly to the complicity of white people who stood by as their families lynched their black neighbors. Primus had only the stage, of course, and not the internet, on which to share her narratives. Portner has both, and understands the great responsibility her white cis privilege and the reach that comes with it commands. She can't control the experience of everyone watching at home, and that's okay with her.

"Accessible, online film is a risk in that way," she continues. "A risk I love, because of that small chance I may happen to reach a young, alone, and unsure little Emma on the other side of the world. Or a closeted and questioning friend down the street. Or that misunderstanding parent upstairs. Or the 'you' on the other side of this screen now."

On the last day of production for Bat Out Of Hell, Portner directed a performance at East London's ornate lavender-splashed Troxy Theater. Set to the song "Spook" by Adult Jazz, the piece was a collaboration with her sometime student Ajani Johnson-Goffe, and filmed by Karim Andreotti. In it, Portner and Johnson-Goffe struggle together in attire referencing the venue’s time of origin, dancing in painful conversation that occurs mostly in the aisles and seats. Later, Portner learned of the "Lavender Scare," a strain of McCarthyism that encouraged firing and intimidation of gay leaders in United States government posts.

"I quickly reflected on who would have even had access to such a theatre space, back when it was built in 1932," says Portner. "To not only perform, but to watch. What it would mean for a Black queer person at that time, who would not even be able to enter such a space or given the permission to freely exist in society ... my privilege of being able to 'pass' in the ways that [Ajani], due to the intersection of his identity, would not be able to," says Portner.

More like this
Pro Footballer Zander Murray Is "Blown Away" By Support After Coming Out
By Sam Ramsden
An Honest Review of MeUndies Boxers, According To A Non-Binary Person
By Megan Lasher
The 19 Best Tweets & Memes About Bisexual Awareness Week
By Lexi Inks
'Heartstopper' S2 Just Welcomed Four Brand New Cast Members
By Nola Ojomu and Sam Ramsden
Get Even More From Bustle — Sign Up For The Newsletter