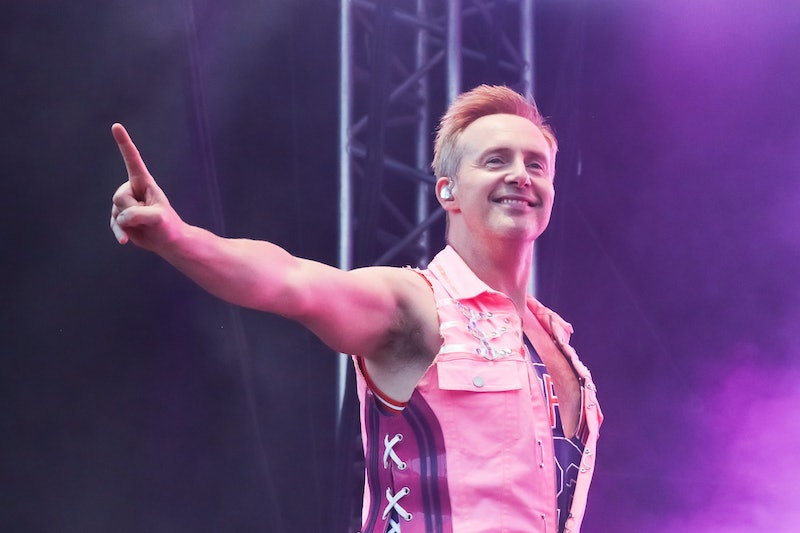 Whether it's Strictly Come Dancing or Dancing On Ice, viewers of all ages love tuning to see celebrities do something totally out of their comfort zone. It's make for a bit of old fashioned family telly time. However it's fair to say that some elements of these dance shows are, well, a bit too old fashioned. So news that Dancing On Ice is going to have a same-sex couple is just about the best thing I've heard all week.

A source has reportedly told Digital Spy that it was a contestant who pitched the idea of a same-sex couple to the show's producers. Ian 'H' Watkins, former member of legendary band Steps, came out publicly in 2007. The singer will be appearing in the 2019 series of Dancing On Ice, and reportedly "enquired as to the possibility of being paired with a male professional skater," Digital Spy writes. The producers of the ITV show supported the idea, Digital Spy reports, meaning Watkins is potentially going to be paired up with professional Matt Evers.

I reached out to ITV for a comment on this potential pairing and they said that they "won't be commenting on speculation around the Dancing On Ice pairings until closer to the new series in 2020."

Evers, who came out in 2018, spoke to Northern Soul about being queer in the skating world. In his interview, he addressed the fact that, despite what people may think, members of the LGBTQ community are still the minority in ice skating communities, saying:

"It's taken a hell of a long time but things have definitely changed massively in the past 20 years since I was competing. To the surprise of many though, I think there are actually more straight guys in ice skating than gay. Deciding to come out is a tough call when you’re in that mindset of Olympic or world competition."

Watkins came out back in 2007 in an interview with The Sun. He explained at the time that, growing up in a small village, being gay just wasn't something you could be open about. He even made reference to the famous "only gay in the village" skit from Little Britain. Since that interview, Watkins has had relationships in the public eye and has also become a dad.

In the world of celebrity dance competitions, same-sex couples is a relatively unprecedented concept. As a matter of fact, despite constant speculation, only a few competitions across the globe have actually included same-sex partners in their shows. Pink News reports that drag legend Courtney Act, AKA Shane Jenek, danced out of drag for one episode of Australia's Dancing With The Stars. And in Germany's version of the show, Let's Dance, had a female same sex couple, Kerstin Ott and Regina Luca.

Hopefully this news about Dancing On Ice is true, and we'll be seeing a same-sex couple on the show very soon. The real dream is for this to move the needle on TV dance shows, making same-sex couples a regular occurrence in prime time shows.