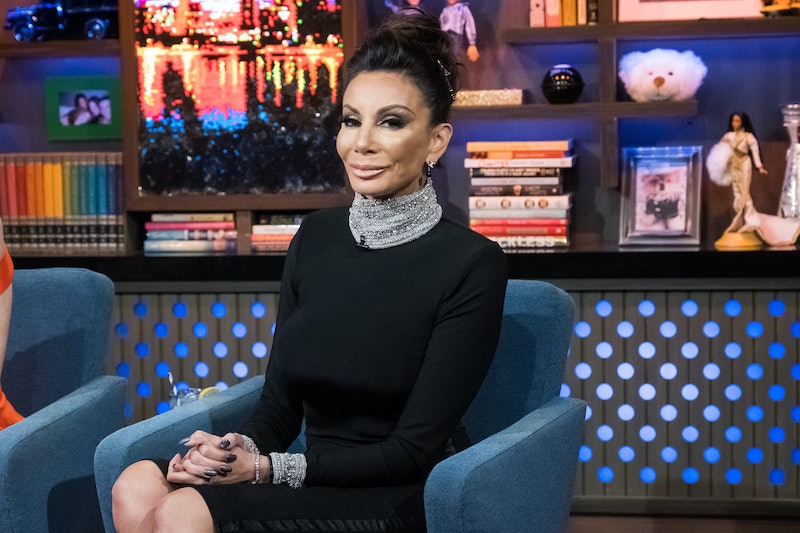 An OG Housewife from the Real Housewives of New Jersey is saying goodbye once and for all. Danielle Staub is leaving RHONJ for good, she revealed during an appearance on Watch What Happens Live with Andy Cohen on Wednesday, Jan. 8. Danielle first appeared as a Housewife in the first two seasons and then became a "friend" when she returned in Seasons 8, 9, and the current Season 10. But, now, she doesn't want anything to do with the Jersey Housewives.

She told WWHL host Andy Cohen that after being part of the franchise for the past many years, she's ready to move on and focus on something that "makes my heart happy every day." Danielle then declared, "I will be never returning as a Housewife again." Cohen was shocked by Danielle's use of the word "never" and made it clear that this was "entirely" her move and not Bravo's decision.

However, Danielle made to sure to add that she's "never" coming back to RHONJ specifically. As she clarified to Cohen, "Nope, never returning as a Housewife again — with the Jersey girls." So, she might be open to Real Housewives of New York City or another franchise, but it's too soon to say whether or not that would ever happen.

Based on how RHONJ Season 10 has been going, it's really no surprise that Danielle wants to take her final bow. From the tension with most of the RHONJ cast minus Teresa Giudice who has been her only supporter this season, Housewife Margaret Josephs dumping water on Danielle's head, and then Danielle dragging Margaret by her ponytail (which Danielle doesn't regret), there's been a lot of drama, even for Jersey. The season has also focused on Danielle's divorce from ex-husband Marty Caffrey, who fans watched her marry in Season 9. According to Danielle, she said on WWHL that Caffrey is one of her "dearest friends" now. Caffrey was even in the WWHL audience on Wednesday.

As for what comes next, she She told Cohen that even though she's done with RHONJ, she's releasing her own fragrance and starting her own cooking channel, potentially called Cooking Therapy, where she'll make gluten-free and dairy-free meals. And if either of those projects lead back to the land of reality TV and Bravo, just know it won't be leading her back to New Jersey.