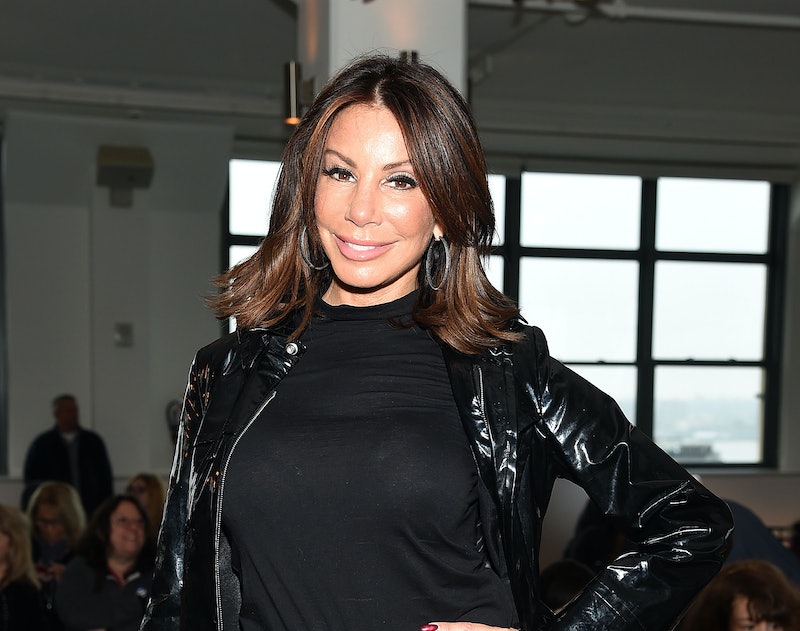 So much of Real Housewives of New Jersey Season 9 centered on Danielle Staub's wedding preparation to marry Marty Caffrey. They tied the knot in May 2018 and announced their split two months later. Sadly, their divorce proceedings lasted longer than their marriage. Now, it appears Danielle from RHONJ found happiness with someone new after her very public and drawn-out divorce.

On Feb. 21, Danielle and Marty's divorce was finalized, according to TMZ. Even so, she seems to be in a great place these days. For instance, on Feb. 25, Danielle posted a photo of herself kissing a man on Instagram with the caption, "Mystery solved." Well, actually, that did not really "solve" much. Danielle didn't tag anyone in the photo or mention a name in the caption. Instead of solving a mystery, Danielle started a whole new one for the fans.

Even though Danielle didn't reveal her new man's identity, she did tell People, "We're in love," during a Feb. 25 interview. That same People article quoted sources who said that the mystery guy is Oliver Maier, who work in private equity/venture capital in New York City. He also reportedly owns some vineyards and other businesses. The reality star's rep told People, "Danielle is very much looking forward to moving on to the next chapter of her life and is excited to see what that will look like."

Danielle's rep also said, "She is incredibly grateful for all the support she has received from her children, family and friends." And one of those friends is fellow Real Housewives of New Jersey OG Teresa Giudice. Clearly, she approves of Danielle's post-divorce romance, since she commented on the Instagram post with some fire emojis.

Danielle's ex-husband Marty also briefly discussed her new relationship in a Feb. 25 interview with Us Weekly. Marty revealed, "I don’t know him. Danielle still lives here." Yes, they still live in the same house even after their divorce. Marty emphasized that the two of them are "cordial." In that same interview, Marty claimed, "They couldn’t be dating any more than a week or two, but that doesn’t matter to me."

That wasn't the only remark that Marty made about their unconventional living situation in the Us Weekly interview. In fact, he hopes that Danielle's new man can help him and Danielle end their tenure as roommates. He said,

"I hope he’s the one to write the check and buy my house and contents and pay her outstanding debt to me. It’ll save me the trouble of selling in the market. In fact, I’ll shake his hand and thank him. If she’s happy, I’m happy for her. We’ve both been dating."

An inside source spoke about Danielle's new relationship in an interview with Page Six on Feb. 26 "They were friends first, then became romantically involved." That same person said, "He is a true gentleman and Danielle has told family and friends that she is very glad to be in a positive relationship where she is respected and treated like a lady.”

And that's exactly what her fans want to see. One fan wrote on Danielle's IG post, "No one in this world is more deserving of love than you. You are glowin mama." Another added, "I'm happy for you, Danielle. Double Standard how quickly men move on and are praised for it, when a woman does, she's shamed. Love you and have fun." Meanwhile, someone else wrote, "Ever since I was a little kid, I watched you on the Housewives and I hated how everyone mistreated you. I'm so freaking happy to see you enjoying life with the love of your life."

Danielle is happy. Her girl Teresa approves. Her fans are thrilled for her. Even her ex is good with it. After so much attention on her short-lived marriage, Danielle is finally in a happy place.