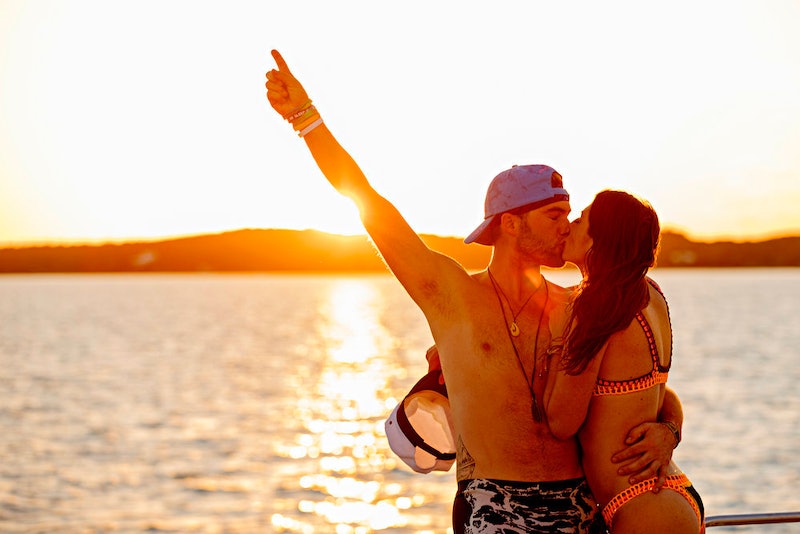 Danielle from Bravo's new show Unanchored may seem like a Type A, no-nonsense doctor, but you would still have to be pretty laid back to go on a three-week long yacht party in the Bahamas. Especially one filled with neon leggings and drunken shenanigans on the high seas. Danielle's Instagram also shows that the Unanchored star is much more than the headstrong personality she's been viewed as on the series thus far. She loves to have adventures all over the world, and her social media reflects that fun-loving side.

Her Instagram also catches fans up on her relationship status with Barrett and whether that move to San Francisco went well. See, the show was filmed almost a year ago, with the cast saying during the premiere that it was almost New Year's. And since the main drama storyline for Danielle and her boyfriend (and co-star) Barrett is whether or not they will survive the trip and will she still move to San Francisco to live with him, her Instagram also serves as a major spoiler for the series as a whole. So read on with caution if you're trying to keep the mystery alive.

Rest assured that Barrett and Danielle are still dating, and they still like to dress up in ridiculous outfits.

Much Of Her Instagram Presence Is Her In Costume

Danielle's always down for a costume party on land or sea.

Coachella Is A Favorite Event Of Hers

She and Barrett have been multiple times.

She's Working In Her New City

Danielle made the move to San Fran after all, and she's now a doctor at St. Mary's Medical Center.

She's A Fan Of Her New Home

Danielle loves New York City so much that it's even in her Instagram name, but she seems to be adjusting to her new state just fine. She hashtagged this photo "#ithinkilovecali."

But That Doesn't Mean She Wasn't Sad About Leaving NYC

It will be in her heart forever.

For a long time, Barrett and Danielle were in a long distance relationship, jetting back and forth from New York to San Francisco. Being in the same place together after all that must be nice.

Danielle Especially Loves Being On The Water With Barrett

They did meet because of their mutual love of sailing, after all.

She Also Learned How To Sail

She loved it too much not to.

She's Been Friends With The Unanchored Cast For Years

This photo of Danielle with Barrett and Vanessa is from way back in 2016. They have the same love of leggings though.

She Can Do The Dirty Dancing Lift

And She's Been Bitten By A Shark

She Also Likes To Ski

It's not all about water sports for this reality star.

She's Even Skied In Japan

Here she got to combine her love for skiing and traveling.

And She's A Runner

She did a half marathon in NYC.

But Sailing Has Long Held Her Heart

One of Danielle's very first Instagram photos from way back in 2012 was her boating. Seems like you can take the girl out of the water, but you—oh wait, no you can't. Danielle and boats go together just like Danielle and Barrett do.