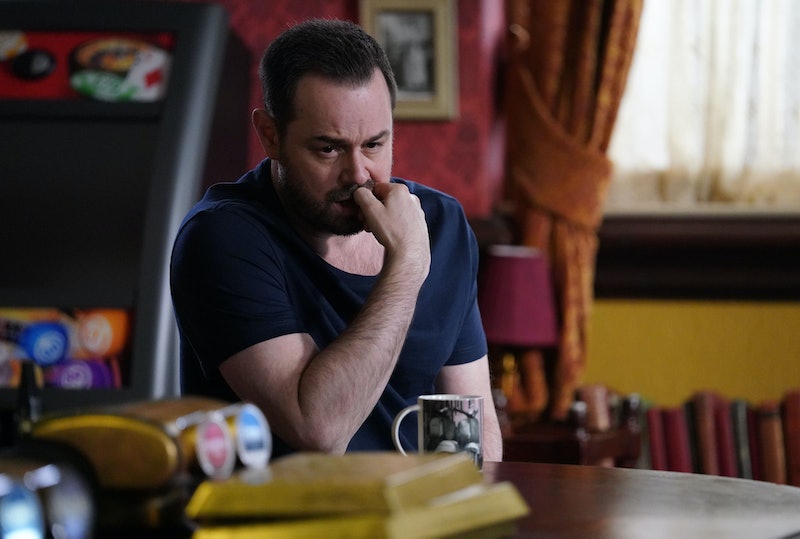 Unless you have been stubbornly hiding out under a humongous pop culture-sized rock (in which case, for shame), by now you will know that Love Island has gloriously returned for its fourth run on ITV2. This year's contestants are treating viewers to A-grade, first class, and top notch meme-able content, and I couldn't be happier. Case in point: these Danny Dyer 'Love Island' memes.

This year's series is even better, because, well, so are their parents. Following her incredibly short-lived stint on Survival of the Fittest (aka unofficial Winter Love Island) earlier this year, Dani Dyer is back in a bikini and looking for love on Love Island 2018. The 21-year-old barmaid was forced to pull out of Survival of the Fittest after just one day following a shoulder injury, but she's come back fighting on ITV2 to help keep viewers entertained this summer. And, as imagined, Dani couldn't resist sharing details of her famous parentage with her fellow Islanders before the first episode was even out.

Dani is of course the daughter of EastEnders actor and cockney legend Danny Dyer — and the pair actually have quite a lot in common. Indeed, not only does Dani share her famous dad's name, but she also shares his flair for pulling a pint (Dani worked as a barmaid before both Survival of the Fittest and Love Island, while Danny plays Queen Vic landlord Mick Carter in EastEnders).

Unlike her father, however, Dani has never had a child compete on one of the UK's most watched reality television series, which has proved an interesting factoid for viewers and meme-makers sitting at home. What does Danny Dyer make of Dani being on the show? Well, social media is rampantly speculating.

While Dani decided whether to couple up with a spectacularly white-toothed pen salesman, a hunky six foot five personal trainer, or a retainer-wearing junior doctor, her father Danny will surely be watching all the action from the (dis)comfort of his own sofa — much to the pleasure of viewers.

Here are just a few of their reactions:

Standard Love Island procedure sees the series' finalists receive in-villa visits from their nearest and dearest, meaning that if Dani makes it until the finale of the series, there is every possibility Danny Dyer himself will enter the villa and meet the man she has been sharing a bed with.

Unsurprisingly, this fact hasn't gone unnoticed by fans on Twitter, either. Here's what they had to say about that:

Dani has previously expressed that she would not have sex or even kiss anyone during her time in the Love Island villa. "I have so many eyes watching me," she told The Sun. "Kissing? No, I don't think so. I will just have to resist it, you know what I mean? I'll just have to do it when I get out. If they like me they can wait for a kiss — but if I have a glass of wine or something I could be in trouble because then I get flirty. I wouldn't have a daddy."

So, will Danny Dyer still be watching his daughter Dani Dyer's Love Island antics by series' end? And, will he make it into the villa himself? Only time will tell - but please keep those Danny Dyer memes coming for the next eight weeks, folks. And in the mean time, let's all collectively keep our fingers crossed that the moment comes that Danny Dyer ventures into the villa in real life.

More like this
Twitter Is Saying The Same Thing About 'Love Island'
By Sophie McEvoy
'Love Island’s Kai Fagan Is Very Clear About What He Doesn’t Like
By Sam Ramsden and Darshita Goyal
'Love Island's Tanyel Revan Has A Controversial Dream Dinner Guest
By Bustle UK
Is Winter 'Love Island' Flying Too Close To The Sun?
By Jason Okundaye
Get The Very Best Of Bustle/UK
Sign up for Bustle UK's twice-weekly newsletter, featuring the latest must-watch TV, moving personal stories, and expert advice on the hottest viral buys.