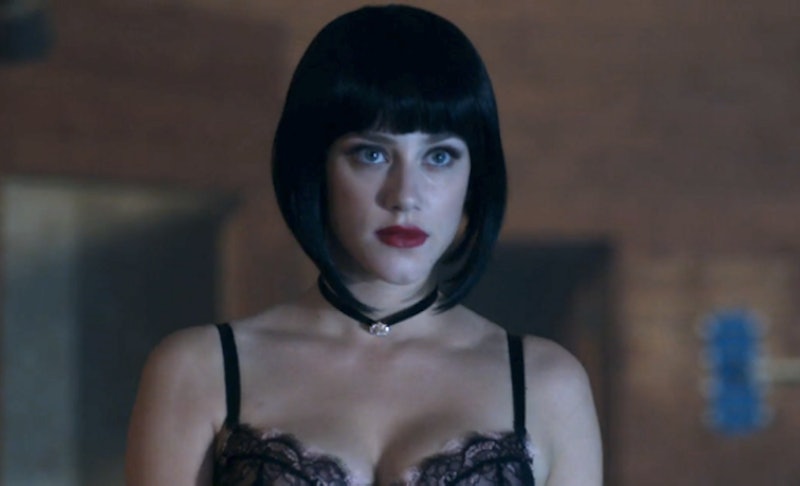 It's difficult not to fall in love with Lili Reinhart's portrayal of the sweet, doe-eyed Betty Cooper on Riverdale. However, over the course of the last two seasons this character has demonstrated that she isn't always just full of sugar and spice and everything nice. Sometimes Betty gets, shall we say, a little dark. But if Reinhart has it her way, Dark Betty won't return to Riverdale in Season 3, and she has a pretty justifiable reason for it.

During a recent interview with Teen Vogue, the Riverdale star opened up about her issue with Betty's alter ego persona and why she feels it's time to put this particular plot point to bed. “I think it kind of became a mockery of itself,” she explained to the outlet. “It was supposed to be this dark side of her that she wasn’t able to express otherwise, and it just became this weird sexual thing that people didn’t really understand.”

Reinhart makes a valid point. Whenever her character morphs into Dark Betty, it requites her to wear a black wig and revealing lingerie, which is a far cry from the girl-next-door Betty we've all come to know and love since the series began airing.

That's not to say that someone can't have varying sides to their personality. (We all have a touch of light and dark inside of us.) However, Reinhart feels that her transformation into Dark Betty has become more of a punchline rather than something that added anything all that interesting about her character. Of course, by the same token, Reinhart hopes that her role on Riverdale won't end up with her being typecast as a "Betty" for the rest of her career. She's eager at the chance to play other parts completely different from what she does now. “I don’t want to play Betty Cooper my whole life,” she added in the same interview. “I’m ready to play different characters.”

But while she remains on Riverdale, it's her hope to let Betty just be Betty, rather than add a dark side that comes with a full-on gimmicky costume change — which sounds fair enough. It's not as if Betty won't have enough going on when Season 3 premieres on Wednesday, Oct. 10. Based on the released footage so far, the town of Riverdale faces just as much drama and danger in Season 3 as ever before. Archie's in jail, the Lodges are ruling over everything with an iron fist, and don't forget The Gargoyle King that's going to pop up at some point. Suffice it to say, there might not be any time for Dark Betty to show up even if Reinhart wanted her to, which she doesn't.

Some fans might be sad at the thought of Dark Betty leaving for good, but it's important to remember that it doesn't mean saying goodbye to Betty's darker nature. It just means she won't have to unnecessarily sexualize herself in order to do it. And since Reinhart is doing such a fantastic job of bringing this iconic comic book character to life, she deserves to have her wishes be met, whether fans agree or not.