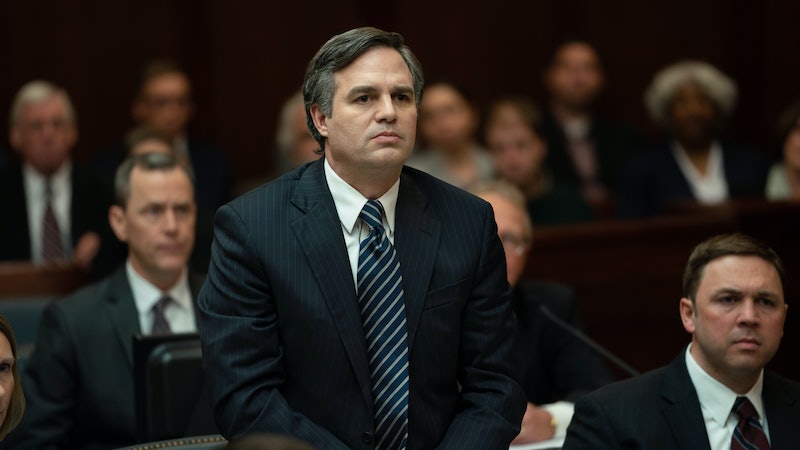 Mark Ruffalo's latest movie Dark Waters tells the story of a Cincinnati lawyer who takes on the chemical company DuPont after hearing from a farmer who claims that the company has polluted his local water supply. If that very real-sounding description makes you think that Dark Waters is based on a true story, you'd be right. The film, out November 22, is inspired by the story of attorney Robert Bilott.

Ruffalo, who also produces Dark Waters, said at an October screening of the film that he was inspired to tell Bilott's story after reading a New York Times Magazine article about him titled "The Lawyer Who Became DuPont's Worst Nightmare". "I just thought that's particularly powerful, we haven’t seen that story ever before," the actor told the Los Angeles audience, as reported by Variety.

Bilott had been working as a lawyer for Taft Law in defense of corporations like DuPont, but changed course when a West Virginian farmer, Wilbur Tennant, who knew his grandmother, called him up looking for representation. The farmer wanted to take action against DuPont, as he believed that the company's potential contamination of the water supply was the reason his cattle kept getting sick and dying. "There was a reason why I was interested in helping out the Tennants," Bilott told the New York Times Magazine in 2016 of the case against DuPont, which kicked off in 1999. "It was a great opportunity to use my background for people who really needed it."

Bilott went on to take further action when it came to the regulation of the chemical PFOA (perfluorooctanoic acid) being found in water supplies and in humans' blood. He spearheaded contact with the Environmental Protection Agency that led to DuPont reaching a $16.5 million settlement with the EPA, as well as a class action lawsuit that began in 2001 and led to over 3,500 people filing personal injury lawsuits. In 2017, DuPont and spinoff company Chemours agreed to pay $671 million to settle the lawsuits, with both companies denying any wrongdoing, Reuters reports.

Ruffalo, who is an environmentalist who founded the non-profit Water Defense, saw telling Bilott's story as a way to connect his activism with his career in entertainment. "I wanted to take film and tell those stories of real people on the front lines fighting for their lives every single day, [who] we never hear from, never hear about," he said at the screening. "And this was a way for me to take my art form and be not political, but human."

Bilott, who was also at the screening, said that the film is "the truth." "They did an amazing job condensing [20 years] into two hours," he said. "I was a little skeptical at first… about whether I should do something like this, but it was clear that [Mark] was doing it for the right reason: to bring the story out, to do it accurately, and [he] wanted to show what really happened."

Dupont released the following statement to Bustle in response to Dark Waters' depiction of the company and the case:

Safety, health and protecting the planet are core values at DuPont. We are — and have always been — committed to upholding the highest standards for the wellbeing of our employees, our customers and the communities in which we operate.  As a science-based company, DuPont is innovating in all facets of our business  — in our policies and protocols as well as our products. Nothing is more important than the safety of our employees and the communities in which we operate.

Although DuPont does not make the chemicals in question, we have announced a series of commitments around our limited use of PFAS, and are leading industry in supporting federal legislation and science-based regulatory efforts to address these chemicals. [...]

DuPont is in the business of creating essential innovations the world needs today. Hollywood is in the business of telling stories. While seeking to thrill and entertain, these stories often stretch facts. Unfortunately, this movie claims to be 'inspired' by real events and appears to grossly misrepresent things that happened years ago, including our history, our values and science. The film’s previews depict wholly imagined events. Claims that our company tried to hide conclusive scientific findings are inaccurate. We have always — and will continue to — work with those in the scientific, not-for-profit and policy communities who demonstrate a serious and sincere desire to improve our health, our communities and our planet.