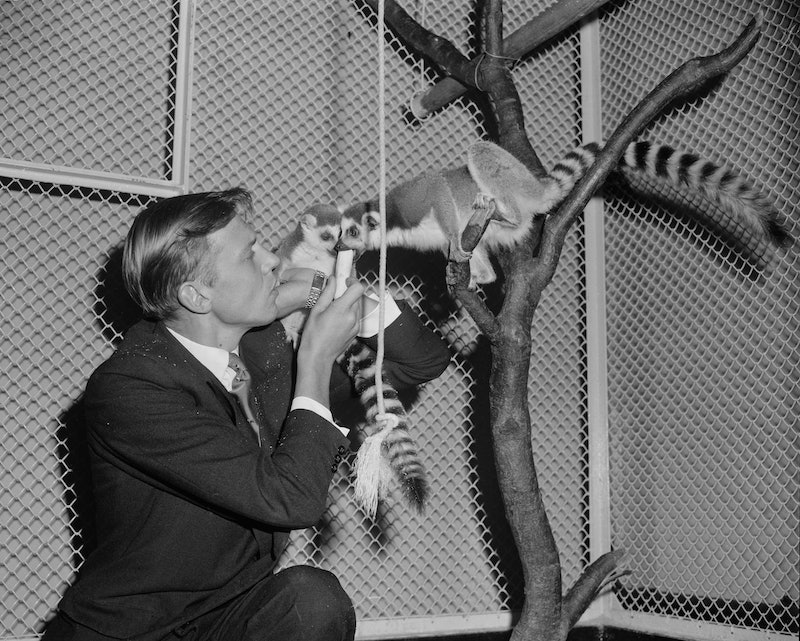 Although it's easy to think of David Attenborough as the avuncular silver haired man he is today, back when he started his broadcast career in the '50's, he looked seriously different. Now BBC Four is giving fans of the natural historian a chance to see it for themselves, airing their 2016 documentary David Attenborough's Zoo Quest in Colour once again on Sunday Jan. 12 at 7.30 p.m. For those who didn't see this masterpiece the first time round, here's why you should tune in.

If you are unfamiliar with Attenborough's early work, you may have never heard of Zoo Quest, which was first broadcast way back in 1954, launching the documentarian to fame for the first time. Zoo Quest was, at the time, a truly groundbreaking production, showcasing the diversity of our beautiful planet by visiting parts of the natural world, as well as remote tribal communities, that had never been filmed before.

The show came out ten years before colour television even became available in the UK, so it was original broadcast in black and white. However, with the help of some newly found colour 16mm film, BBC Four was able to inject it with all of the colours and shades of the natural world.

The colour version of the documentary was originally broadcast back in 2016 in celebration of Attenborough's 90th birthday. Speaking to the BBC at the time, he spoke about how awestruck he was to see the footage brought to life in colour: "I was astonished when someone said we've got nearly all the film of the first three expeditions you did in colour." He added, "I said 'it's impossible – we shot in black and white.'"

The 90-minute documentary will follow the first three expeditions of Attenborough's wildlife presenter career: Zoo Quest To West Africa, Zoo Quest To Guiana, and Zoo Quest For A Dragon. On top of this original footage, there's some behind-the-scenes stories from Attenborough and wildlife camera man Charles Lagus.

Most importantly of all, the BBC Four show will let the modern world see just how much of an effing hunk Attenborough was back in the day. Not only for his aesthetics but all of his swashbuckling adventures and feeding of baby animals. The thing is though, being hands-on in the wild isn't something you'd necessarily associate with Attenborough or his production teams. Quite the opposite, actually, but the purpose of this early work is slightly controversial as the plan was to capture animals in the wild and bring them back to London Zoo. According to the Telegraph, hundreds of rare creatures were captured in their homeland and sent to live in captivity. This, obviously, wouldn't fly today.

Attenborough admitted to the Telegraph in 2016 that he was initially hesitant to allow the footage to be broadcast again. "I remember doing those silly things, it was barmy," he explained. "I had some inhibitions about it being shown because you wouldn't do that today. And I thought, it's no good, you might as well face it, that's what you did and so you better not try and pretend it didn't happen."

David Attenborough's Zoo Quest in Colour will air on Sunday Jan. 12 at 7.30 p.m.

More like this
Eurovision Has Been Given A Whole New Look Ahead Of Its Liverpool Debut
By Bustle UK
Rupert Grint Just Shared A *Major* Update About Ron Weasley’s Future
By El Hunt
Claire Foy Spoke Out About 'The Crown's Gender Pay Gap
By Sam Ramsden
Olivia Colman Stars In First-Look Trailer For BBC's 'Great Expectations'
By Sabah Hussain and Sam Ramsden
Get The Very Best Of Bustle/UK
Sign up for Bustle UK's twice-weekly newsletter, featuring the latest must-watch TV, moving personal stories, and expert advice on the hottest viral buys.