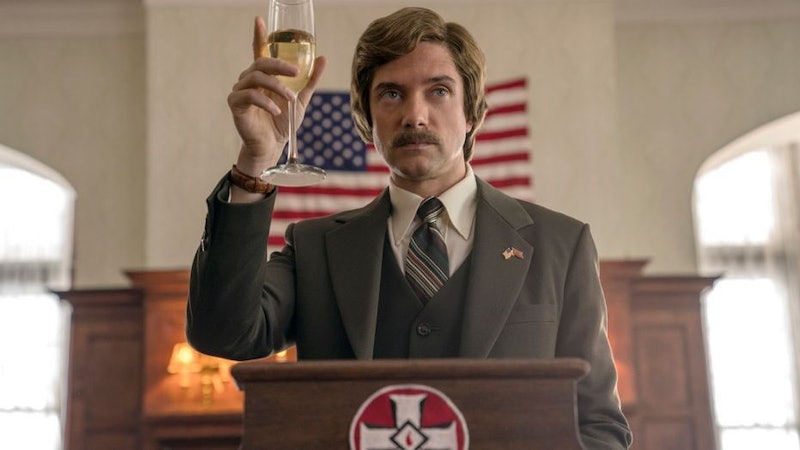 Spike Lee's latest film BlacKkKlansman puts the undercover work of Ron Stallworth, Colorado Springs' first black detective, on the big screen. Though his story wasn't revealed until after the real Stallworth retired and wrote a book, Black Klansman, about his experiences, back in 1978 he managed to infiltrate the local chapter of the Ku Klux Klan. Incredible as that is on its own, the story gets even wilder: during David Duke's real-life visit to Colorado Springs, the black man pretending to be a white racist was assigned as Duke's bodyguard. What happened during their in-person meeting is BlacKkKlansman's crowning moment.

When Stallworth saw an ad recruiting Klan members in a local paper, he replied with a letter, mistakenly used his real name along with an untraceable number the police used for undercover work. When they called Stallworth, he said he wanted to join, claiming he was furious his sister was dating a black man. Stallworth mailed in his application, but after not hearing anything for three weeks, as he told NPR, he "decided to go directly to the horse's mouth, so to speak, and I called David Duke directly down in New Orleans. And the day I called, lo and behold, he answered the phone." Duke went through the paperwork and told Stallworth there'd been a delay, but that he personally would see to it his membership was processed.

A short time later, Stallworth received his KKK membership card, something he carries in his wallet to this day as fond reminder of the time he pulled the wool over the notorious hate group's eyes. He and Duke communicated regularly over the phone, and as Stallworth told NPR, "I asked him at one point, aren't you afraid of an undercover police officer infiltrating your organization or maybe a black man calling you up and pretending to be white? He said, no. He wasn't fearful of that at all, because he could always tell when he was talking to a black person. And I might add, he never used the term black. He always used the so-called "N-word"".

In 1979, at the same time Stallworth was talking with him over the phone frequently, Duke came to Colorado Springs. He was slated to speak at a Klan rally held at Bonanza Steakhouse, and needed bodyguard protection. Stallworth's boss assigned him to the case. Stallworth's partner Flip couldn't go, as he'd pretended to be Stallworth when face-to-face meetings were necessary and would be attending the rally undercover. Speaking to The Daily Beast, Stallworth recalled that he was "sweating bullets" that Duke or any of the men he'd been in contact with would recognize his voice. Still, he did his duty as an officer of the law.

“I went and introduced myself to David Duke without giving him a name and told him I would do everything I could to protect him even though I didn’t agree with him. We shook hands and I became his bodyguard,” Stallworth said.

He spent the next six hours in a roomful of avowed racists, guarding them from harm. At the end of it, Stallworth was boggled to realize neither Duke, the local Grand Dragon, or his recruiter had picked up on who he really was. As he put it to The Daily Beast, "none of these three idiots recognized the fact that I was the voice of who they were talking to on the phone."

In a moment lost to history but captured in BlacKkKlansman (out now) at the end of the rally, Stallworth asked Duke for a favor. Walking over with a Polaroid, he asked if Duke would take a picture with him, as no one would believe he'd met the leader of the KKK. Duke agreed but said he couldn't be seen being touched by a black man. Stallworth said he understood, and got Chip to take the photo. Just before the count of three, Stallworth threw his arms around the two Klansmen; they reacted, but the camera was faster. As he told The New York Post, “[Duke] reached toward me and I looked him in the eye with the coldest, most intimidating gaze I could collect and told him, ‘If you touch me I’ll arrest you for assault on a police officer. That’s worth about five years in prison. DON’T DO IT!’" Duke backed down.

Though a picture's worth a thousand words, BlacKkKlansman's full story behind the now-lost photo is even more priceless.