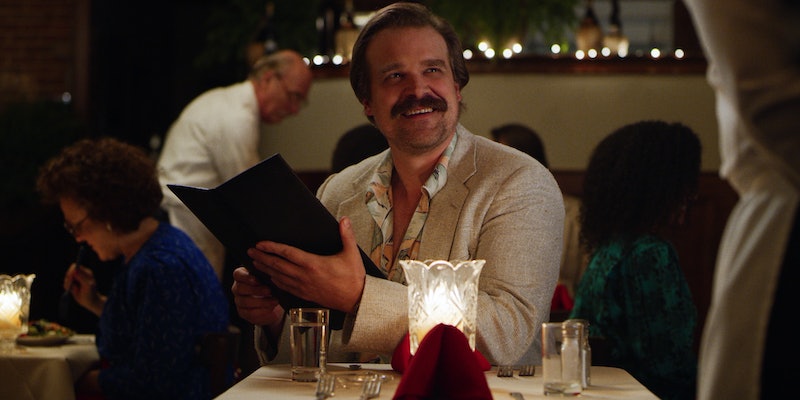 Warning: Stranger Things 3 spoilers ahead! Dealing with Mind Flayers and Upside Down creatures can be a dangerous business, which is why viewers have lost so many beloved characters at the hand of these monsters. (RIP Barb and Bob!) However, the end of Season 3 resulted in the most tragic death yet when Jim Hopper couldn't escape the machine explosion in time and appeared to be vaporized — or did he? David Harbour opened up about Hopper's Stranger Things 3 fate during a recent interview with Entertainment Tonight and it seems he's not entirely convinced his character is gone for good — particularly thanks to that ominous post-credits scene.

Shortly after the Episode 8 credits start to roll, the scene shifts to some sort of army base in Russia. Soldiers are shown walking the hallways of what looks like prison cells. They go to open one door, but one of the men says, "No, not the American," which prompts them to open a different cell. Given that Hopper's body was never shown, fans have started theorizing that Hopper is the American in question, having somehow survived the explosion before getting captured by Russians. Anything is possible when it comes to this show, which is why Harbour thinks fans shouldn't totally rule out the idea, as wild as it may seem.

"I have no idea! I mean that, of course, is my hope too," Harbour admitted to ET in regards to Hopper being the "American" prisoner in question. "It seems pretty crazy though."

Indeed, it would be interesting to discover just how Hopper was able to get out of that situation alive, given how everyone else in reach of the blast died instantly. You'd think no one would be able to survive something like that, however, stranger things have been known to happen on, well, Stranger Things. So anything is possible.

In fact, Reddit user tierfonyellowaces noticed a tiny detail in the Stranger Things 3 finale that could make all the difference and explain everything. There appears to be a ladder on the side of the big laser machine that Hopper was on right before the explosion. Perhaps he noticed the ladder in time and was able to get out of harm's way just before Joyce turned those keys.

For his part, though, Harbour claims to be just as in the dark as fans are in regards to what happens next for his character. Harbour insists that the Duffer Brothers have shared "nothing" with him about Hopper's involvement in a potential Season 4.

"They've been dodging me for days, so I know nothing!" the actor stated in the same ET interview, adding:

"I know as much as you. I've seen the final episode – it’s extraordinary, it’s magnificent. What Hopper does and what happens to him – he acts like the person he is meant to be. And then there is this mystery at the end. I don't really know what’s going to happen, but if you find out from the Duffer Brothers, let me know and have them return my calls!"

Either way, Harbour wants to assure fans that there's still some hope out there for Hopper and to not give up on his return just yet. "I mean, we should always hold onto hope. We should never let go of hope," he said, before adding "But Barb is really dead."

There may never be any justice for Barb, but after Harbour's remarks there still seems to be some hope for Hopper.