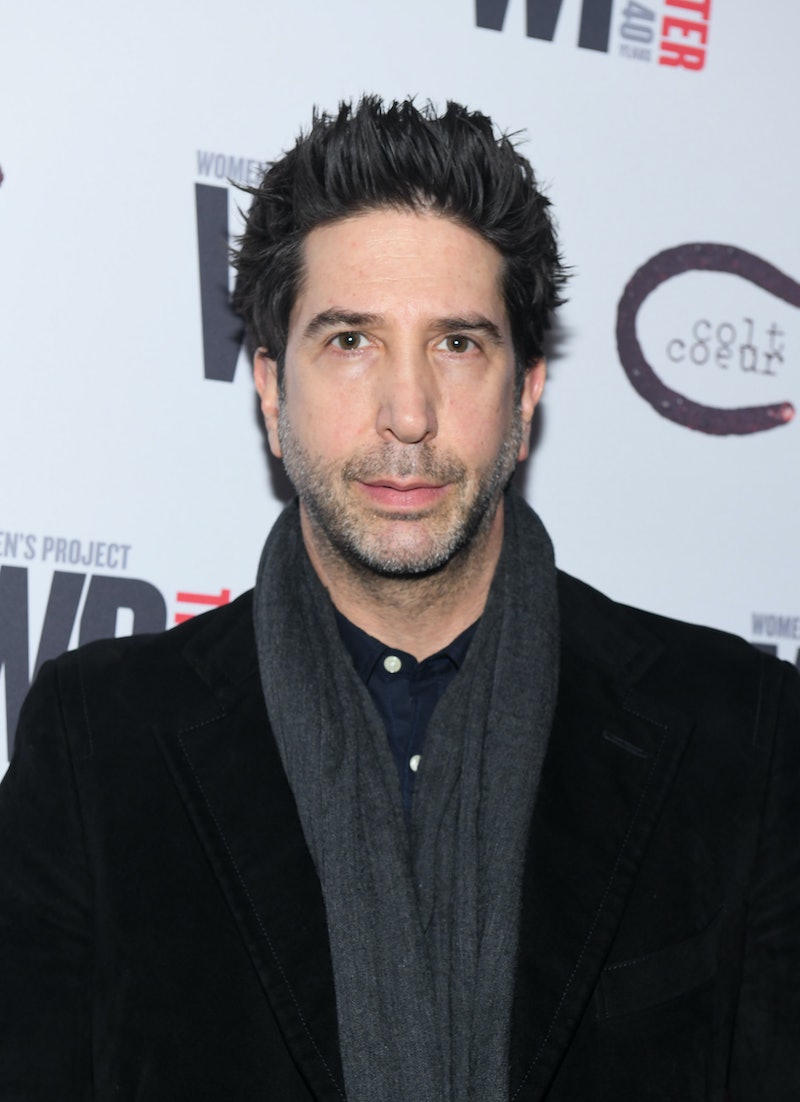 Friends may be beloved, but even the most passionate fan will admit that parts of the show haven't aged well. Still, the actor who played Ross Geller disagrees: In a Jan. 26 interview with The Guardian, David Schwimmer dismissed Friends criticism by saying that "little is taken in context" when the show is called problematic, specifically where diversity is involved.

In the interview, Schwimmer said that Friends was groundbreaking for its time, citing storylines like Ross' wife Susan coming out as a lesbian, and her onscreen wedding to her wife, Carol, as examples of its '90s era progressiveness. "You have to look at it from the point of view of what the show was trying to do at the time," he said. "I'm the first person to say that maybe something was inappropriate or insensitive, but I feel like my barometer was pretty good at that time. I was already really attuned to social issues and issues of equality."

The actor went on to say that he advocated for more diversity on the show by pushing for Ross to date women of color. "Maybe there should be an all-black Friends or an all-Asian Friends," he added. (Technically, there was already an all-black Friends: as Queen Latifah pointed out on The Late Late Show with James Corden in 2016, Living Single was reportedly one of the shows that inspired the NBC sitcom.)

Schwimmer isn't the first actor from the show to get defensive about the criticism directed at Friends. In 2018, Matt LeBlanc, who played Joey, told the Independent, "I've heard those rumors too about people taking pot shots at Friends, but I don't want to get into that. I disagree with all that." He went on to say that the series tackled themes that "stand the test of time."

Both actors' comments seem to suggest that acknowledging the problematic aspects of Friends in some way diminishes its legacy. However, the truth is far more complex. Friends is a product of its time, as Schwimmer pointed out, but it's only natural for modern viewers to discuss the problematic aspects of the show (its transphobia, fatphobia, and lack of inclusivity) alongside the areas where it succeeded (the cast's chemistry and found family themes). The truth is, Friends was never perfect — but before the internet, it was harder to discuss the ways in which the show could have handled social issues better.

In a Feb. 2019 interview with The Guardian, Aisha Tyler, one of the only women of color to have a significant role in the comedy, shared that Friends' nearly all-white version of Manhattan was always a topic of discussion. "People of color were always aware of it [the lack of diversity]," she told the outlet. "Even at the time, people were constantly pointing out that Friends wasn't as diverse as the Manhattan of the real world."

As Schwimmer noted, Friends "was groundbreaking in its time," but that doesn't mean fans shouldn't continue to discuss its problematic elements alongside its achievements. The discussions don't make Friends any less iconic, they simply acknowledge that in this era, people expect more when it comes to inclusive, progressive storytelling.