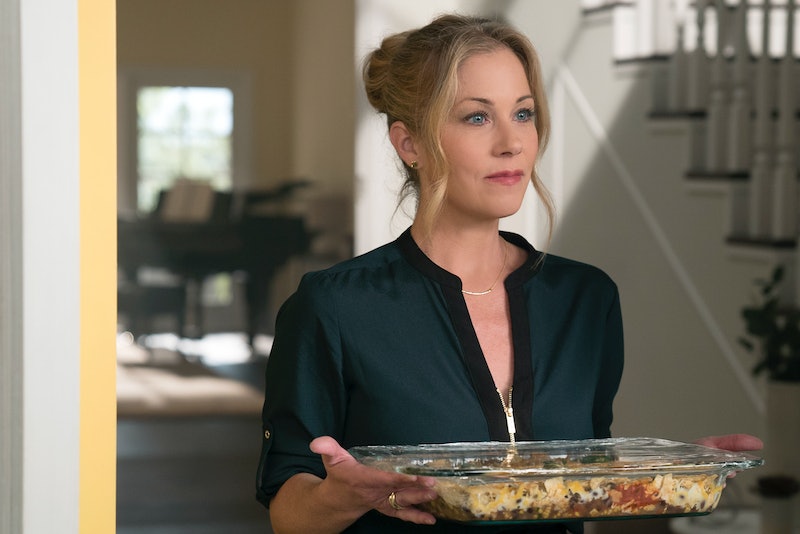 Mild spoilers for Season 1 of Dead to Me ahead. Given that Dead to Me is a dark comedy about dealing with grief, it shouldn't be a surprise that it's filled with dramatic and emotional moments. But the most dramatic and emotional moment of the first season actually comes as quite the surprise, as Jen (Christina Applegate) reveals to her new best friend Judy (Linda Cardellini) that the reason she had been having issues with her husband before his death was because he didn't want to sleep with her anymore after she had a double mastectomy. Jen completely breaks down as she lays her most humiliating secret bare, and suddenly, all her rage makes sense as a complete picture of what happened to her marriage emerges.

That powerful confession from Jen carries even more weight than viewers may realize. After being diagnosed with breast cancer in 2008, Applegate herself had a double mastectomy. Having her onscreen character go through that same process was more than just art imitating life: Applegate asked to add that detail into Dead to Me.

"I wanted it there so I called up [showrunner] Liz [Feldman] and I said, 'What would you say to this? That this was something that might have affected their relationship?'" Applegate tells Bustle. "We talked about it and within a couple hours she was like, 'It's going to be in the show.' I was like, 'Okay, I'm ready to go there.'"

Breast cancer effects one in eight women, according to breastcancer.org. And yet Applegate hadn't seen a character on TV or in movies go through what she went through in real life during her own breast cancer fight.

"I know that after I had been sick, I went through a period of time out there in the world like, 'This is going to be so good," she says. "Then the noise stops and you're faced with this thing, and I wanted to talk to women out there and be like, 'It's okay that you feel this way. It's okay not to have to always be a survivor.' You can go, 'You know what? This really sucked.' I thought it was an interesting thing to explore and it was good for me to have these moments."

While Applegate pushed to include that personal storyline for Jen, it wasn't until she filmed that emotional breakdown scene with Judy that she realized just how important it really was to her.

"That scene, for both of us, was a marathon of a night," Applegate says. "It was not one take. It was multiple, multiple, multiple takes of a very, very long, long, very involved scene. Every time I started to say those words I just lost it. It was good to do. It felt freeing to do that and talk about it in that capacity. For hours, I was just letting it all go. That was a gift."

By showing the reality of what it means to go through something as life-changing as a double mastectomy and how the consequences are not always pretty or empowering, Applegate hopes to connect with other women who have gone through the same thing. She wants other women to know that it's OK to feel like you're not always a superhero after what you've gone through.

"You're alive," she says emphatically. "That's what I tell myself all the time: that I'm alive." She wants women to relate to Jen, and understand why Jen is the way she is. "Up to that point, you're like, 'Why is this b*tch so angry? What's going on underneath all of it?' That's it."

Jen's husband rejecting her for months after her surgery before he was killed in a hit and run took a toll. She became filled with anger and impatience and took it out on those around her. It only became worse when he died before they could hash out their issues. And the revelation that he had been cheating on Jen, which she discovers after his death, complicates things further.

Just as Jen finds release in opening up to Judy, Applegate has found her release in portraying Jen's journey on Dead to Me. "We cried pretty much every day," she says. "We had releases every day."

Hopefully, Dead to Me can provide that same catharsis for viewers as well, no matter what they're going through.