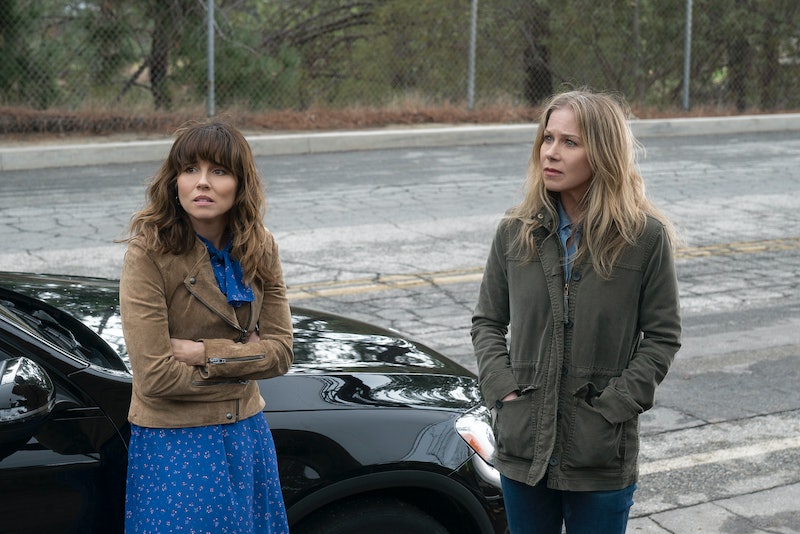 If you watched Netflix's Dead to Me, chances are, you devoured it in one sitting. The twisty, engrossing dramedy that came out in May left off on a cliffhanger at the end of Season 1, so on Monday night when the show's official Twitter account announced that Dead to Me was renewed for Season 2, fans celebrated the knowledge that they might actually get answers with GIFs from the show. The late night Twitter announcement didn't give any details about when Season 2 will hit Netflix, and People confirmed that the premiere date has not been released, but seeing as it probably won't be tomorrow, it will probably feel like way too long to the fans waiting with bated breath.

Dead to Me follows Jen (Christina Applegate) as she attempts to return to normalcy after her husband's untimely death. But Jen lands far from normal when she meets an enthusiastic Judy (Linda Cardellini) who has a few dark secrets that get revealed as Season 1 unfolds. Without giving any spoilers away, the ending of Season 1 presented a surprising twist that will likely have major consequences in Season 2. Due to that pivotal ending, a second season seemed inevitable, and, as People reported, the show's creator creator Liz Feldman had previously teased a second season in an interview with Entertainment Weekly.

Even if a Season 2 seemed necessary, you never really know if Netflix will actually do the right thing by its shows' story lines, so the renewal news really is worth celebrating for fans of the show.

In her interview with EW, Feldman hinted at what's to come in Season 2, saying, "It will be about the further exploration of this friendship, and relationship, and now very complicated dynamic, or even more complicated dynamic between these two women." Just because things are getting complicated doesn't mean the two leads will be splitting up anytime soon, as Feldman also assured fans that Jen and Judy are stuck with each other, no matter what. "But in the most basic way, the score has been evened," the creator continued. "What I wanted to do was create a situation where they’re forced together, and they need each other now in some ways more than they did at the beginning of Season 1."

That Dead to Me plans to further explore the relationship between Jen and Judy, which went through so many changes in Season 1, will likely please fans considering that the two main character's dynamic is so intriguing. Applegate and Cardellini have electric chemistry and their characters are so complex — not to mention funny — that it makes for a compelling story. As for what the show is about, it's almost impossible to describe without giving away spoilers.

That said, even if we were to give away spoilers, there would still be a lot of unanswered questions, specifically about what happened in the Season 1 finale. As EW pointed out in their interview with Feldman, audiences didn't get to see all of the action of the big twist, rather, they saw the results. Feldman confirmed that the finale events were meant to keep some things hidden from the audience, saying, "One thing I can tell you is that everything is deliberate."

With such a sly series creator tasked with following up that Season 1 cliffhanger, it seems like Dead to Me fans have some big twists ahead of them to look forward to. Hopefully Season 2 will come out before you know it.