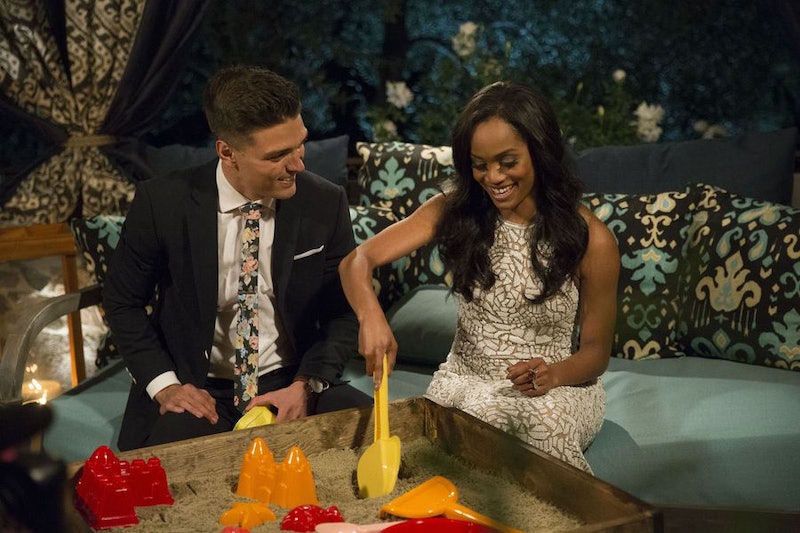 It's impossible to watch this season of The Bachelorette without falling in love with Dean Unglert. Whether it's his precious face, his sweet smile, or his sense of humor, it's hard for fans not to crush on him... and after Monday night, it seems like that crush is only going to grow. In a preview for the new episode, Dean asks Rachel awkward questions on The Bachelorette, and even though she gets a little irritated by him in the process, it definitely seems to be proof that he's starting to have real feelings for her.

The clip comes from the potential couple's second one-on-one date, which is going to have to be pretty epic to top their first one, what with the blimps and all. Dean and Rachel are chatting, trying to get to know each other better, and Rachel tells him he can feel free to ask her anything he wants to know about her. So of course, Dean immediately wants to know if she believes in the tooth fairy.

Rachel's a little put off by his question, and gives him a second chance. So what does he do when she wants him to get serious? In true Dean fashion, he then asks her what her favorite dinosaur is.

Since Rachel is so hyper-focused on making the most of the one-on-one time she has with Dean, she seems pretty annoyed that he isn't asking her deeper questions. And as for Dean? He's just a flurry of nervous laughter.

She's totally right — the contestants do get so little time with Rachel that it could make it hard for her to decide who the right match for her could be. It's understandable that she'd want to use that time to get down to business and find out where Dean is at on the important issues, like kids and where they should live and what he imagines their future will look like. A lot of people would be frustrated by the way that Dean doesn't seem to be taking it seriously.

But Dean avoiding those kind of questions doesn't necessarily mean that The Bachelorette is a joke to him — actually, it could mean the opposite. Like he admitted to Rachel in the clip, he does feel a lot of pressure being on a second one-on-one date with her, and his laughter and weird questions could just mean that he's feeling especially awkward because he does have real feelings for Rachel. Hopefully, she'll realize that herself and let him prove himself to her, or else she'll be missing out on a really great guy.

If things don't work out between them, though, maybe Dean can be the next Bachelor? A whole season of those giggles and dinosaur talk sounds pretty good.