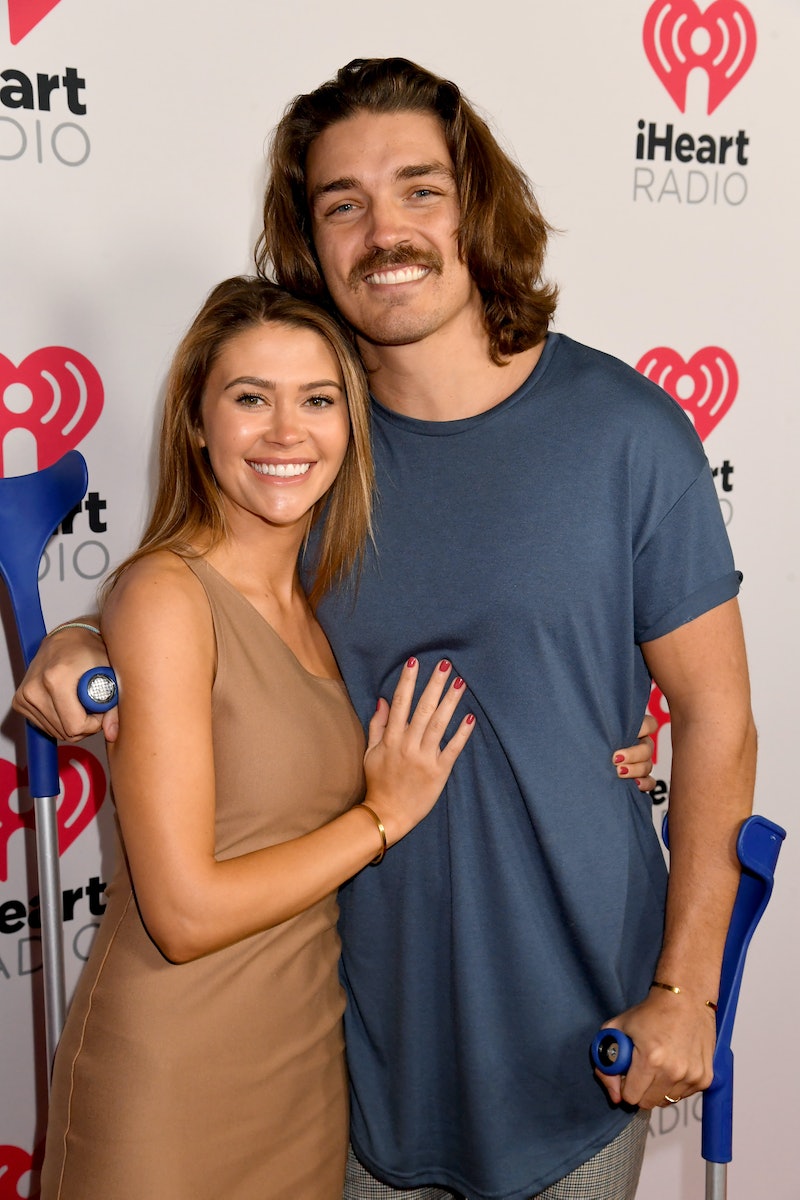 The world may be currently facing a global pandemic, but that isn't preventing Bachelor Nation from trying to find out once and for all whether or not the marriage rumors about Dean Unglert and Caelynn Miller-Keyes are actually true. But if you were hoping to get answers from the van man himself, then be prepared for disappointment. While hosting a new episode of his Help! I Suck at Dating podcast on Monday, March 30, as per E! News, Dean continued to play coy about the whole situation, particularly when it comes to a certain accessory that he's taken to wearing on his left hand.

The subject was broached after one listener inquired about the ring in question, which prompted Dean's fellow host and Bachelor alum Jared Haibon to ask if Caelynn had given Dean the piece of jewelry to serve as a reminder to others that he's taken. "It's just a constant reminder for me, too," Dean replied. "You know, if it wasn't as big as it is, I'd probably miss it every once in a while." He then noted that Caelynn wears a lot of rings on her hand as well, including one on her ring finger. But when pressed if the round trinket was meant to symbolize anything in regards to their commitment to each other, Dean told Jared that he'd have to ask Caelynn. A classic avoidance tactic if there ever was one.

But if you think fans are the only ones fed up with Dean's evasiveness, think again. "Why are you guys playing it so coy?" Jared asked Dean, speaking for all of Bachelor Nation. "Like, I get more questions about your marriage than I do about mine and nobody even knows if you're married." But even then, Dean refused to budge or give any sort of concrete response. "Yeah, that's weird. I wish I could answer that but it's not my place," he replied. "It's kind of Caelynn's thing."

Wedding rumors about Dean and Caelynn went into overdrive back in February after the duo seemed to hint that they had tied the knot on Instagram. The speculation began on Valentine's Day after Caelynn posted a sweet tribute to Dean on her social media account. "Life is so much better with you in it. Happy Valentine's Day," Caelynn captioned the post, which prompted one follower to tell the duo to "get married." But it was Caelynn's response that really raised a few eyebrows, writing back, "already did." She also went on to describe one of their trips as "the best honeymoon ever," though neither of them have confirmed the rumors outright.

So is this legit marriage or are they just trolling fans for their own amusement? Either scenario is possible at this point. And since neither of them seem to want to admit to anything anytime soon, we may continue to be in the dark about this whole thing for quite some time.