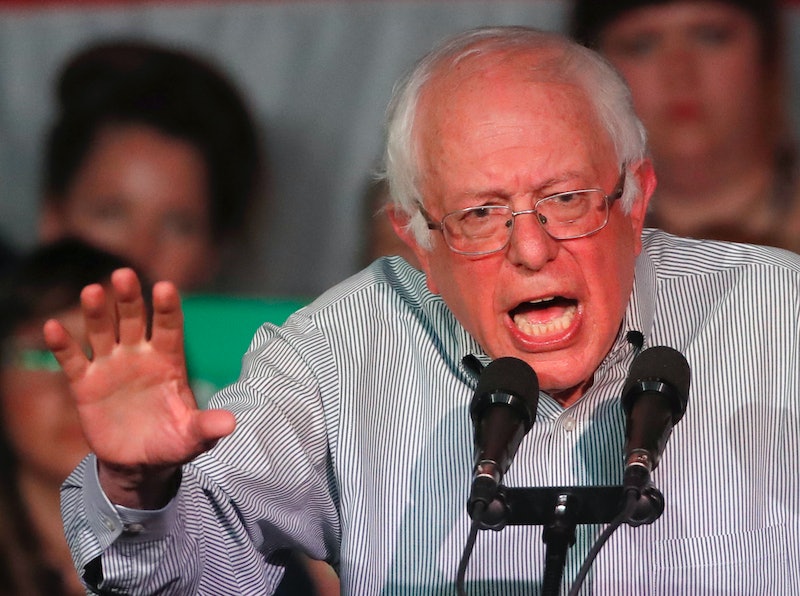 Few things in 2017 have surprised me less than the news that Bernie Sanders supported an anti-choice candidate for mayor of Omaha, Nebraska. Last week, Sanders traveled to Omaha to campaign for Heath Mello, a man who supported measures, like a 20-week abortion ban and mandating women be offered the chance to have ultrasounds before they have abortions. When criticized for his support of Mello on CBS' Face The Nation, Sanders stood by his decision, saying:

[I]f you have a rally in which you have the labor movement and the environmentalists and Native Americans and the African-American community and the Latino community coming together, saying, we want this guy to become our next mayor, should I reject going there to Omaha? I don't think so. It was a great rally, and I hope very much he wins.

While some people are outraged, Sanders' move hardly shocks me. As "progressive" as Sanders proclaims himself to be, he has not particularly made reproductive rights a centerpiece of his agenda. When Planned Parenthood and NARAL Pro-Choice America endorsed his opponent, Hillary Clinton, during the presidential primaries, Sanders wrote them off as part of his much-despised "establishment," an odd characterization for two groups whose very existences are perennially under attack.

Yet during the primary, Sanders supporters fell over themselves to assure me that he, not Clinton, was the true champion for women. Shiva Bayat wrote in Slate how she and other millennial feminists had "a hard time rallying behind Hillary because we see her as a part of a political elite that has done the utmost psychological, environmental, and economic damage to this country."

I personally had some negative encounters with Bernie Bros, the subset of Sanders supporters who became notorious for their condescension and latent sexism. Men I otherwise liked and respected, to paraphrase Sarah Lerner's viral essay, were suddenly eager to explain to me how I was blind if I didn't see that Sanders would usher in a utopia for women — and that no other alternative would suffice.

I have a degree in political science, but from their tone, you'd have thought I was just learning about the concept of government for the very first time.

"You might not realize this," one male acquaintance said to me, "but women's healthcare is actually a lot more expensive than men's." "Abortion is just a rich white women's issue," said another male friend. This, for the record, isn't even a little bit true — when reproductive rights are taken away, low-income women of color are among the most affected.

Sen. Sanders has argued that Democrats have lost touch with people who share his working class roots. But working class women are the ones who rely on Planned Parenthood the most, and a candidate who claims to fight for them must also fight for their right to choose.

I think what they were trying to communicate, however patronizingly, is that access to affordable healthcare is one of the most important issues in modern politics, for women and men alike. This is true. It's why I supported a candidate who has made affordable healthcare her life's work. But the Bernie Bros I spoke with missed just how critical abortion access (far from being just a "rich white lady issue") is for women's health.

Women who cannot access safe abortion care may try dangerous methods to induce abortion — and without medical supervision, these methods can result in death. Women who are denied abortion access also incur enormous medical costs for pregnancy and childbirth, something that perpetuates the cycle of poverty among women and families.

Sanders has argued that Democrats have lost touch with people who share his working class roots. But working class women are the ones who rely on Planned Parenthood the most, and a candidate who claims to fight for them must also fight for their right to choose.

The Omaha mayoral candidate that he so enthusiastically supports has been a determined anti-choice activist. In the Nebraska state legislature, Mello sponsored a 20-week abortion ban, based on scientifically debunked beliefs about fetal pain, and has enjoyed the endorsement of Nebraska Right to Life.