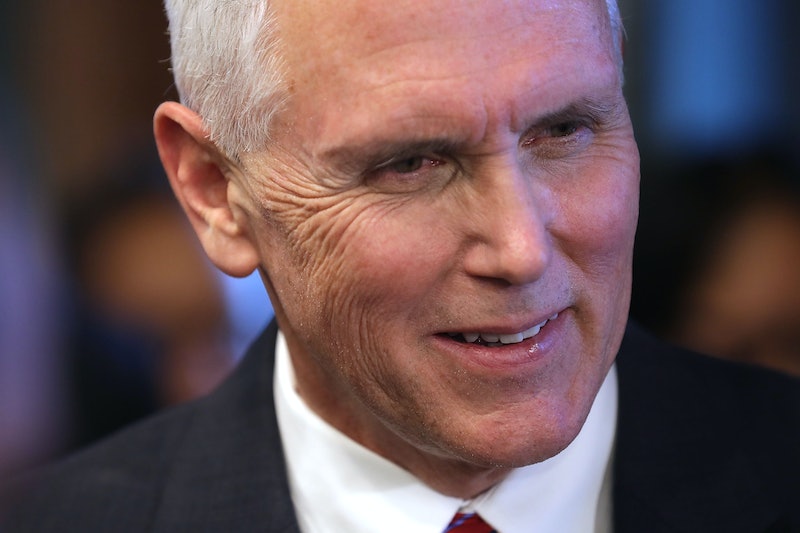 Fighting climate change may be the biggest challenge of the 21st century, but according to Vice President Mike Pence, it's all part of the "liberal left" agenda. While defending President Trump's decision to withdraw from the Paris climate accord in an interview with Fox & Friends on Friday, Pence appeared confused about why climate change is "a paramount issue" for the left, incorrectly framing it as a political argument rather than a scientific fact.

Pence also defended the decision to pull out of the Paris agreement by echoing Trump's argument that it "was a bad deal for America."

Pence is right in that Democrats have made combating climate change a part of their party platform, but they're hardly the only ones to make climate change a paramount issue. While some conservative Republicans like Pence have bemoaned climate change as a liberal hoax, the United Nations, NASA, numerous scientific organizations, and 97 percent of climate scientists agree that climate change is a very real threat and that human activity is contributing to global warming.

As a result of the overwhelming data supporting the existence of climate change, a recent study from the Yale Program on Climate Change Communication found "a majority of Americans in every state" wanted the United States to participate in the Paris climate accord. (Hear that Mr. Pence? A majority of Americans.) Moreover, there's a number of reasons as to why climate change is a paramount issue for not just the left but, well, everybody.

A 2013 report from the Intergovernmental Panel on Climate Change found human activity had driven the earth's average surface temperature up 0.8 degrees Celsius over the last century. They predicted that further human activity — specifically the release of greenhouse gases — could cause temperatures to rise another 2 degrees Celsius by the end of 2100. According to experts, that increase, though seemingly minor, could result in more extreme droughts, hurricanes, heat waves, and increase the risk of coastal flooding, famine, and even the extinction of some plant and animal species.

Scientists have recorded a number of ways climate change has impacted the world already, including melting glaciers, rising sea levels, reduced sea ice in the Arctic, longer and more frequent heat waves, and substantially higher temperatures on every continent. And if the world fails to act on climate change, experts say things will only get worse.

As absurd as Pence's comments are, it's incredibly problematic that the vice president is dismissing the seriousness of global warming by characterizing climate change as merely a fringe issue of the liberal left. Instead of playing politics with climate change, Pence would do well to recognize that neither Earth nor the environment cares about what political party you belong to.