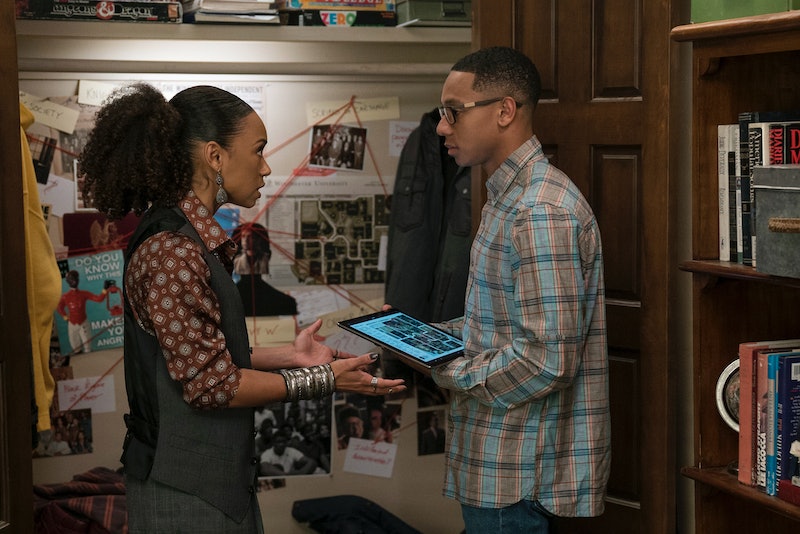 Spoilers ahead for the Dear White People Season 2 finale.

Peaceful protests, secret societies, long-awaited hook-ups... Dear White People Season 2 has it all. But a shocking plot twist in the final moments of the Season 2 finale really takes the cake as this season's wildest moment. The series' narrator (voiced by Giancarlo Esposito) walked out of the shadows and into the show's mythology as a real flesh-and-blood character who's the leader of Winchester's black secret society The Order. This mystery man who had always been heard but never seen on the show successfully recruited Sam (Logan Browning) and Lionel (DeRon Hurton) thanks to their loud and determined support and protection for Armstrong-Parker's black student body.

Retconning the very idea of what role the narrator plays in Dear White People upends the entire Netflix series, and moving forward there's no way of knowing what this means for the show's future. Speaking with Bustle, Dear White People creator Justin Simien reveals that this plot twist is on par with everything they've done on the show prior, since his mission is always "try to surprise the viewer."

"From the movie, the spirit of, 'It's not what you think it is,' has always been pervasive in the world of Dear White People," Simien says. "Having a narrator in the TV show is one of those conventions that a lot of people do, but I just wanted to take it to another level. I wanted it to have a narrative purpose and sophistication that was above and beyond someone just telling us things that we need to know."

But the finale twist was also born out of Simien's love and respect for Esposito as a character actor. "Finding a way for Giancarlo, his face, his presence, to have a place within our story was always something that was on my mind since we were able to get him as a narrator in Season 1," Simien says. "There are a lot of thoughts in terms of what it all will mean for next season, for the characters, but for now I'll just say it's certainly a door I wanted to open."

The idea of blowing up the narrative structure of the series heading into Season 3 is exactly what Simien wants to do every season. Laughing at how easily he gets "bored" with the ideas and themes he did in previous seasons, he says he realized early on that this twist would give him a fresh perspective on what Dear White People can be.

"Introducing the narrator as a character gives me a kind of freedom with what I can do with that character moving forward," Simien adds. "I'm not bound by my own format season to season, and I certainly like that. And I think it's also one hell of a plot twist and cliffhanger."

So far, all that is known about Esposito's narrator is that he is a real person who has been pulling the strings behind-the-scenes for the entire series. He is in a leadership position of secret society The Order, and he's been watching Sam and Lionel for some time now. His name and motivations are not known yet, but executive producer Yvette Lee Bowser assures Bustle we'll find out more in Season 3.

"Part of this season was dealing with the idea of [needing] a hero, [that] there is something greater than ourselves and hopefully someone will help us because we're really flailing on our own and we're without direction," Bowser says. "Now we see there is someone who has been watching who is maybe going to facilitate a better approach for them. We'll find out exactly who he is and what else he has going on in subsequent seasons."

For his part, Simien is extremely excited to see where he can take Dear White People moving forward with Esposito's narrator now being a part of the story. With the narrative structure "certainly changing" as a result, he hasn't yet decided how that will look.

"But it changes your relationship to that narrator," he says. "The second you have an idea of who it is behind the voice, you start to realize there are points of views that have come into play. This isn't just a straight stating of the facts. This is a person with an agenda. There is no way that it doesn't change completely. It's rather exciting to feel like my format has already, to a degree, exploded or imploded because it means that Season 3, we get to do even more fresh things and come up with new ways to format the show and to use this character. That's the most exciting thing to me about future seasons of Dear White People, getting to subvert expectations."

Another Season 2 surprise was the cameo from original Dear White People star Tessa Thompson. The in-demand actress, now a major part of the Marvel Cinematic Universe, found time in her busy schedule to make a surprise appearance as a new character (she played Sam in the Dear White People movie upon which the Netflix series is based). In her scenes, she went head-to-head with Sam as a conservative political figure, and seeing both of the Sams share the screen together was a trippy moment that felt earned.

"It was always my desire to have [Thompson] be a part of the original show along with all of the original cast members," Simien says. "If not as their characters, then still as somebody. It was really an extension of ongoing conversations that she and I had had, trying to sniff out her availability for this season." But the character she ended up playing was different than Simien's initial idea for how he wanted to include Thompson in the series.

"I ended up writing this character and this dream scene between Sam and a kind of alter ego version of her, this doppelgänger version of her that Tessa plays," he says. "We kept pushing to make that scene happen and have a narrative purpose and work with her schedule."

While the scene ultimately didn't happen that way, having Thompson finally make a cameo as an opponent of Sam's was still a dream come true for Simien. "The show is very meta and self-aware and this is another one of those ways in which we get to use the history of the show and its different casts to support what it is we're trying to say," he adds. Now all that's needed is for Netflix to renew the series for Season 3 so fans can finally crack open the narrator mystery.