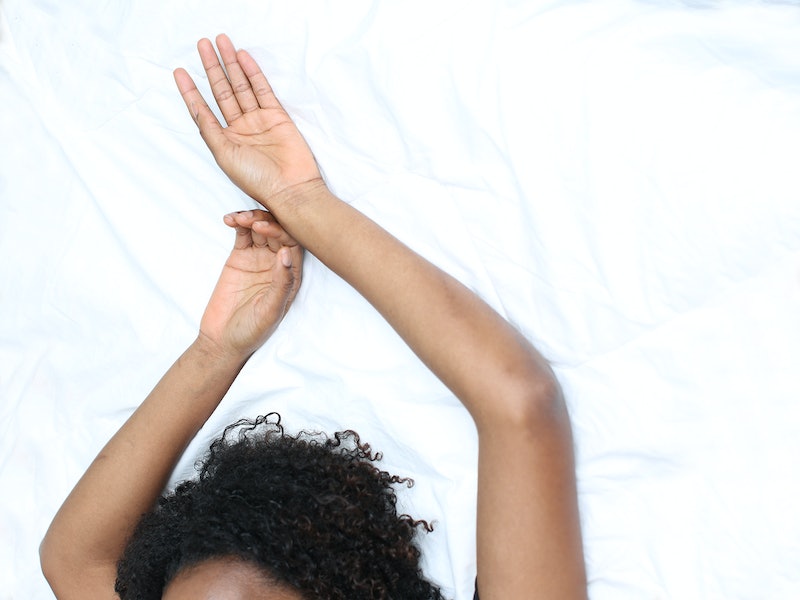 I'm not superstitious, but déjà vu will always thoroughly creep me out. I hate that eerie feeling that I'm experiencing something familiar, especially because I can never place it. If you feel like you can predict what's going to happen next when you're experiencing déjà vu, you aren't alone: Déjà vu can make you feel like you're psychic, but a new study from researchers at Colorado State University says — surprise — it doesn't actually give you any fortune-telling abilities. The study, conducted by cognitive psychologist Anne Cleary, recreated déjà vu through virtual reality tests that were spatially similar, which induced a feeling of familiarity. More than half of participants felt like they knew the right answer when asked which way to turn because of déjà vu.

But, according to a CSU article about the study, the participants "were no more likely to actually recall the correct answer — the turn they had previously seen in a spatially mapped, different scene — than if they were to choose randomly. In other words, participants who had the feeling of prediction were pretty confident they were right, but they usually weren’t." Essentially, if you've ever felt like déjà vu gave you the ability to predict the future, you're in good company — but you aren't any more likely to guess things than someone without the eerie feeling.

In Cleary's research, she's found that déjà vu isn't as spooky as we think it is. It's a memory phenomenon similar to having a word at the tip of your tongue but not being able to recall it or seeing someone's face and being unable to place why they look familiar. But according to the CSU article, she's gotten pushback from people convinced that déjà vu is different.

"Since she began publicizing her results about déjà vu as a memory phenomenon more than 10 years ago, people around the world started responding," the article's author, Anne Manning, writes. "You’re wrong, they argued. It’s not just a memory. I also feel that I know what’s going to happen next."

Why are people convinced that they're having a supernatural experience when they experience déjà vu? Cleary has some theories, even though she says she's never experienced the psychic feeling that sometimes accompanies déjà vu.

“I think the reason people come up with psychic theories about déjà vu is that they are these mysterious, subjective experiences,” she said in the CSU article. “Even scientists who don’t believe in past lives have whispered to me, ‘Do you have an explanation for why I have this?’ People look for explanations in different places. If you’re a scientist, you’re looking for the logical reason for why you just had this really weird experience.”

Cleary is working on follow-up research to figure out why people are convinced that they can predict the future when experiencing déjà vu. One possibility, per the CSU article, is that people are having hindsight bias — which, according to Psychology Today, is a phenomenon that causes you to say, "I knew it!" after something surprising happens, even if you didn't accurately predict the outcome. Cleary's team is also investigating whether the feeling of familiarity leads us to believe we can tell the future.

I get creeped out easily, so it's not like I was excited at the thought of being able to predict what would happen next in my life, but I'm also a bit disappointed. There's a bit of mystery that accompanies that déjà vu feeling, and it's hard to resist. Even though scientists are saying there isn't anything to be spooked by, I don't blame you if you continue to look at déjà vu as something otherworldly — it's a lot more fun that way.

More like this
What Is The Forest Personality Test? The TikTok Trend, Explained
By Georgina Lawton
This Creepy TikTok Trend Encourages Out-Of-Body Experiences
By Kaitlyn Wylde
I Tried The $20 TikTok Viral Oishii Strawberries — Here's What I Thought
By Sophie Hanson
Trust Me, Pickle Martinis Are The New It Drink Of The Season
By Emma Carey
Get Even More From Bustle — Sign Up For The Newsletter