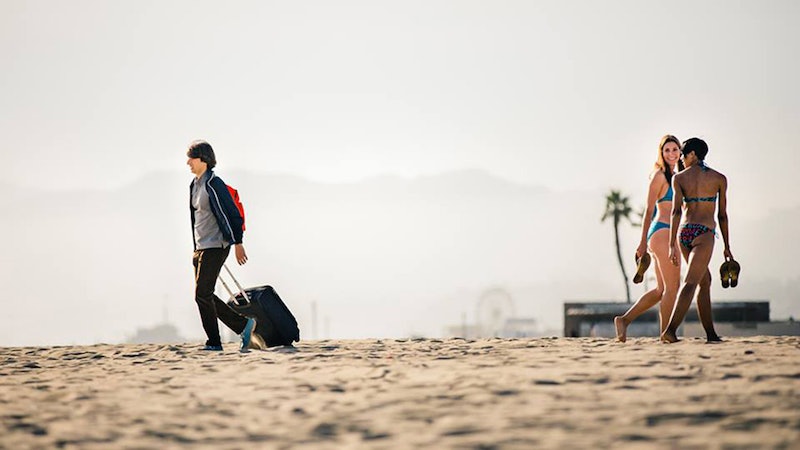 Comedy is often described as tragedy plus time, but for one comedian, no amount of time would have made his life story work for comedy. So instead of trying to make it funny, stand-up comedian Demetri Martin decided to lean fully into drama when it came to his film debut Dean, a movie about a father and son coming to terms with grief, loss and moving on after losing someone they love.

Martin stars as the titular Dean, an illustrator from New York dealing with the recent death of his mother by pushing away his father Robert (Kevin Kline). When an interview opportunity arises in Los Angeles, he jumps at the chance to escape the struggles of his east coast reality while his dad tries to grieve by putting the family home up for sale. The story of father and son attempting to move forward on their own individual paths reaches a fascinating emotional depth as potential new love interests actually make their journeys more similar than they'd like to think.

The project, which won the top prize at the Tribeca Film Festival, is a first on many fronts for Martin. It's his first feature film, and his first time directing, writing and producing. And now, with CBS Films releasing Dean in select theaters on Friday, June 2, it will be the first time his passion project will be released theatrically. Martin appears calm as he sits down across from me in a conference room at CBS Films offices, but it's clear that he's feeling the pressure of a first-time director/producer/writer.

"I bit off way more than I could chew," Martin tells me as he eats his lunch. "It was legitimately super difficult but I'm so glad to be at this stage of it. You make an indie and you don't know if the script is even going to get actors who want to be in it and then are you going to get the finance, the whole thing. And then you finally get the whole movie shot, and you're like, 'Can I make this a good movie?' To get a theatrical release, I'm just over the moon and a little bit apprehensive."

With so many firsts, Martin was surprised that producing was actually the hardest hat to try on.

"You see that word 'producer' and that's so vague," he says. "There are so many different kinds of producers. But when it comes to the practical, day-to-day, I had producers but I had to do a lot of stuff myself. I was inexperienced so things like not having a location tomorrow but still having to shoot tomorrow, because we only had enough money to shoot for 20 days, and our locations manager dropped out and got a job on a studio thing, so I was shooting scenes and trying to be present and give some sort of a performance here, but now the producer in me is like, 'What are we going to do tomorrow?' That stuff kept me up at night. That was a nightmare."

As for directing, that was something Martin extremely enjoyed getting to try out and hopes to do it again.

"Telling your story that way is so great," he says of directing. "I got to play with it and there were so many options and that was great. Acting is never easy because I'm not a trained actor, but I'm staying in my range in this. But the producing part was the most daunting. I certainly learned a lot more than I thought I would. You never know what you don't know. I understand what that means now."

Martin is the first to admit that Dean is "semi-autobiographical" because while it's his life story, there are certainly big liberties he's taking with the script and characters.

"It's autobiographical which is probably not a surprise because a lot of first time filmmakers pull from their own experience. But it's fictional," Martin says. "In my real life, my dad passed away when I was 20 and he was young, only 46. My mom was 41 at the time and I was a junior in college, so it was terrible. My family still hasn't really recovered in some ways. It just changes everything."

Making the change from the title character losing his father to losing his mother came a desire to tell a different kind of story.

"In real life, I did lose my father," Martin says. "I wanted to have this parallel story between a father and son both being single at the same time because that was my real experience watching my mom try and get back out there. I wanted to have their journeys side by side but not connected enough to show this guy thing of failing to communicate with each other. They don't even know that they're going through the same thing."

He continues, "We get to see their parallel journeys but they don't know until hopefully the end of the movie. The second reason which is the more humbling one is that I'm still learning how to write for other people and I think it's hard to write for women if you're not a woman. I think it's possible and some people do it very well and I think it's great that women write as much as they do because it's their story but I have so much to learn about writing for women, especially one that's not my age."

While he's never been able to tell the story of the biggest moment in his life before now because it just didn't work with his stand-up and brand of comedy, he's excited to finally explore the emotional journey he went through onscreen in Dean.

"As big of an impact that that's had on my life, that's not something I got into comedy to talk about, you know? I like jokes, wordplay, making short stories and comedy," he says. "Somewhere along the way, I left aside my own personal, observational experience, and I wanted to share it now. When I thought about trying to make a film, it just felt like I needed to dig deep and talk about something that comes more from feeling and less from thinking. The biggest thing that had happened to me was losing my dad, certainly when it came to things that didn't have a solution, where there's no answer."

According to Martin, the original title for the film when he was writing the script was The First Thing That You Never Get Over, but he decided to change it to something more personal.

"I changed it to Dean because that was my dad's name and that's who I named my character after," he says. "For me, the first thing I never got over was losing my dad, and I know I'm lucky. I got to go from zero to age 20 without having anything like that. Other people are less lucky and they lose a parent when they're seven or they get abused as a child or their parents divorce when they're 12. There's always one thing that changes your life forever. It doesn't mean I'm grieving for the rest of my life but it does mean I'm a different person before and after that. It's a coming-of-age story told in a new way. That was part of my intention."

When Dean won the top prize at Tribeca this past year, Martin was blown away. In fact, he didn't expect to win anything at the festival, so he left before the winners were announced.

"That was such a genuine surprise," he says with a smile. "When they announced the prizes I was literally about to get in the car to do another gig, and I had to make a video on my phone to say thanks. And I was so touched in the first screenings, when the credits said I did the drawings, people actually clapped. Listen, I know what my drawings look like but I put so much work into my drawings to communicate something real so that made me feel really good."

However, no matter how much Martin is proud of in his first movie, there is something he regrets.

"What was important to me and I failed at it was that I tried to pass the Bechdel Test," he says, looking down at his hands. "I did in an earlier cut of the movie. There was a scene with Nicky [Gillian Jacobs] and Jill [Ginger Gonzaga] and it's while I'm talking to Eric [Rory Scovel] and saying goodbye to him at the airport, and the women are in the car. I had this counterpart where we are talking about his cat and all this emotional stuff with him breaking down, the stereotypically feminine conversation that was emotional, and then in the car I had the women talking this 'dude' conversation where they were like talking about bulls-t, joking around, and it passed the test."

He pauses to breath deeply, and continues, "There were two women talking not about a guy or love. I was really proud of that, but the movie was too long so that was a loss. In my next film, I hope I do pass that test."

If Martin is at least conscious of the Bechdel Test, he's on the right path. And based on the critical reception of Dean, he'll have many more chances to get it right.