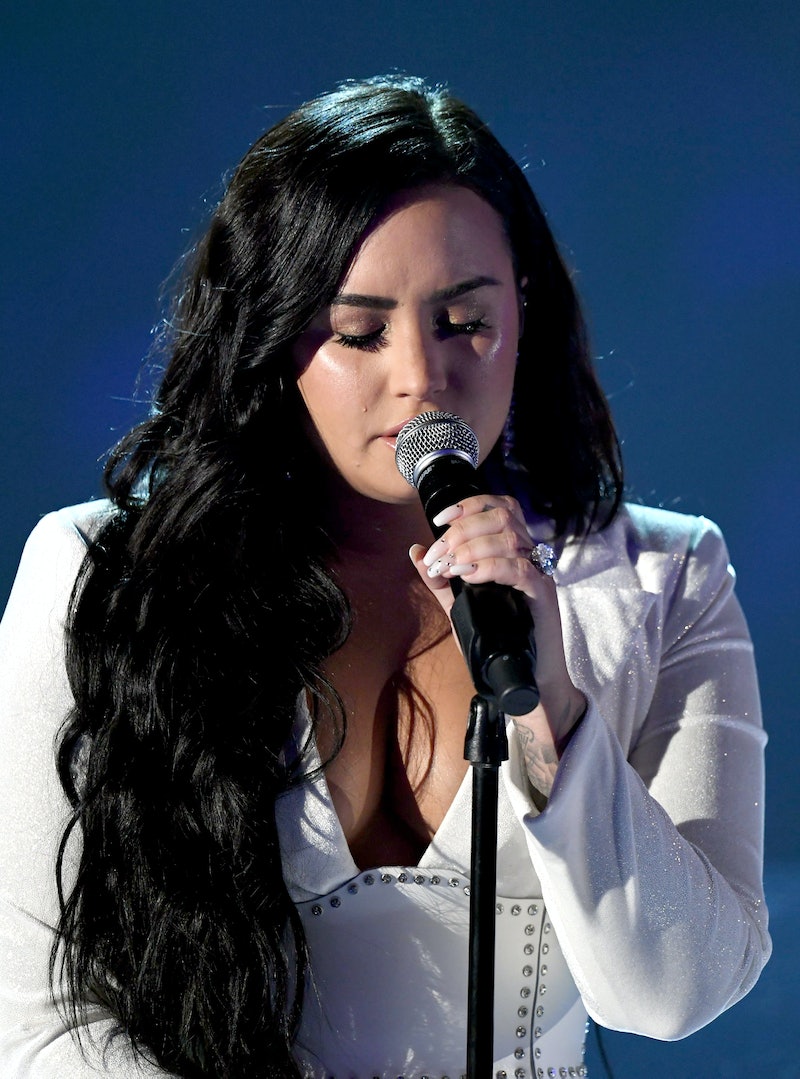 After one false start, Demi Lovato debuted "Anyone" at the Grammys, and her emotional performance had both the singer and the crowd in tears. Lovato returned to the stage for the first time since her overdose in July of 2018, and she was so emotional, she had to take a moment to restart her performance before getting through the first few lyrics.

Despite her false start, once Lovato got started, she delivered a triumphant performance, earning a standing ovation from the crowd, and even her accompanist. The performance was especially emotional because of everything the singer went through to get to this moment. In her first solo Grammys performance, Lovato premiered "Anyone," her first new release since her overdose. And the song, which was written before her most recent round of treatment for substance use, gives fans a heartbreaking look at how she felt leading up to her overdose.

A few days before the show, Lovato teased her new track, telling Zane Lowe of Apple Music's Beats 1 that the song has taken on a new meaning since her overdose. "I almost listen back and hear these lyrics as a cry for help," she explained. "I was recording it in a state of mind where I felt I was OK, but clearly I wasn't." And it was with all this emotion and more that Lovato took the stage on Sunday, Jan. 26, which no doubt helps explain her tears early on in the performance.

Fans at home and in the audience were equally moved, expressing their love and emotions on Twitter.

This isn't the first time Lovato has made an emotional musical comeback. In 2011, after a very public struggle with substance misuse and entering treatment for self-harming and bulimia, Lovato released "Skyscraper," a song that, like "Anyone," was written and recorded before she entered treatment. It's become a favorite among Lovatics, not just because of its emotional weight, but also because it helped relaunch her career post-Disney Channel stardom. "Anyone," which was released for purchase on Apple Music just before her live performance, will likely mark the beginning of another new era for Lovato. And we couldn't be more ready.

More like this
What Demi Lovato Really Thinks About Child Stardom, Depression, & Sobriety
By Radhika Menon
Demi Lovato Might Stop Touring Forever Due To Being "So F*cking Sick"
By Jake Viswanath
The New Bachelor Will Be Announced Next Week & Here Are The Top Contenders
By Grace Wehniainen
Ed Sheeran’s Surprise Gig Included An Iconic Britney Spears Tribute
By Bustle Editors and Darshita Goyal
Get Even More From Bustle — Sign Up For The Newsletter