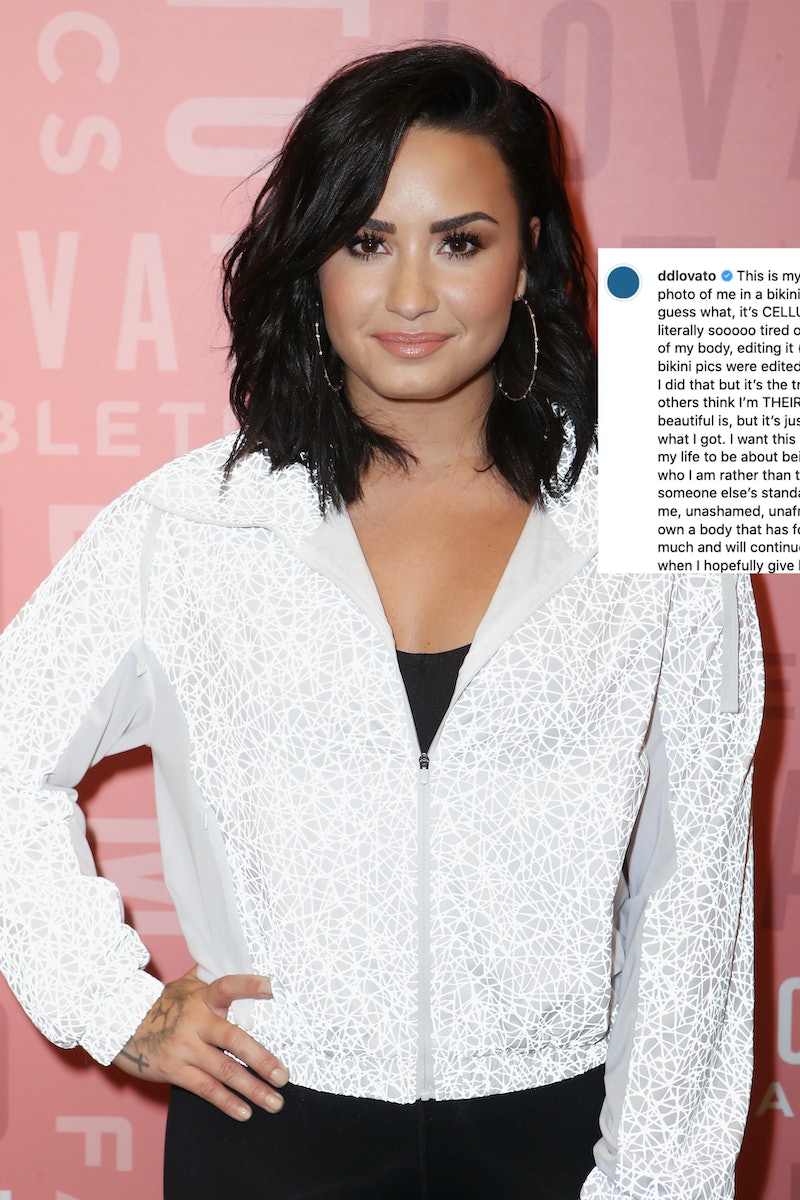 For so much of her career, Demi Lovato has been open about her mental health and her experience with battling an eating disorder, and now, she's showing how far she's come. On Thursday night, Lovato shared an Instagram post about body acceptance that celebrated her living her life as her most authentic self. Not only did she share a photo of herself totally unedited, but she also shared an update on where she is in her body acceptance journey today.

In the photo, Lovato is posing in a leopard print bikini, posing in the water during a trip to Bora Bora she took with her friends earlier this year. She admitted that sharing a photo like this is her "biggest fear," but went on to share why it was so important to her to take that step — which included admitting that other photos (which may include this Instagram post from May) she shared from her trip had been edited.

"I’m just literally sooooo tired of being ashamed of my body, editing it (yes the other bikini pics were edited - and I hate that I did that but it’s the truth) so that others think I’m THEIR idea of what beautiful is, but it’s just not me," the singer wrote. "This is what I got."

"I want this new chapter in my life to be about being authentic to who I am rather than trying to meet someone else’s standards," she continued. "So here’s me, unashamed, unafraid and proud to own a body that has fought through so much and will continue to amaze me when I hopefully give birth one day."

Lovato also mentioned how great it felt to be working in TV and movies again without pushing herself to her limits, including working long days and "depriving myself from a real birthday cake rather than opting for watermelon & whip cream with candles because I was terrified of REAL cake and was miserable on some crazy diet sh*t."

She ended her post on an honest note, sharing that she's come to appreciate her body and that she's doing her best. "I’m not stoked on my appearance BUT I am appreciative of it and sometimes that’s the best I can do," she wrote. "I hope to inspire someone to appreciate their body today too."

This is hardly the first time that Lovato has opened up like this. Not only did she open up about her journey in her 2012 MTV documentary, Stay Strong, but she's also kept the conversation going since then, including her tweets about food-shaming last year. And now, her latest post seems to have resonated with a lot of people, and Lovato shared how much the response meant to her on her Instagram Story.

It seems Lovato's post inspired some of her fans to share their own unedited bikini photos, which she shared on her story, too.

It's great to see Lovato has continued to share her journey, especially since it seems to be having a positive impact on her followers. It's not easy to be this vulnerable on the internet — especially if you're like Lovato and 73.6 million people are checking out our posts — but it's clear that it already means so much to so many people.