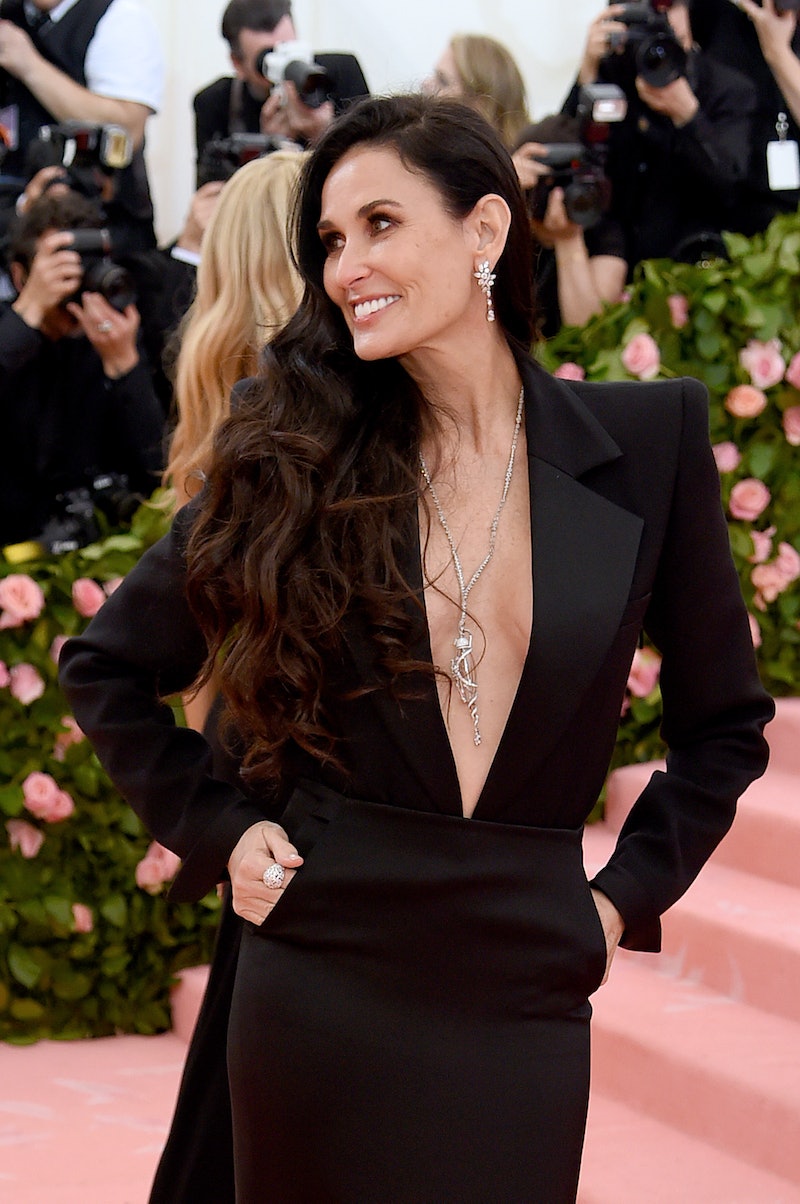 Everyone, especially '90s kids, knows Demi Moore for both her iconic films, like Ghost, Indecent Proposal, and St. Elmo's Fire, and high-profile marriages to famous actors Bruce Willis and Ashton Kutcher. And while many of her struggles were just as chronicled in the tabloids as her successes, Moore is taking control of her narrative and speaking out. In a new profile for The New York Times, Demi Moore opened up about her miscarriage, her relationship with Ashton Kutcher, the health crisis that followed, and how she recovered from it all.

In the new interview promoting her memoir, Inside Out, Moore reflected on her relationship with Kutcher, saying that it felt like “a do-over, like I could just go back in time and experience what it was like to be young, with him — much more so than I’d ever been able to experience it when I was actually in my twenties.”

The outlet also revealed that the couple suffered a miscarriage about six months into the pregnancy, and that they had planned to name their daughter Chaplin Ray. Soon after the tragedy, Moore reportedly started blaming herself for the loss and started drinking again. After they got married in 2005, they pursued fertility treatments to get pregnant again. But later, according to the profile, the actor also started using Vicodin and drinking even more before reportedly learning that Kutcher had cheated on her. Bustle reached out to Kutcher's representatives for comment on these cheating allegations, but did not receive an immediate response. (As noted by BuzzFeed, Kutcher himself seemed to refer to allegations of infidelity in 2017, though he did not confirm or deny the rumors.)

Moore isn't just talking about her past relationships, however. She also opened up about her health, and how she recovered after she separated from Kutcher in 2011. Following a seizure in 2012, Moore began to experience more health issues, including autoimmune and digestive problems, though she refrained from giving too many specifics. “Something was going on, including my organs slowly shutting down,” she told The New York Times, adding that “the root was a major heavy viral load.”

As Moore told the Times, she gradually began to recover both physically and emotionally. She completed a rehab program for trauma, codependency, and substance abuse, and worked with an integrative medicine doctor for her physical health problems. As she began to feel better, she started writing her memoir, Inside Out, where she talks about everything from her health and family to her career, and those high-profile relationships.

And if her co-writer Ariel Levy is to be believed, the actor is not holding anything back. “Let’s just get it out,” Levy remembered telling Moore in her interview with the Times, “and in the end, anything that you’re like, ‘That’s actually too private,’ we’ll take it out. And that step kind of never happened.”

If this first profile is any indication, it's clear that Moore is ready to tell her own story. "It’s exciting, and yet I feel very vulnerable,” Moore said. “There is no cover of a character. It’s not somebody else’s interpretation of me.” The book will be released on Sept. 24, and while many might see this memoir as fully of juicy gossip, the actor insisted that she is not looking to shame any of her exes or reveal anyone's dirty laundry. "I'm definitely not interested in blaming anyone," she told the Times. "It's a waste of energy."

With a new memoir on the horizon and a new film, Corporate Animals, hitting theaters on Sept. 20, it's clear that Moore is ready to move forward from her past relationships and health struggles, and hopefully that's something no one will take issue with.