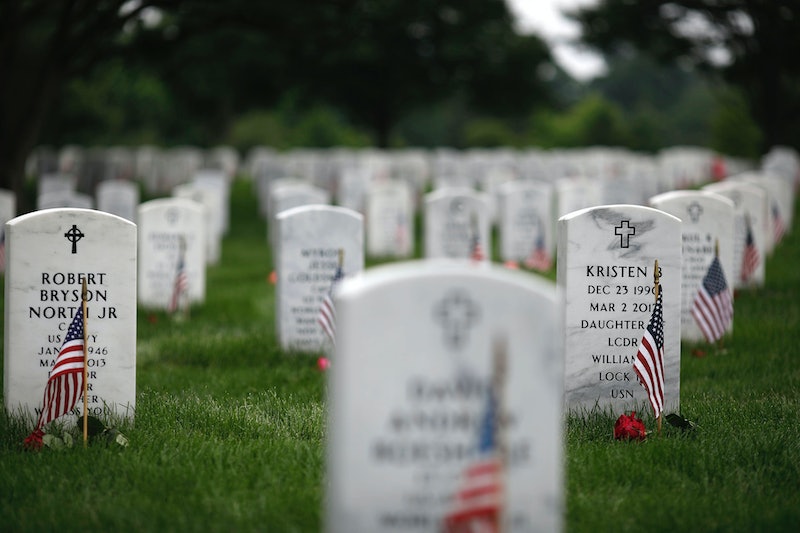 Several 2020 presidential candidates put politics aside this Memorial Day in order to team up for a touching tribute to veterans. Spurred by a request from VoteVets, a political non-profit dedicated to advocating for veterans' needs, Democratic candidates made a Memorial Day video to honor the sacrifices of military service members.

"We asked [Democratic] presidential candidates to honor the true meaning of today," VoteVets wrote Monday in a tweet featuring the video, which was put together by NowThis News. "Here is what they sent. We thank them all, and remember all those we lost in war."

In the video, a slew of Democratic 2020 candidates — just about the entire 2020 roster, in fact — tell the stories of military service members who lost their lives while serving their country. It kicks off with South Bend, Indiana Mayor Pete Buttigieg, who is himself a veteran having served with the Navy reserve in Afghanistan, commemorating the life of Sergeant David Johnson-DeFord. According to Buttigieg, DeFord joined the National Guard after 9/11 after having already served in the Army years before. He was killed in Iraq in 2004.

"His sacrifice is one of so many that we need to recognize this Memorial Day," Buttigieg said.

Rep. Tulsi Gabbard, who is also a veteran, paid tribute to Staff Sgt. Frank Tiai of American Samoa, a service member she'd served with before he was killed in Iraq in 2005.

Another veteran in Congress and 2020 candidate Rep. Seth Moulton remembered James Hassell of Alabama, a Marine he served with in 2004 and called "one of my heroes from the Iraq War." According to Moulton, Hassell saved the life of another injured Marine by carrying him on his back through machine gun fire to safety.

VoteVets' video also included tributes from Reps. Eric Swalwell and John Delaney. they told the stories of Special Forces Sgt. First Class James F. Grissom, who was killed in Afghanistan in 2013 during his fifth overseas deployment, and Army Sgt. Sherwood Baker, who was killed in Iraq in 2004, respectively.

Presidential hopeful Sen. Cory Booker shared the story of Henry Svehla, an Army service member who sacrificed his life while serving in Korea in 1952 to save his platoon from a grenade. "I honor his memory," Booker said. His tribute is followed by one from Sen. Bernie Sanders, who remembered Staff Sgt. Thomas Fogarty, who was killed in Afghanistan in 2012.

Sen. Elizabeth Warren paid tribute to Specialist E.J. Murphy, a 22-year-old who died while serving in Syria in 2017. Fellow 2020 candidate Sen. Kamala Harris commemorated the life of Lt. Ken Ballard, an Army tank commander killed in Iraq in 2004. Sen. Kirsten Gillibrand recounted the life and death of Army National Guard Sgt. Patrick Ryan McCaffrey, who was killed in Iraq in 2004. "Sgt. McCaffrey was known for living his with integrity and professionalism and he paid the ultimate sacrifice for our country," she said.

Former Colorado Gov. John Hickenlooper remembered Staff Sgt. Christopher Birdwell, an Army service member who was killed in Afghanistan in 2012. His tribute was followed by Andrew Yang's remembrance of Sgt. James Ayube, an Army medic killed by a suicide bomber in Afghanistan in 2010. Presidential candidate Marianne Williamson paid tribute to Army Lt. Seth Dvorin, who was killed while attempting to dismantle a roadside bomb in Iraq in 2004.

The video's final tribute comes from New York City Mayor Bill de Blasio. He shared the story of U.S. Marine Christopher Slutman, a 15-year veteran of the New York City Fire Department who was killed in action just last month. "He served us with such distinction, as he served this nation," de Blasio said.