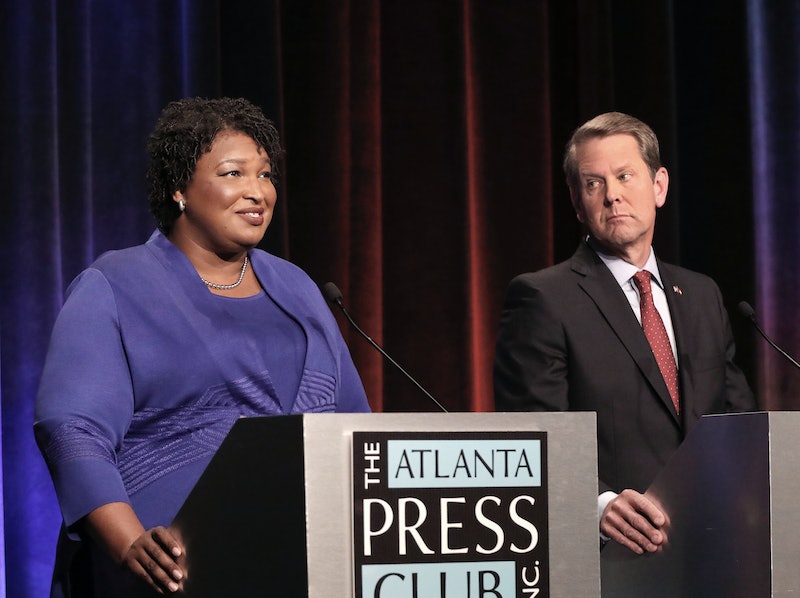 The new Democratic majority in the U.S. House of Representatives is again flexing its oversight muscles. On Wednesday, House Democrats said they'll investigate voter suppression claims in Georgia, months after a contentious election in the state brought backlash from voting rights advocates.

The House Oversight Committee sent letters to Gov. Brian Kemp and Secretary of State Brad Raffensperger on Wednesday alerting them of the investigation. The letters indicated that the committee will look at issues relating to "voter registration, voter access, and other matters affecting the ability of people in Georgia to exercise their right to vote."

When Stacey Abrams narrowly lost the Georgia governor race to Kemp last November, she claimed that voter suppression had contributed to her loss. Her allegations centered around the fact that Kemp — who was in charge of overseeing the election as secretary of state — had purged thousands of Georgians from voter rolls.

These days, Abrams spends much of her time advocating for election reform in Georgia. She created the nonprofit Fair Fight, which has funded voting rights ads and sued state election officials for mismanagement. Abrams was chosen by the Democratic Party to deliver its response to President Donald Trump's State of the Union address in February, and she made voting rights a focus of her speech.

According to Wednesday's letters, the House investigation will pay special attention to the race between Abrams and Kemp. "The Committee is particularly concerned by reports that Georgians faced unprecedented challenges with registering to vote and significant barriers to casting their votes during the 2018 election," Reps. Elijah Cummings and Jamie Raskin wrote.

Among the issues highlighted by the committee are problems Georgians faced with voting registration. Over the course of his time in office, Kemp canceled more than 1.4 million people's registrations and placed thousands of others on hold. His actions were possible in part because of the state's "exact match" law, which required that the information on registration applications be identical to state records. People were deemed ineligible to vote if, for example, their application listed a middle initial instead of a full name. An Associated Press analysis found that black Georgians were disproportionately affected by the law.

The committee also noted the fact that some minority communities faced extraordinarily long lines to cast their votes. Some voters in Gwinnett County reported having to wait for more than four hours. Many of the problems were due to a shortage of working voting machines; hundreds of extra machines existed that officials never deployed, according to The Atlanta Journal-Constitution.

According to the letter, Kemp and Raffensperger must provide the committee with some of their records for its investigation, including: documents relating to voting machines and polling sites; communications about the "exact match" policy; and all documents related to Kemp's "ethical or legal obligations or possible conflicts of interest while simultaneously running for Governor and overseeing the state's elections as Georgia's Secretary of State."

Kemp and Raffensperger have until March 20 to get the committee their materials. After that, the investigation will kick into gear.