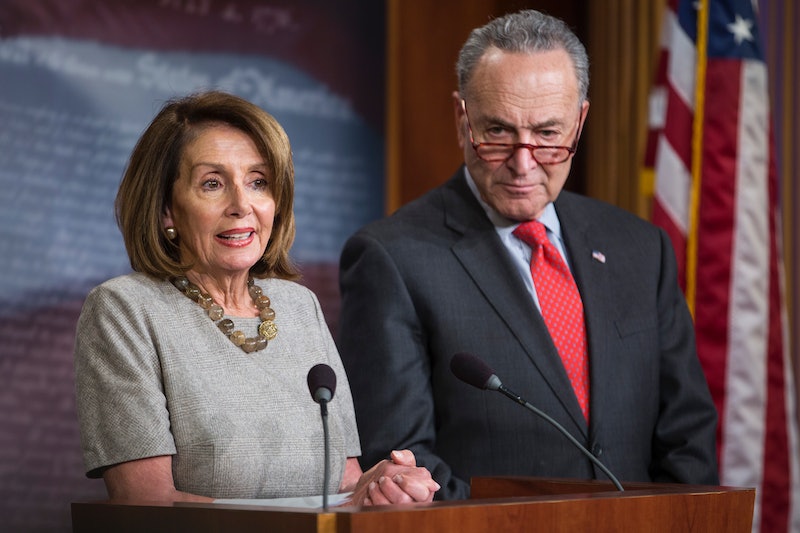 The fight to fund a border wall appears far from over. The president is reportedly slated to submit a proposal this week that includes upward of $8 billion to back such an endeavor, but Democrats say Trump's reported 2020 budget plan is just history repeating itself. In a joint statement released on Sunday, House Speaker Nancy Pelosi and Senate Minority Leader Chuck Schumer say that the money would be better spent elsewhere.

“At a time when our country faces challenges about jobs for the future, this money would better be spent on rebuilding America, and on education and workforce development for jobs for the 21st Century," the pair said in a joint statement. Bustle has reached out to the White House for comment.

Pelosi and Schumer cautioned the president against reigniting a battle that he ultimately lost just over a month ago. They vowed to push back just as hard if Trump tried to force border wall funding through Congress a second time.

“President Trump hurt millions of Americans and caused widespread chaos when he recklessly shut down the government to try to get his expensive and ineffective wall, which he promised would be paid for by Mexico," they said. "Congress refused to fund his wall and he was forced to admit defeat and reopen the government. The same thing will repeat itself if he tries this again. We hope he learned his lesson."

Trump is expected to submit his budget on Monday, according to The Hill. However, it's not a binding proposal. Instead, as NPR points out, it's more of a policy statement.

That being said, if Trump does submit the anticipated $8.6 billion request, it would signify that the president is still very serious about pushing the border wall idea into fruition. Such a request could signify that battle to fund a new wall on the U.S.-Mexico border will continue to play out in the coming months.

The request would not cover the entire wall, however, Politico reports. The administration is reportedly looking to use around $8.1 billion from the current fiscal year's funding allocations, as well as money made available by the president's emergency order.

Pelosi and Schumer aren't the first figures to argue that money allocated for a potential border wall could be best used elsewhere. When the president signed the emergency declaration, many others issued similar responses, pointing to what they dubbed "real emergencies."

Among those were Hillary Clinton, Trump's opponent in the 2016 presidential election. "The real national emergencies," Clinton tweeted last month, listing them out. "Relentless gun violence. Children separated from their families at the border. Climate change. Americans dying for lack of health care."

All signs indicate that the border wall controversy will continue for the foreseeable future. But with both Democrats and the president digging their heels into the ground, it's difficult to predict how it will play out.