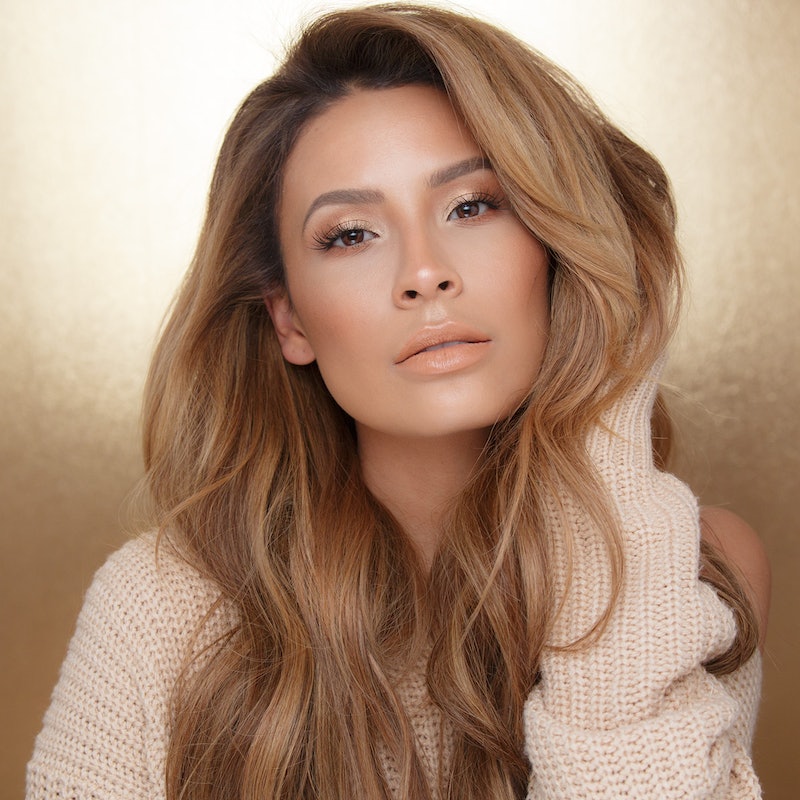 For makeup guru and YouTube megastar Desi Perkins, Halloween 2012 started off like most: scrambling for last-minute costumes for both herself and her husband, Steven. Perkins had always been an artist – drawing and painting were frequent hobbies of hers – so it only made sense to try her hand at special effects makeup to compensate for the couple's lack of costumes. When Steven showed up at the Halloween party festively clad in a dark skeleton makeup look, his friends couldn’t help but marvel at Desi’s skills.

“Everybody that night was asking who did his makeup, and if they could book me for other parties,” she tells Bustle. “I just said yes even though I had never done other people’s makeup in my life.”

Perkins became a go-to call for all special effects makeup needs in her friend group, and as word spread, she expanded into working as a freelance makeup artist for fashion runways and television shows. Looking for ways to expand her growing business, Steven recommended that she download the then-not-so-popular app, Instagram, to showcase her work.

“Steven actually made me download Instagram,” laughs Perkins. “I refused to download it — he begged me for so long. He showed me the filters and I thought they looked really cool, so I caved. Once I started posting my work on Instagram, people asked me to start a YouTube channel. I thought, ‘OK, I guess I can give it a shot,’ and look what happened.” She adds, “[My makeup career] really all just started by accident.”

Fast-forward four short years, and the Latina influencer has grown her fanbase to a massive worldwide following, with over 2.8 million subscribers on YouTube and 3.6 million followers on Instagram. Perkins’ global following has not only earned her the title of the American Influencer Awards’ 2017 Trendsetter Influencer of the Year, but has also led to sought-after (and frequently sold out) collaborations with cult sunglasses brand QUAY Australia and a limited-edition makeup collection with Dose of Colors and best friend/fellow YouTuber, Katy DeGroot.

As a Latina in the beauty industry, Perkins has found that inclusivity is not always a priority for beauty brands, and finding the right products to compliment the olive undertones in her tan skin can be difficult. One brand she feels is consistently inclusive is Make Up For Ever. “Especially when I was freelancing [as a makeup artist], I could just have all Make Up For Ever foundations and they would cover all spectrums of skin tone and undertones,” she says. Other favorite brands include Melt Cosmetics, Dose of Colors, Kat Von D (especially since Kat herself is a Latina), and, most recently, Fenty Beauty.

More than finding the right products for her skin tone, Perkins has found some personal difficulties identifying as a Latina in the beauty community. “I always think of that line in [the movie] Selena, when they say something like, ‘You’re not Mexican enough for the Mexicans, and not American enough for the Americans,’” she says. “People [online] say that I’m not Latina enough, and it’s definitely hard to hear things like that. Everyone grows up differently, and it’s not up to us how or where our parents raise us. It’s difficult to find that balance.”

On the flip side, the beauty guru is constantly floored by the influence she has on her followers.

“It’s really amazing when I get a comment saying, ‘You make me proud to be a Latina,’” she gushes. “There’s a lot of young girls — myself included, when I was younger — who face racism, or are picked on for being different, for having darker skin. When you’re young, you don’t understand how or why you’re different. I remember feeling that way; I always compared [myself to my non-Latina friends].”

She adds, “When you find somebody you can look up to who has similar features as you, and they make you proud to have [those features], that’s everything. It’s my favorite part of being a Latina in the beauty community: being able to [inspire] young Latinas to be proud of themselves. It makes [my hard work] worth it.”

Some icons who she feels paved the way for Latina women in beauty and fashion are Selena Quintanilla, Jennifer Lopez, Eva Mendes, and Sofia Vergara. Perkins has filmed a number of Selena tribute videos, including one that featured MAC Cosmetics’ Selena collection, and has amassed a whopping 1.7 million views.

“Everyone knows I’m obsessed with her,” she says. “She has always inspired me and made me proud to be a Latina, ever since I was a young girl.”

As she moves forward with her career and the beauty industry shifts toward more inclusivity, Perkins feels that brands are headed in the right direction.

“Brands are setting an example of being more inclusive: they’re coming out with a wider range of foundations, and are bringing out more [products with different] undertones. I would like to see more products with olive undertones: it’s not as prominent right now, but there’s a lot of Latinas with olive in their skin, so [finding the right shades] can be a challenge. I think [brands] could be better about showing different nationalities and skin tones in their campaigns, but we’re definitely heading in that direction, and hopefully it continues to get better.”

More like this
Kim Kardashian On The Beauty Hack That “Changed My Life, My Skin, My Confidence”
By Taylor Jean Stephan
Dua Lipa On YSL Beauty, Plus Her Fearless Approach To Hair & Makeup
By Erin Stovall
All The Products Hailey Bieber Used For Her Birthday Makeup Look
By Olivia Rose Ferreiro
Kaz Kamwi Swears By This Hair Hack For A Salon Finish In Minutes
By Shahed Ezaydi
Get Even More From Bustle — Sign Up For The Newsletter