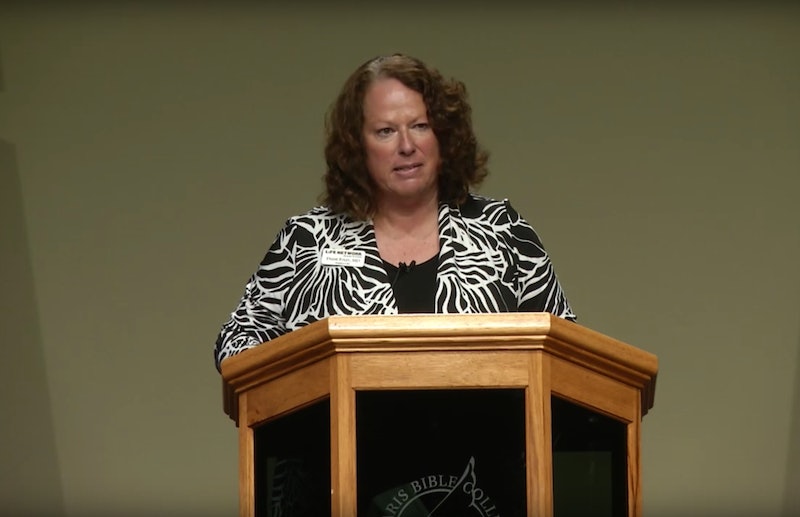 Many women are bracing for an all-out assault on their reproductive rights under the looming threat of a possible Roe v. Wade repeal. Into this tenuous atmosphere around women's health comes yet more damning information about the Trump administration's appointees — this time, about the head of the family planning program Title X. Tonic reports that Diane Foley compared abortion to the Holocaust and slavery.

Foley made the remarks during an address at Charis Bible College on Sept. 15, 2016, while she was the president and CEO of Life Network, an anti-abortion Christian group. She left the job recently and joined the Trump administration in May to lead the Office of Population Affairs, which runs Title X, a program that distributes federal grants to family planning centers like Planned Parenthood.

"People who are very adamant about abortion will say, 'This is an issue of women's rights,'" Foley says in her speech. But to her, it's actually an issue of placing more value on one life than another. "'This life doesn't have as much potential,'" she said, assuming the imagined voice of a pro-choice advocate. "'It's not worth as much because this person is living and they get to choose.'"

"There's something seriously wrong, because that sounds a lot like what our nation went through in the 1800s, right?" Foley continues. "When somebody decided somebody's life wasn't worth living or they weren't [worth] quite as much — they were worth what, three-fifths of a human?" She was referencing the Three-Fifths Compromise, in which the Founding Fathers counted each enslaved black American as three-fifths of a person in population data used for determining political representation.

Next, Foley brought up the Holocaust. "What about what was happening in Europe during the World Wars?" she continued. "Were there groups of people that were determined they weren't worth as much? Absolutely."

Foley concluded: "This is a huge issue. This is a human rights issue."

The video of Foley's Charis speech is publicly available on YouTube but resurfaced this week. Tonic brought her comments to light on Thursday after being notified about them by Senator Patty Murray (D-WA). Murray wrote a letter to some of her Senate colleagues to inform them of Foley's views on abortion and shared the memo with Tonic.

"Especially in light of the Supreme Court vacancy and President Trump's repeated commitments to strike down Roe v. Wade, it is more important than ever that we work together to shine a spotlight on the Trump-Pence Administration's constant efforts to undermine women's access to reproductive healthcare," Murray reportedly wrote in her letter. "I am writing you today to ensure you are aware of the harmful, inaccurate views held by [...] Dr. Diane Foley."

Foley's address to Charis wasn't the only time she's used dramatic historical metaphors to describe abortion. She did the same thing during a 2016 conversation with VICE News, which interviewed her for a segment on Colorado crisis pregnancy centers. These centers counsel pregnant women not to have abortions and are often accused of giving out false and misleading information. Foley's former group, Life Network, operated two of these centers in Colorado.

"If you think back over the history of our country here in the United States, laws were put in place to help protect people who didn't really have a voice," Foley told VICE News, after being asked whether she supports restricting women's access to abortion clinics. "When you think about that, and you really are logically and ethically trying to follow that back, there may be the need for legislation to help protect the most vulnerable people."

While Foley didn't elaborate further on that statement, it seems that she was comparing abortion restrictions to laws that have historically protected U.S. minority populations, like the Voting Rights Act.

In her memo, Murray expresses worry that Foley's new role will allow her "to impose her deeply harmful views on women and young people."