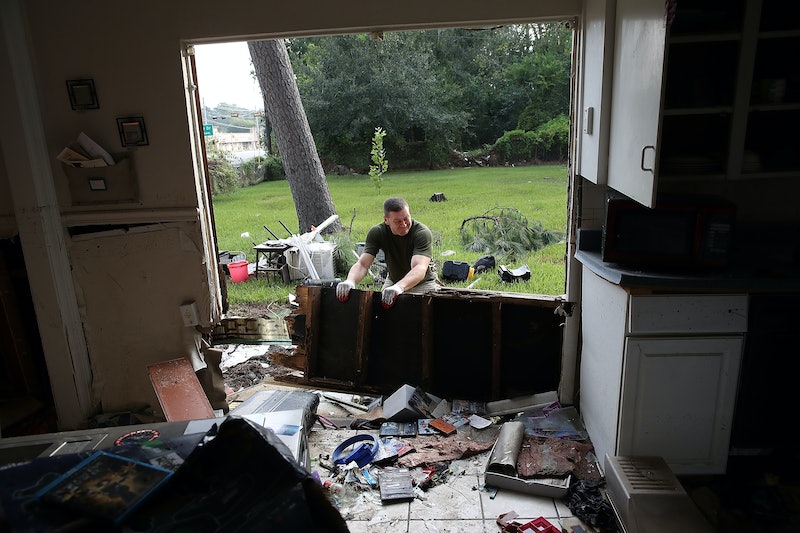 Residents in a Texas town hit hard by Hurricane Harvey are finding they have to agree to an oddly political stipulation before they can receive disaster benefits from the city's Harvey relief fund. As a part of the application process, Dickinson, Texas, residents seeking disaster relief funds are being forced to vow they won't boycott Israel in a move the American Civil Liberties Union has called "an egregious violation of the First Amendment."

At first glance, most of the requirements outlined in the city of Dickinson's Hurricane Harvey Repair Grant Application and Agreement seem fairly commonplace. Applicants must agree to adhere to all applicable building codes and safety rules and secure all necessary permits. Applicants must agree to use distributed funds solely for their agreed upon project, which could including rebuilding a home or business. But then the application asks the applicant to pledge they won't boycott Israel.

The requirement has drawn considerable scrutiny and criticism from the ACLU. "We believe that the requirement is wildly unconstitutional and we're urging anybody who is being affected by it, anybody asked to sign the certification, to contact the ACLU of Texas," ACLU Staff Attorney Brian Hauss tells Bustle.

In a statement released Thursday, ACLU of Texas Legal Director Andre Segura called Dickinson's inclusion of the requirement "an egregious violation of the First Amendment, reminiscent of McCarthy-era loyalty oaths requiring Americans to disavow membership in the Communist party and other forms of 'subversive' activity." He went on to say the government could not make public benefits like hurricane disaster relief conditional on a commitment to abstain from what amounts to constitutionally-protected political expression.

As a matter of policy, however, Hauss said the ACLU can't discuss its legal aid process. Meaning, it's unclear if any Dickinson residents have reached out to the ACLU about having been denied benefits or about filing a lawsuit against the city.

But even if not one single resident in Dickinson ends up being denied a relief grant due to a present Israel boycott, Hauss stressed that the requirement is still unconstitutional. "Anybody who is forced to sign the certification regarding their First Amendment protected beliefs, expression, and association has had their constitutional rights violated regardless of whether or not they're engaged in the underlying activity or whether or not they're going to be penalized for participating in it," Hauss told Bustle. "It is unconstitutional for the government to ask this question as a condition of granting benefits."

According to the ACLU, the Supreme Court ruled that political boycotts were protected under the First Amendment in the 1982 case NAACP v. Claiborne Hardware Co. The case involved white merchants in Claiborne County, Mississippi, who, after they'd been boycotted, attempted to sue the organizations and individuals that had participated in the boycott for lost earnings. Ultimately, the Supreme Court ruled that such political boycotts were a form of free expression and association and thus protected by the First Amendment.

So, why is the city of Dickinson asking relief grant applicants to certify that they are not currently boycotting Israel and will not boycott the country while the agreement is in effect? Dickinson City Attorney David W. Olson told ABC 13 the stipulation was required per a Texas state enacted earlier this year that prohibits all state agencies from entering into contracts or investing funds with those who boycott Israel.

"A governmental entity may not enter into a contract with a company for goods or services unless the contract contains a written verification from the company that it: (1) does not boycott Israel; and (2) will not boycott Israel during the term of the contract," House Bill 89 states. The law was signed by Texas Gov. Greg Abbott on May 2 and went into effect on Sept. 1.

"Anti-Israel policies are anti-Texas policies, and we will not tolerate such actions against an important ally," Gov. Abbott said at the bill's signing, according to his official website.

Dickinson Mayor Julie Masters told Bustle the city was in the process of "seeking clarification on the [bill's] language from the State," adding the city was compelled to follow the law as it currently reads. She stressed the state was only following State law.

But Dickinson isn't the only city in Texas to begin including such anti-BDS requirements in official contracts. A proposal request for a new police uniform contractor issued by the city of Galveston includes a section where contractors must "verify under oath" that they do not boycott Israel.

And, according to Hauss, Texas isn't the only place where similar anti-BDS laws have cropped up. "These laws have been popping up over the past few years as part of what we view as a sustained legislative assault on the right to boycott," Hauss told Bustle. He noted the ACLU was currently involved in a lawsuit challenging a Kansas law that went into effect July 1 and requires any individual or company seeking a contract with the state provide written verification they're not engaged in a boycott against Israel.

But Hauss warns such laws are dangerous in that they aim to discourage people from exercising their legal rights. "In terms of enforcement, what I think is really pernicious about these laws is they're designed to scare people," Hauss told Bustle. "If you're thinking about participating in one of these boycotts but you need access to disaster relief, for example, the easier answer is just not to do it and to sign the form and just not participate in the boycott or keep quiet about it and not be vocal about your political beliefs and why you're engaging in this boycott. That sort of chill is exactly what the first amendment is meant to protect from happening."

Bustle's request for comment was not returned by Texas Gov. Abbott.